Unless you live under a rock, you probably saw some of the kerfuffle over an upcoming Netflix special titled "Cuties". In a surprise twist, there is nothing cute about the film but it might be the most 2020 movie yet. Let's do a count of the woke points!

From what I can tell, the movie is about a black ( ✅) Muslim ( ✅) immigrant ( ✅) family living in a poor neighborhood ( ✅) in France. The father is absent ( ✅). The main character is an 11 year old black girl ( ✅) named "Amy" played by an actual 11 year old girl named Fathia Youssouf. She starts off wearing a hijab ( ✅) but soon meets a free spirited neighbor ( ✅) who is part of a "dance troupe" called the Cuties. The film is directed by Maïmouna Doucouré, and she is a black Senegalese immigrant woman ( ✅)( ✅)( ✅)( ✅). "Amy" begins to cast off the repressive traditional faith of her family ( ✅) and find freedom in dancing provocatively ( ✅).

What really got Netflix noticed was this poster for the movie. 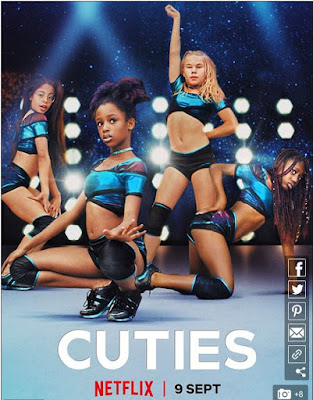 I believe all of the young girls pictured are 11 or 12 and yes they are all "twerking".

It is marketed as a "coming of age" story and an indictment of "hyper-sexualization" of young girls. That is probably a legitimate topic, even when fraught with peril, but according to reports the movie isn't intended for young girls....

Cuties has been classified as NC-17 - the strictest movie rating in the US, which bans anyone under the age of 18 from watching it

NC-17 is basically dirty movies without actual sex scenes. So who is the audience here? Granted Netflix can be watched by anyone, so young girls can watch it but that doesn't seem to be who it is aimed at.

Who could this movie appeal to, filled with young girls dressed in skimpy outfits and dancing in sexually suggestive ways?

What is the message here? That being in a traditional religious family is repressive but dancing in a sexual manner, dressing like hookers, stealing money so you can go shopping for lingerie and flirting with older boys is great. One scene in the trailer is super disturbing....

You can see the size disparity, these are older teen boys "flirting" with 11 year old girls. How cute and charming!

Netflix has "apologized" but shows no sign of pulling the movie  This isn't new ground for Netflix, which has had other shows aimed at kids like "Twelve Forever" which included a slew of homosexual characters and was written by a woman who got in trouble for revealing a sexual relationship with a 14 year old; a show called "Big Mouth" that features adult voice actors talking about puberty and pre-teen genitalia; a show called "Girl" which is actually about a boy getting his genitals lopped off. There are more but you get the idea.

This is not natural and it is not normal. I get that there are all sorts of serious and emotional issues out there revolving around pre-teen angst and such, and there always has been, but this film seems to be targeted at the kind of people who like to sniff the hair of little girls / run for President.

The entertainment world isn't about entertainment. It isn't even about money. It is all about weaponizing popular culture to undermine Western civilization. Don't subsidize it, not just by not watching this garbage but by refusing to give these freaks any money for anything they produce.
Posted by Arthur Sido at 4:05 PM