The big political news yesterday was the long awaited annoucement of who Joe Biden picked as his running mate: Kamala "Kneepads" Harris. Obviously we all know that Joe can't even pick which flavor of pudding to have for dinner so this choice was made for him but we'll pretend he had some say in the matter.

Harris brings....well, not very much to the ticket. She is from California where she isn't all that popular and that state is already locked up for Biden. Far left liberals don't like her much because she was once attorney general of California and was apparently too enthusiastic about locking up criminals and criminals tend to be non-White. I think that is what an attorney general is supposed to do but maybe the job description is different in the land of fruits and nuts. She is kind of unlikable to boot. What she brings are two things. First she has a vagina, which used to mean you were a woman and Biden promised to have a woman on the ticket. Second she is "black". That is a bit of a stretch.

Her full name is Kamala Devi Harris and her parents are a little bit unusual. Her mom, Shyamala Gopalan, is Tamil and from India. She died of colon cancer in 2009 but prior to that was a cancer researcher and has her doctorate from Berkeley. Her father, Donald J. Harris, is Jamaican although he is fairly light skinned and he also has a PhD from Berkeley, his in economics.

So she is at least partly black, and half Indian.

What Kamala is most famous for is her willingness to leverage sex to get a jumpstart in the political world. In 1994, at age 30, Kamala started dating Willie Brown who was the speaker of the state assembly and a major player in the Democrat party in California. Brown was also married, although seperated, and was the ripe old age of 60, making him only 30 years older than Kamala Harris. 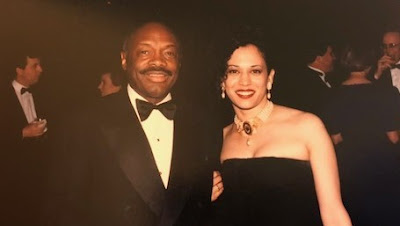 Harris was reasonably attractive at 30 and pretty successful already as a prosecutor in Alameda County. You would assume she would have no problem attracting boyfriends that were at least in the same general age as her. Instead she shacked up with a guy born 7 years before the U.S. entry into World War II. Maybe it was true love. More likely it was an ambitious woman doing what many ambitious women have done time and time again: offering her body to a powerful man to get ahead in the world. This is a good article from last year on what Harris trading sex for favors got her:

The gist is this. She landed a position in 1994, shortly after she started whoring herself dating Willie Brown on the California Unemployment Insurance Appeals Board which paid the 30 year old $97,000 annually (adjusted for inflation that is about $167,000). That job sounds incredibly boring and probably took up too much of her time, she she quit a job paying almost one hundred grand after only five months and was promptly given a spot on the California Medical Assistance Commission. This was more like it. The commission was made up mostly of old political figures who were getting a cushy payback for years of loyalty and it only met twice a month. She still managed to miss about 20% of the meetings and according to the linked story, Harris was three decades younger than anyone else on the commission, not to mention having zero background in health care. Still, she got paid $70,000 per year. Doing the math, and ignoring that she missed one in five meetings, that means that even if the twice monthly meetings lasted ten hours, very unlikely, she only worked 240 hours per year in this job. At $70,000 annual pay, that comes to almost $300/hour. She must have been very...accommodating....in the sack with Willie to score that kind of gig. She was on the commission from 1994 to 1998.

Willie Brown broke up with her a few years after they started dating when he was elected mayor of San Francisco and started dating a 32 year old White woman named Carolyn Carpeneti. Carpeneti must have been even more exciting in the sack, as Willie Brown helped her land positions that paid "at least $2.33 million over the past five years by nonprofit groups and political committees controlled by the mayor and his allies". He eventually left her and his daughter by her and shacked up with an even younger White girl from Russia named Sonya Molodetskaya who is 38 years his junior.

That is a lot of not very important information but it does give you a glimpse at the way that Kamala Harris operates. From her humble beginnings she leveraged sex to make connections in the California political world that led to her becoming California's Attorney General for six years before being elected to the United States Senate from California in 2016, the year Trump won the Presidency.

She is not the least accomplished person on a major party Presidential ticket, that honor goes to Barack Obama who did nothing of note prior to becoming President but like Kamala Harris, I suspect Barack Obama also had sex with men to advance his political career. Harris at least was a district attorney and California's attorney general where she was known for being reasonably tough on crime, something upsetting to liberals and libertarians alike. Although now that you mention it, it is getting pretty hard to tell liberals and libertarians apart on most issues. For example, fake black guy Shaun King swore he wouldn't support Kamala Harris or Joe Biden but that didn't last long: 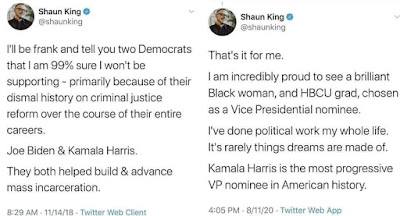 I would try to explain the hypocrisy here but Shaun isn't even smart enough to know what race he is. Meanwhile the left-libertarians are hyperventilaing because Kamala Harris put criminals in prison.

Kamala Harris Is a Cop Who Wants To Be President

Oh no, not a cop! Of course Reason magazine (😆) is using "cop" as a slur for people in authority. One example they use is the infamous "three strikes" law and a guy she used the law to try to get him the third strike 25-to-life in prison. According to Reason, it was a "non-violent" third offense but the third offense was a felon in possession of a handgun. Also it seemed from the context that the prior conviction was for some sort of violent sex crime. A violent sex crime felon who is caught with a handgun is just another violent felony waiting to happen. Throw him in jail or better yet string him up. But Reason thinks we should have people like that wandering around.

Like I said, the libertarian party, especially under the "leadership" of Open Border Jo Jorgensen and idiot court jester Spike Cohen, is getting pretty hard to distinguish from garden variety liberals. I guess they missed the part where American cities are burning because most people don't give a shit about the Non-Aggression Principle.

We also know that Kamala Harris is a big anti-gun type, which is predictable since she is from California. David Codrea has a good piece up on her anti-gun rhetoric, including "red flag" laws aimed at disarming "racists"

I have mentioned this before.

- The use of the "public health crisis" has been invoked to shut down churches in spite of the First Amendment guarantee of the right to free exercise of religion, which generally involves public worship.

- Many places are declaring "racism" to be a "public health crisis" even though it is neither a crisis nor an issue of public health.

- If you can violate the First Amendment based on a "public health crisis", you can do the same for the Second Amendment.

In other words, if you don't toe the line on race and that line is always moving, you are considered a "racist" and there is a good chance you will have your guns seized.

So yeah, on pretty much every issue she is a disaster but what did you expect from the people pulling Joe Biden's strings?

What will be interesting is to see how this dynamic plays out. Normally the VP candidates are attack dogs, saying stuff that the top of the ticket is avoiding, but their main purpose is to not hurt the Presidential candidate. With Biden losing his marbles and unable to be trusted to speak in public, I see Kamala carrying the bulk of the public appearances for the ticket, calling on people to vote for the guy she expects to replace shortly after he takes office.

Since Pence has the charisma of a bag of rice, this race is shaping up to be Trump versus Kamala, with Pence simply observing and Biden unaware he is running for President.

It should be interesting, although one advantage Trump has is his willingness to shit all over women who are his political opponents instead of trying to be gallant and gentlemanly. I expect to see some heated exchanges between those two. Hell, I wouldn't be surprised to see Harris stand in for Joe in the debates, assuming there are any debates in 2020.

Harris doesn't really help Biden other than by fulfilling the demand that he pick a "woman of color" to be his running mate but she doesn't really hurt him. No one on the Left is going to stay home and miss their chance to secure a place in heaven by voting against Orange Man Bad and she won't really inspire more Republicans to show up to vote like a Stacy Abrams would have.

If nothing else, we are guaranteed a lot great memes. 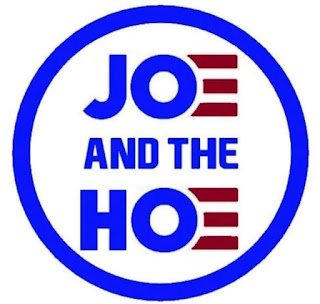