It is both depressing and incredibly freeing watching mainstream "conservative" outlets falling one after the other. 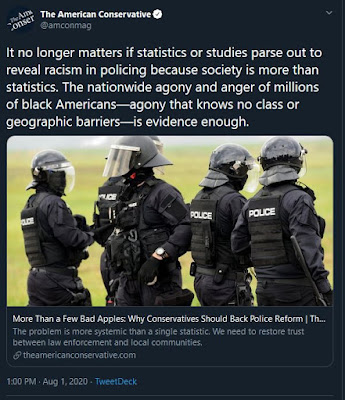 Apparently it is now "conservative" to pander to delusions and reinforce anti-police stereotypes. The reason they are angry is that they are being lied to about the police. If I was convinced that the cops were out to get me all the time no matter what I do, I would be angry too, at least until someone showed me that it wasn't true.

What "conservatives" should be focused on are the issues that lead to cops and blacks interacting negatively so often. Writing those sorts of articles gets you labelled a "White supremacist" and dis-invited from the best cocktail parties. Pandering to the victim-hood pathology of blacks gets you noticed by the right sort of people.

"Conservatism" keeps losing because it is packed full of people like the author of this piece. That has made it all the easier to simply abandon "conservatism" as a failed political ideology like libertarianism.

When you adopt a dissident mindset, you start to see the political world for what it is and recognize your actual place in it and that opens up your mind to all sorts of possibilities. You should try it, you might like it.
Posted by Arthur Sido at 2:09 PM