Are We There Yet?

There was another "unarmed black man shot by White cop" incident, this time in Kenosha, Wisconsin. The predictable riots followed.

These really are very rare but the media blows every incident up, while at the same time the media mostly ignores the endless processing of black-on-White violence. There is a reason that any racially charged incident, even something as dumb as a black kid forced to cut his dreadlocks off at some school 1000 miles away, still shows up on my local news feed.

It looked to me at first glance like this was a bad shoot but then again, as is always the case, we only had a small segment of the video to go off of. From what we can see, the black man, Jacob Blake, was being detained and then walked away from the officers. You can see them, with guns drawn, following him and ordering him to stop over and over. He ignored them. They followed him all around the car, shouting for him to stop. He ignores them. He grabs the car door handle and a cop tries to pull him back by the shirt and he still tries to get in the car. At that point the officer opened fire.

If you are the cop, what do you think is happening? It is about ten seconds from the time Blake gets up after being ordered not to, walks around the car after being told repeatedly by cops with their guns out to stop, before he opens his car door.

Is he getting his wallet? Is he going to get in the car and drive away? Or is he reaching for a pistol under the driver seat? The cops don't know and at that range you can't really wait for him to do whatever he is going to do.

Ten seconds is a long time when you are sitting in front of a computer watching a video, backing it up, watching it again.

When you are in a charged situation? Ten seconds is pretty quick.

I suppose the cops could have let him just drive away but that doesn't seem like good police work. Or they could have waited to see what he was getting from his car. I don't know about you but waiting until a guy turns and starts to shoot at me seems like a bad strategy for survival. So yes, he was shot in the back but there is a lot going on here that led up to that shooting.

As is usually the case, from Rashard Brooks to George Floyd to Jacob Blake, their death could have been easily avoided by simply complying with officer's commands. Yes, there are instances where even that doesn't prevent a shooting but generally in the overwhelming number of cases, simply complying with the police while they sort something out is going go a long way to avoiding being shot.

On the other hand, whether it was a good or bad shoot is irrelevant, as shown by the looting and rioting in Chicago when cops killed a black guy who was actively shooting at people.

As expected with the mainstream media and race hustlers on social media fanning the flames, rioting broke out across Kenosha.

Some ironic footage of a Unitarian Universalist "church" with "black Lives Matter" on their sign, in flames....

Less amusing, armed rioters facing off with a police armored vehicle.. Side note, this doesn't help the case for de-militarizing the police.


This is insane. BLM rioters armed with semi-auto rifles have shut down the street in #Kenosha and ordered a Sheriff’s vehicle to stop. Video by @livesmattershow. #BlackLivesMatter pic.twitter.com/cDhmOBG1p9
— Andy Ngô (@MrAndyNgo) August 24, 2020

Waving your rifle around is going to get someone else shot.

Oh, and Mr. Blake has a criminal record including apparently being arrested before and found to have...a handgun under the seat of his vehicle. I am stunned by this revelation. 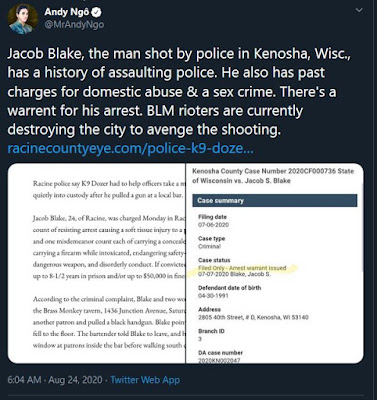 So another case of a shooting that is probably questionable but also probably, in a sane day and age, justifiable if unfortunate. Jacob Blake is not some innocent unarmed black man shot in the back, he is a violent criminal who was refusing to comply with order given by police for his safety and theirs, with a history of carrying guns in his car.

That isn't stopping the rioting. Little wonder when the mother effing governor of Wisconsin tweets this out:

"We don't have the details but allow me to disparage the police to placate my far Left base". Look at this fairy. 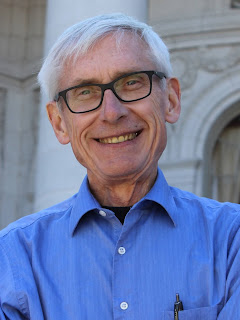 This thing is the governor of a state? When the cities of Wisconsin are burning, who will Tony Evers call upon to risk their lives to protect businesses and people? Oh that's right, the "merciless" police. 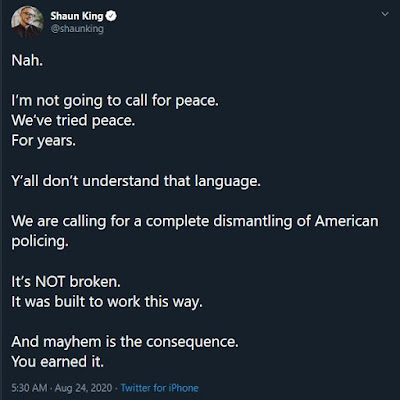 As usual, King isn't going to do anything. He is a pussy. But he can incite others, actual black men for example, to do his violent bidding for him. They don't need much of a push, nor do the antifa soyboys.

I agree with those who are warning that this might eclipse the George Floyd riots, as we are closer to the election. I think Tim Pool might be correct, this could get ugly.


If you haven't already, it's time to start preparing for a second wave of George Floyd riots nationwide

I know they never stopped but what I mean is that this next wave could be on par with or worse than the peak of the George Floyd riots
— Tim Pool (@Timcast) August 24, 2020

I hope you aren't unprepared. It isn't like you haven't been warned.
Posted by Arthur Sido at 10:36 AM