What The Star Wars Sequels Could Have Been 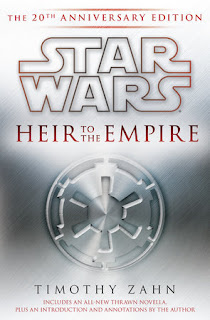 Over the weekend I banged out re-reading Timothy Zahn's book Heir To The Empire. It was published in 1991, around 8 years after the final film of the Star Wars trilogy, Return Of The Jedi, and the book takes place around five years after the events of the film. The book has aged well and especially after the trainwreck of the sequel trilogy that went a long way toward killing the most beloved movie franchise in American cinematic history.

Heir To The Empire is focused on the main characters from the original trilogy: Luke Skywalker, Princess Leia and Han Solo. Favorite secondary characters like Chewbacca and Lando also figure prominently. But the villain, Grand Admiral Thrawn, steals the action. A blue skinned, red eyed alien, he exhibits more strategic genius than Darth Vader who relied on terror and the Force to accomplish his goals, and studies the culture and arts of alien races to predict how they will react in battle.

Rather than making a clumsy new Empire in the New Order, complete with a ripped off substitute for Vader and Emperor Palpatine, HTTE is set with the Empire slowly being driven back while the New Republic tries to form a new government. The thing about rebellions is that once you win, you find yourself in control and fighting against a government is very different proposition from being the government. The Empire wouldn't simply collapse across the universe, it would keep fighting and in HTTE it does.

The book introduces a number of interesting new characters into the universe, from a mysterious woman with a grudge against Luke Skywalker to a crazy Dark Jedi. One of the most interesting inclusions is a creature called Ysalamiri, a mostly sedentary animal living in trees with the unique ability to suppress Jedi abilities to manipulate the Force. By the end of Return Of The Jedi, Luke was getting close to becoming a Deus Ex Machina and that makes him less interesting, a lesson lost on the writers of the new trilogy with near invincible Mary Sue in the character of Rey. Adding the Ysalamiri created a vulnerability for Skywalker, a sort of Kryptonite.

It might have been a bit of a challenge to adapt the book to the big screen since the main characters are much older now than they were in the book (for example, Leia is pregnant with twins in the book and Carrie Fisher was way too old to pull that off), but it was doable. Instead the decision was made to hire people who wear t-shirts that say "The Force Is Female" and other such nonsense to push a clumsy political agenda. There are contemporary political themes in the original Star Wars movie, but they are part of the story, not the entire reason for the movies to exist.

You can't imagine that anyone who knows the movie business could read those scripts and see the films being shot and not realize they were awful and would alienate the fan base. They made them anyway. Why would you do that when well written movies, faithful to the existing universe and canon, would have the potential to be the highest grossing films ever?

For the same reason we keep getting endless reboots of beloved movies. Why would anyone greenlight what was by all accounts one of the worst movies ever made, the all female Ghostbusters? How many movies have been pushed out by Hollywood over the last decade that lost huge amounts of money?

Many of us still think Hollywood is concerned about making money. That is a goal for sure but they can pump out a dozen formulaic superhero movies that White guys will pay to see and make billions. The real motivation of Hollywood is changing the culture and part of that is the idea of "decolonizing" the film world. In a practical sense, what that means is taking beloved cultural moments from the past and destroying them. There seems to be a real focus on destroying those icons from the 1980s, perhaps the last decade when America was still America and the beloved childhood and teen era for many White people.

The list is lengthy. Most remakes are garbage and replace White actors, especially men, with non-Whites. From Ghostbusters to Magnum PI to the reboot of Party Of Five, nothing is safe.

Those who are rewriting cherished cultural icons are the same sort of people who tear down statues and monuments.

Yet they sit in judgment of their betters and deem our culture, high and low, offensive to their delicate sensibilities.

Yes, it is just a movie. Just a TV show. In the grand scheme, not that important at all. That doesn't mean they are without meaning. Our culture is a reflection of who were are as a people and in spite of all of the talk of "culture wars", the neo-Marxist Left has been running roughshod over us for decades and most of us don't even realize it. There wasn't a Culture War, there has been a Cultural genocide. Can we be far from the day when having a digital copy of Gone With The Wind without the cultural explainer at the beginning will be a felony?

The vast and rich Star Wars universe has been cast into outer darkness, replaced with a pale imitation of what Marxist women think it should have been like but they can never take away the memory of what made Star Wars so enthralling and makes it still entertaining today. Those who know nothing but how to destroy can never create anything worthwhile.
Posted by Arthur Sido at 6:18 PM