The Guns Must Flow

The record sales of firearms shows no signs of slowing down: 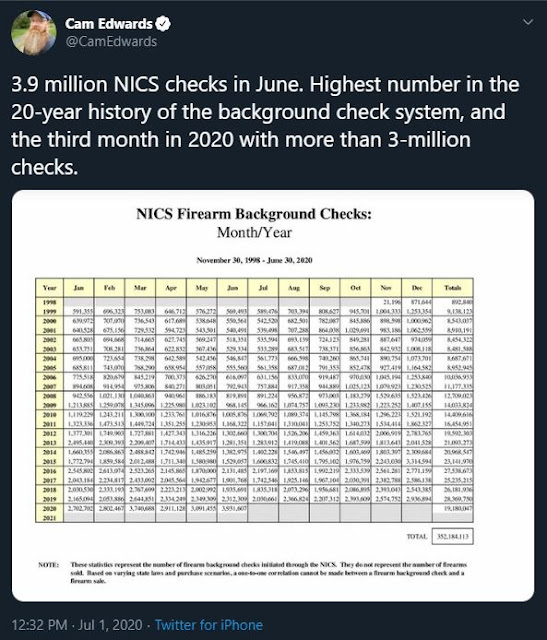 Those statistics blow a little oxygen to stoke the nearly dead embers of my otherwise blackened heart. It is quite likely we will see an additional 40 million new firearms in the hands of private citizens in 2020.

I would also suggest that these numbers would be even higher if there were more firearms being produced. Manufacturers can't keep up with demand. We are almost out of AR-15s and the main suppliers are anywhere from 4 weeks to 7 weeks out on new production. Wholesale distributors are stripped bare of all of the most popular firearms. You just can't get home defense/tactical shotguns like the Mossberg 500/590, Glocks and Taurus handguns are impossible to get, AR-15s other than the very high end rifles are out of stock everywhere and the same is true is AKs. Palmetto State often has a few for sale early in the morning but then they sell right out. Ammo? Forget about it. Anything in 5.56/.223 has skyrocketed in price and 9mm is pretty much completely sold out.

There is no reason to think this will get better later in the year as we approach the election and if anything it is likely that if the polls continue to show Trump losing, sales will accelerate.

Never before in human history have we ever seen such a massive arming of the citizens of a nation. As Marxists continue to seek to destroy our history and as racial tensions accelerate, the American people have and continue to quietly stockpile hundreds of millions of firearms and billions of rounds of ammunition. The armed citizens of America, rapidly growing weary of trying to keep the peace, are the stuff of nightmares for our would-be new Soviets commissars.

Keep producing quality firearms and we will keep selling 'em to free men and women!