Shut Up And Stop Shooting Each Other

Finally someone other than me says it:

In an impassioned press conference Sunday night, Atlanta Mayor Keisha Lance Bottoms issued a full-throated call for citizens to stop "shooting each other up on our streets," after an eight-year-old girl was shot and killed on the Fourth of July near a Wendy's that has become a flashpoint of anti-police Black Lives Matter (BLM) protests in the city.

Bottoms, a Democrat who is considered a potential running mate for Joe Biden, made the remarks as she fought through tears -- and the nation endured a new bout of urban carnage. Sixty-three people were injured and 17 killed in Chicago, including two children, over the weekend; and in New York City, 44 were hurt and at least six killed.

Some of us have been saying that for a long time. The numbers in that second paragraph are in question, as of this morning this was the butcher's bill from the Chicago Sun-Times, so I am not sure if the total was 79 or 80:

79 shot, 15 fatally, over Fourth of July weekend in Chicago

The shooters are getting more accurate as the fatality rate seems to be climbing but that also could be a function of shooting so many little blacks kids. One of the 15/17 fatally shot in Chicago was a 7 year old girl. The 8 year old girl shot and killed in Atlanta was also a little black girl.

While I don't condone it, I can see what might lead to someone shooting someone else. To me, the act of pulling a gun means I am going to use it and that means someone is probably going to die. I was taught from an early age that you don't pull a gun unless you plan to use it and if you are going to shoot, you shoot to kill. So for me that is reserved for the last resort, in the defense of myself, my family or someone else. Like most White gun owners, I don't shoot people because they upset me but still if you think someone needs shooting, I guess go for it. What doesn't make any sense to me is when someone unloads their gun into a crowd of people, especially when those crowds so often contain women and children and people you have no beef with. It is a sign of people who often collectively lack basic impulse control. 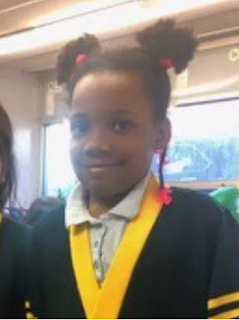 The 7 year old girl in Chicago was Natalia Wallace, pictured to the right. According to the Chicago Sun-Times story, she was visiting her grandmother:

On Saturday night, 7-year-old Natalia Wallace died after being shot while visiting her grandmother at a party in Austin.

She was outside where kids were riding on bicycles when three gunmen stepped out of a car and let off more than 20 shots in the 100 block of North Latrobe Avenue, Chicago police said.

Natalia died at the scene of a gunshot to her head, officials said. Police were reviewing video from the scene and have taken a person of interest in for questioning.

This little 7 year old girl was riding her bike with other children, something most of us did as kids and in spite of a group of children being present, 3 men who are almost certainly black, got out of a car and fired wildly at someone else but also striking this little girl in the head and killing her.

What is wrong with you that you would shoot so randomly that you hit a little girl? What possible motivation could you have for doing this that would justify putting children at risk? I can't imagine seeing this little girl and firing a gun anywhere in her vicinity.

From what I can tell, there were over 20 mass shootings across the country over the Independence Day weekend. Some "highlights" include 14 people shot in Atlanta late Saturday night when a brawl broke out after someone hit someone else with a car. Obviously when someone gets hit by a car, you should starts shooting each other. Another shooting with a big body count happened at the Lavish Lounge in Greenville, SC. They have shut down their Facebook page but I checked over the weekend and the photos were all very...diverse. The shooting left 8 wounded and 2 dead, including a mother of two young children. The Lavish Lounge apparently has a history of "calls for service" from the police, which is a nice way of saying the cops are called to this club on a regular basis. Four men are wanted in connection with the shooting and they are pretty clearly White supremacists. 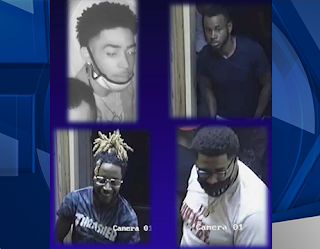 The reports of mass shootings are still being compiled but over 20 in a weekend might be a single weekend high point for the year.

The cops are pretty clearly stepping back, more of the Freddy Grey effect, and the same people bitching about "police brutality" are now bitching about the police not doing their jobs. In Atlanta the police admit they are backing off and of course that has people upset. This quote is pretty typical:

Down the street, Alethea Carter, who’s lived in the neighborhood all of her 65 years, doesn’t have many warm feelings for the Atlanta Police Department right now.

As a Black mother, she said she was heartbroken by the death of Brooks. Now she’s even more upset with the police because, after those events that brought so much pain to so many people, the police seem to be even less invested in doing right by the community. She’s saddened by the rise in shootings on the streets too.

A 65 year old black woman is in almost zero danger of being killed by the police, unless she is pointing a gun at a cop. Getting killed by a black man? That is a very real possibility. Those facts seem to escape Alethea even though she has probably spent a lifetime seeing blacks killed by other blacks. It is a testament to the power of the media that people like her think she is in equal or even greater danger from the police than she is from other blacks.

I have asked before, what makes cops get out of their cars when doing so could possibly mean getting jammed up in a situation where they could put their lives in danger, lose their jobs or even end up in jail next to the animals they try to keep off the streets? Only pride and a sense of duty I guess. That won't last long when the Federal government steps in and starts to make their jobs harder and also makes it easier to sue or prosecute them under a Biden and whoever is his VP and really running the administration.

Across the spectrum, from White liberals to black "community activists", people need to STFU about "black lives matter" until their message starts in the black community where black lives are spent so cheaply. If you care about black lives, you need to be saying to the black community: shut up and stop shooting each other.
Posted by Arthur Sido at 11:12 AM