Way back in 1987, one of the most famous hoax "hate crimes" in America took place. A young black woman named Tawana Brawley claimed she had been raped by six white guys, and was found in an alleyway in a garbage bag, covered in (dog) feces and had various slurs written on her body ("nigger", "KKK", etc.). She was immediately embraced by the usual race hustlers in the black community, most notably "Reverend" Al Sharpton back in his fat days with his Motown female singer hairdo. 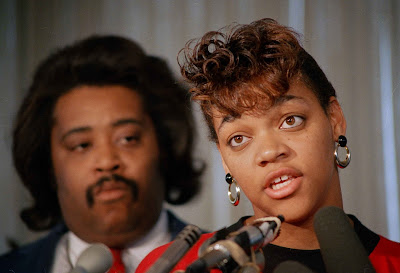 Brawley was 15 and was, to put it mildly, of low moral character, having a boyfriend in jail, and in a troubled home situation. Her stepfather, Ralph King, was an incredibly violent man and apparently also at a minimum frequently made sexual comments toward his teenaged stepdaughter.

The "case" fell apart quickly and was rejected by the grand jury, and little wonder.

In the decision, the grand jury noted many problems with Brawley's story. Among these were that the rape kit results did not indicate sexual assault. Additionally, despite her claim of having been held captive outdoors for days, Brawley was not suffering from hypothermia, was well-nourished, and appeared to have brushed her teeth recently. Despite her clothing being charred, there were no burns on her body. Although a shoe she was wearing was cut through, Brawley had no injuries to her foot. The racial epithets written on her were upside down, which led to suspicion that Brawley had written the words. Testimony from her schoolmates indicated she had attended a local party during the time of her supposed abduction. One witness claimed to have observed Brawley's climbing into the garbage bag. The feces on her body were identified as coming from her neighbor's dog. Brawley never testified.

Because she didn't testify, she couldn't be charged with perjury. Coincidence? One of the men she falsely accused of raping her was Dutchess County Assistant District Attorney Steven Pagones. It is usually a bad idea to falsely accuse a D.A. of a crime, because he sued her and Al Sharpton and won a significant settlement. As of 2013 she had just started paying him the more than $400,000 she owed. From what I can tell, Brawley who is now a nurse and has converted to Islam, maintains that the attack really happened. The most likely scenario is that she was out doing something she shouldn't have been doing and concocted the story to prevent a serious beating from her stepfather.

The reason I bring up this sordid situation, the beginning of the "hate crime" hoaxes that have continued for the 30 plus years since Tawana Brawley is a recent case that has all of the same markers. The case in question involves an 18 year old biracial woman named Althea Bernstein.

The incident allegedly happened on Wednesday, June 24th at 1 AM in Madison, Wisconsin, one of the most liberal cities in America. The "victim" claims she was on the way to her brother's house with the window of her car down. What happens next is pretty hard to believe:

The victim, Althea Bernstein, told authorities she was stopped at a red light Wednesday with her driver's side window down when she heard someone yell a racial slur. It was at that point that four white men allegedly sprayed a liquid on her face and neck and then threw a flaming lighter at her, which caused the liquid to ignite, according to the incident report.

Scared, Bernstein began to drive and patted out the flames, the report stated. She drove home, where her mother told her to go to the hospital.

She certainly has some marks on her face but they look more like abrasion than burns to me, but I am not a doctor. 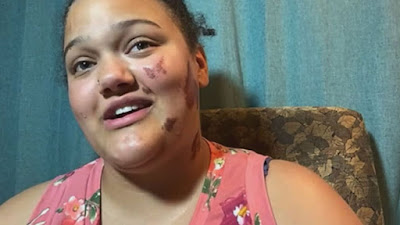 So four white guys are wandering around at one in the morning, and just happen to have a bottle of lighter fluid with them, and they see a woman who is biracial in her car and decide to shout racial slurs at her, squirt her with lighter fluid and then throw a flaming lighter at her to set her on fire. Yahoo "news" had some additional details:

Bernstein described the men as “classic Wisconsin frat boys” who appeared to be intoxicated. She said two of them were wearing all black and the other two donned floral shirts and jeans. Far right protestors in recent weeks have shown up in Hawaiian shirts to counter Black liberation demonstrations, but it is unclear at this time whether Bernstein’s attackers are directly connected to the movement.

Classic Wisconsin frat boys, wearing boogaloo gear I am sure she didn't read about earlier that day, who are out for a fun filled Wednesday night after classes are out at the University of Wisconsin, and nothing is more fun than getting drunk and lighting chubby biracial girls on fire! Good thing they brought lighter fluid with them for their evening of drunken carousing and that no one seems to have seen these guys.

According to the police report:

The victim believes she was driving on W. Gorham St. when she stopped for a red light at State St.

I grabbed a screenshot of this intersection from Google Maps and this is where it allegedly happened (click the map to enlarge it): 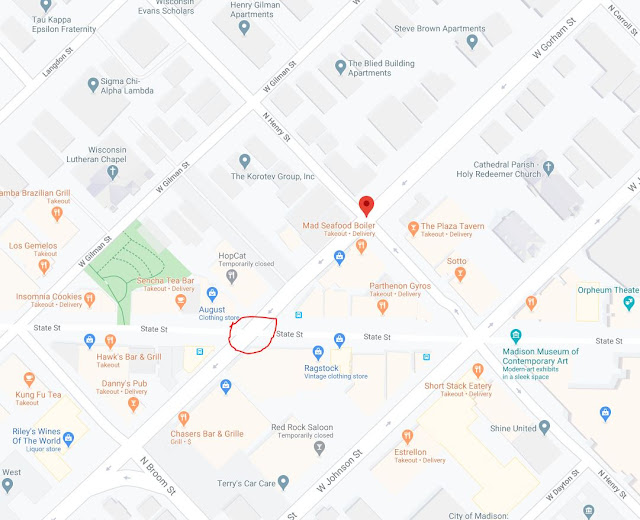 The intersection is in the middle of a very busy area with a ton of restaurants and bars but apparently there is nothing on any surveillance footage from any of the local businesses and no witnesses, even though the four men were supposedly shouting racial slurs at her. Very curious.

Also curious: anyone who has ever used a lighter know that you have to be holding it for the flame to keep burning. If you toss a lighter, it will go out. I guess they could have used an old style Zippo lighter but those are kind of expensive, at least $16 from what I see on Amazon and would have fingerprints all over them. A normal lighter like a Bic, the kind normal people carry commonly, would go out if you tossed it as she claimed. There is no word of the lighter being found in the car.

Also also curious: the "lighter fluid" seemed to have stuck to her face and nowhere else, like her clothing or her arms and chest. She only has marks on her face and neck. Lighter fluid is a very light liquid and will run like water, so it would have had to have been a pretty quick spray and toss of the lighter, which somehow didn't go out, to only burn her face.

Also curious pt. 3 : She can remember where she was but apparently can't remember much else, other than it was four white guys (no word if they were shouting "This is MAGA country!")

She said she went through "textbook shock" and hasn't been able to sleep properly.

"Once it happened I don't even remember anything, but your brain still has that fight or flight response that takes care of you. So I made it home, I called my mom, I drove myself to the ER," Bernstein said.

She said she wishes she could remember more of what happened, but hopes Madison police will figure it out.

I checked the Madison police social media and there are no updates on this "crime". Plus I Googled her name and also searched via DuckDuckGo (my preferred search engine), and all of the news is a week old and just newswire posts or a few stories about Meghan Markle calling the "victim".

On July 1st, the family released a statement (that was on picked up one place I can find) that said in part:

“As you can imagine, this has been a traumatic experience physically, mentally, and emotionally for Althea.  Our family is still asking for privacy at this time so that Althea may focus on healing.”

Privacy and focusing on her healing. That sounds a lot like "please stop paying attention or asking questions while we rake in the GoFundMe cash".

Steve Sailer did some sleuthing as well and pointed out that there was an act of arson involving what appears to be (on camera) someone spraying lighter fluid on a government building, a crime the ATF is looking into. The incident happened the same night as the "hate crime". Coincidence again?

Will the MSM Go All in on the Althea Bernstein Hate Crime Story Out of Madison?

Really I don't care if an 18 year old girl made up some bullshit story to excuse why she was out doing something she shouldn't have been doing, whatever the case. Kids do that. When you accuse four make-believe White guys of doing it to make it seem like a "hate crime"? That is a problem. Her accusation is a slander on all White people and is no different from the supposed common occurrence of White women claiming that a black man raped them.

When they finally admit she made this all up, will she be charged with filing a false police report or even charged with the arson of a government building? Unlikely. She will get away with wasting police and FBI resources and go on with her life and the media will wait eagerly for the next "hate crime" to generate clicks.
Posted by Arthur Sido at 2:11 PM