Is Trump Trying To Throw The Election?

As a neophyte albeit lifelong political observer, I have to admit to some confusion. While 2020 is unlike any election in my lifetime thanks to a pandemic, massive rioting in our cities and a man more hated by the establishment than anyone in recent memory, the election strategy for Trump seems pretty simple:

- The need for strong and decisive leadership through the coronavirus pandemic and pointing out that Joe Biden is not up to the task, without being an ass about it.

- Some kind of reasonable plan to rebuild the economy in the wake of the coronavirus. 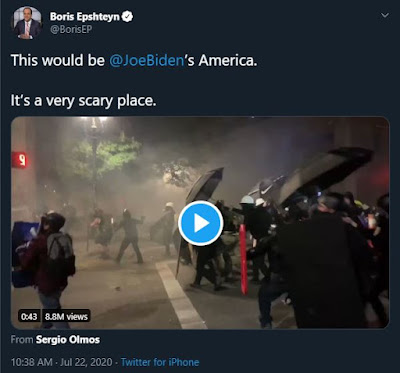 Boris, and yes that is really his name and yes he is Russian, isn't some random schlep. 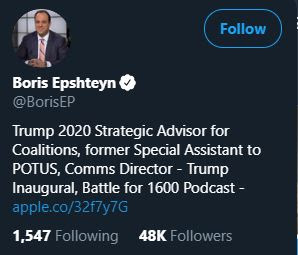 He is a real person with some level of importance and influence in the Trump campaign. But he is posting such awful stuff and getting scorched in the replies. Basically it comes down to this:

If we don't re-elect Trump, the stuff that is happening already while Trump is President will keep happening.

This is apparently a real "strategy" because Trump's sons post similar stuff.

How is pointing out how chaotic and out of control things are now, and how completely impotent to stop this Trump appears, a viable strategy?

More broadly speaking, as we approach August and are less than four months from the election, what is Trump's pitch for being re-elected? In 2016 he had a clear, simple message: Make America Great Again. It said we were on the wrong path and needed correction to make America great again. America First trade policies, controlling the border, rebuilding our manufacturing base. It was simple and clear and most important it spoke to the concerns of the people who would go on to elect Trump.

Trump was elected in 2016 on the strength of a very solid showing among White voters, especially in a handful of key states. Since 2016 his focus has often appeared to be on everyone but his base, perhaps assuming that we have no where else to go. He might be right but that doesn't mean we will all show up to vote. Since the Libertarian Party seems bent on committing political suicide with their ticket of open borders, pro-Marxist Jo Jorgensen and unfunny court jester Spike Cohen, I imagine that I will grudgingly vote for Trump, not because I believe a word he says or because I think he will win, but mostly as a middle finger to the establishment.

While I understand that polling has always been pretty sketchy and especially in an era when everyone is using cell phones and most of us don't answer numbers we don't recognize, and yes polling "registered voters" instead of "likely voters" is far less accurate as huge numbers of registered voters don't actually vote and of course the polls showed Hillary with a commanding and insurmountable lead in 2016, but even still the early numbers are pretty ominous for Trump.

In some of the critical battleground states like Pennsylvania and Michigan, two states that put Trump over the top by razor thin margins in 2016, Biden has an enormous lead:

In that poll, Biden leads Trump in Pennsylvania by a huge margin right now, 50 to 39%:

Michigan is not much better, Trump is trailing by 9% in the Wolverine State:

The detailed Michigan numbers are pretty interesting but expected....

Women give Biden his lead.  They back him over Trump by an 18-point margin (53-35 percent), while support among men splits 45 percent apiece.

Women can't stand Trump because he gives them the bad feelz. More on this in a future post. Biden's lead among non-white voters in Michigan is enormous, 61%. I am guessing that works out to something like 19% Trump to 80% Biden (a difference of 61%). All of that pandering hasn't done much to move the needle.

Also interesting after digging into the data. Gretchen Whitmer, Michigan's governor with the misshapen and enormous noggin, has a 64% approval rate in spite of some of the most draconian lockdown measures of any state. People want to feel "safe". A lot of my acquaintances from Michigan think everyone there hates Whitmer but that doesn't appear to be the case. 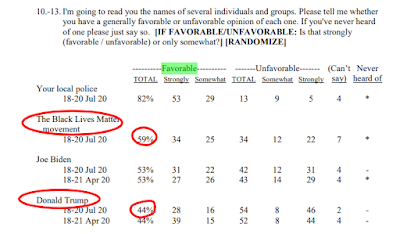 A racialist, Marxist and violent movement is a lot more popular than Donald Trump in Michigan. That is pretty scary.

It is not just states Trump barely won in 2016. Once stalwart conservative bastion North Carolina is definitely in play:

What is worse, Trump seems to be dragging down Thom Tillis, the incumbent Republican Senator up for re-election in November while the Democrat incumbent Governor, Roy Cooper, looks to be coasting to a second term:

I have said before that there is a significant risk not only of Trump losing but that he will drag the Senate down with him and Chuck Schumer and the Democrats will take the Senate majority. The story in North Carolina is the same everywhere in the country: 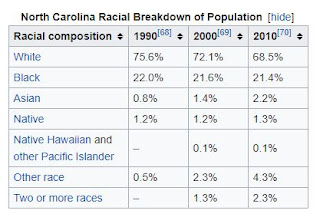 The White electorate is shrinking and unlike the non-White voting blocks, the White vote is sharply divided with no room for error.

The big difference is not that Trump is going to lose bigly among black, mestizo, Asian and Jewish voters. We already knew that, Breitbart and Candace Owens fans notwithstanding. What might make a Biden win into a landslide is that Trump is losing support among White voters: 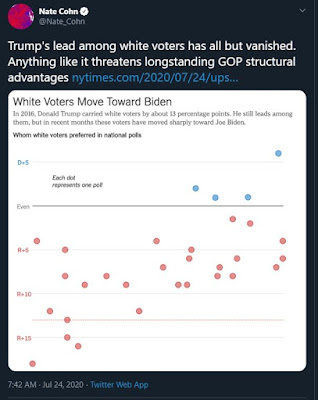 Trump can win without blacks and mestizos, he did in 2016. He can't win without White voters. Biden is going to crush Trump with White women but Trump also seems to be losing White men. Even picking up a few points among non-Whites, which is highly unlikely, won't be enough to offset his losses among White voters. Look at these numbers:

Biden is ahead in Georgia and Ohio, by slim margins, but Trump is ahead in Texas by a single percent. Texas is the Republican version of California, a reliable state with a huge population but it appears to be in danger of being lost. Trump won Texas in 2016 by 9% which would seem to indicate he should win again easily until you recall that Senator Ted Cruz won re-election in 2018 versus Beto O'Rourke by only 50.9 to 48.3, just over 2.5%. Again the same old story explains why Texas is going to be competitive in 2020. 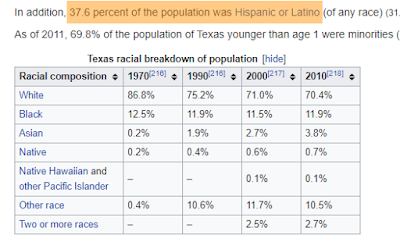 Demographic charts on Wikipedia often lump mestizos in with Whites to disguise the extent of the demographic replacement but the info is there. With 1/3 of the population being mestizos, 12% black and almost 4% Asian, Texas is barely majority White and probably in truth is already less than 50% White as this chart is a decade old. Ten years ago almost 70% of babies in Texas were non-White and guess how those babies who are now around 10 are going to vote when they are old enough in 2028?

The theme continues in other must-win states for Trump like Florida and Georgia: the White population is plummeting and younger generations are trending drastically less White:

It bears repeating. Trump won in 2016 because of narrow wins in Wisconsin (22,748 voters), Pennsylvania (44,292 votes) and Michigan (10,704 votes). Those three add up to only around 77,000 votes out of a total of 136 million cast, a tiny percentage of the total. In four years it is reasonable to assume that thanks to natural deaths from old age, and the coronavirus that tends to be fatal only to older people, that Trump has lost far more 2016 voters to death than made up his winning margin in 2016, not to mention four years of a significantly less White electorate turning 18 and being fired up to vote against him.

What all of this means is that Trump has no margin for error and yet his "strategy" is baffling to me. That brings me full circle to the title of the post. Is Trump just bored and throwing the election, expecting to lose and creating a narrative where he can blame it on voter fraud? Who is advising him other than his loathsome son-in-law Jared Kushner.

It seems like Trump has gotten nothing but bad advice since Steve Bannon left the inner circle and now Jared Kushner appears bored with his role as the Gríma Wormtongue of the Trump administration. Whatever he thinks his "strategy" is, it looks like he wants to get back to drinking the blood of infants or whatever Kushner does when he isn't sabotaging his father in law's re-election bid.

If Trump is serious about winning re-election, he needs to get some sort of coherent message that will appeal to his White voting base, without alienating too many non-Whites. Depending on people to vote for him because Biden is mentally incompetent isn't taking into account how much tens of millions of people hate Trump.

Maybe things will change once Trump gets on the campaign trail and starts holding rallies. For certain he will be able to pack stadiums with supporters, even in a "pandemic" and Joe Biden would be lucky to fill a broom closet, even if his handlers let him out of the basement. Perhaps he can trick Biden into agreeing to a bunch of debates and get Gropin' Joe to have a public meltdown on stage. That might work but it is relying on a lot of things to happen just right. It is very early but without the national nominating conventions and with crowd venues being limited due to coronavirus, the outlook is pretty grim.

Honestly, it looks to me like Trump is either bored with being President or he knows he isn't going to win anyway and is just throwing in the towel.
Posted by Arthur Sido at 10:58 AM