Dissent Will Not Be Tolerated

The social media Stasi got another one last night.... 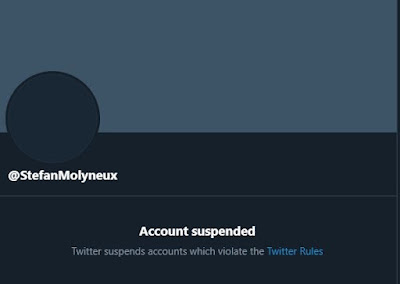 Stefan Molyneux styled himself a philosopher. I guess he was. My idea of a professional philosopher is captured pretty well by Mel Brooks in History of the World Part I as Comicus the stand-up philosopher:


Great movie, made back when it was OK to laugh at things that were actually funny. Anyway.

Stefan was kind of amusing and interesting. Most of his stuff was a little pretentious, OK more than a little, and a lot of it wasn't all that exciting but every once in a while he would say something on Twitter or in a video that upset people, and that is always worthwhile. He talked about IQ differences by group and sometimes even mentioned The Chosen People™ in a fashion other than fawning devotion accompanied by a taxpayer funded check to Our Greatest Ally™. That got him suspended from Twitter right after his very popular Youtube channel with nearly a million subscribers was deleted.

Was he a "White supremacist" or even a "White nationalist", or perhaps a garden variety "racist"? Not that I could tell. So why was he targeted?

We don't have to guess. Talking about group differences in IQ is a no-no but he has been doing that for a while and gotten a pass. His real "crime" was being a sort of gateway drug to the edgier parts of the Right wing. From "Oliver Darcy", an Iranian immigrant who apparently doesn't even use his real name and seems suspiciously guarded about his personal life (I have a theory about that)...

"Darcy" is a "senior media reporter" for CNN and it seems that most of his time is spent chasing around the vestiges of Hillary's "vast right-wing conspiracy" with his little buddy Brian Stelter. He seems obsessed with Fox News, Orange Man Bad and the "alt-right", a term and movement that no one has talked about for a couple of years but he apparently still thinks is a thing. Clearly he has his finger on the pulse of the American Right.

He is uncharacteristically open here when he mentions that Stefan Molyneux was suspended in part because he provided a safe way for people to start asking the sort of questions we are normally forbidden to ask. In other words, Stefan wasn't all that bad but he opened the pathway for people to start to seriously consider voices that are bad. Molyneux didn't really get into the clumsy racial insults or putting the names of Jews in (((parentheses))), but he did provoke thought and conversation. This is the same reason that a clown like Richard Spencer is allowed to stay on Twitter and yet Jared Taylor of American Renaissance is not. Even if Spencer is not paid controlled opposition, he is such a goofus that he serves a purpose as the Snidely Whiplash of the Right, a cartoonish villain who looks like an extra in a James Bond film. He is easy to pick apart and mock, so he isn't a threat. Jared Taylor? He is serious and sober and highly intelligent. He doesn't froth at the mouth, he presents his facts and assertions in a calm, rational and reasonable manner. So he had to go, first from Twitter and then more recently from Youtube.

Stefan Molyneux, for all of his pretentiousness, asked some important questions and those questions led to a lot of people asking more questions and that rabbit hole leads people out of the false political dichotomy we are supposed to say within. He wasn't the first to go and he won't be the last but he is one of the biggest. The social media tech giants are squeezing tighter and tighter as the election gets closer. We might even see milquetoast "conservatives" like Jack Posobiec or Li'l Ben Shapiro get booted. The media got lazy and complacent when Trump won his narrow victory in 2016, they don't plan on making the same mistake again especially since Biden is barely coherent these days.

Stefan still publishes videos on Bitchute but that is a much smaller audience than what he had on Youtube. You can also find other banned content like American Renaissance and Infowars so if you aren't watching videos on Bitchute, you should be.

You need to be proactive in seeking out alternative voices. Relying on the permitted voices, even "conservative" voices like Fox News and Rush/Beck means only getting part of the story. Information is power and right now the power is skewed heavily toward the Marxists. Take back your mind.
Posted by Arthur Sido at 9:20 AM