Oh Bubba Smollett. Have you no shame?

Hoax "hate crimes" have a predictable pattern. Some poor person-of-color, not to be confused with a colored person, concocts some crazy story about being attacked in the middle of the night by White guys shouting "This is MAGA country!" or that someone scribbled nigger on their door or that four Wisconsin frat guys set them on fire while they were in their car. When people start to question the story, your defenders always cry "What reason would he/she have for lying about this?". Later when it invariably is shown to be a hoax, the media hushes it up and it just disappears.

It is the outraged insistence that no one would have a reason to lie about being a "victim" of a "hate crime" that I want to get back to. It is rare that anyone making a hoax hate crime accusation suffers any consequences for it, unless you are famous (Jussie Smollett) or the case gets intense media coverage (Tawana Brawley). Often the "hate crime", even after shown to be a hoax, still has the desired effect. At St. Olaf College in Minnesota (seriously, what is wrong with that state?) there was a clumsy "hate crime" and the university immediately bent over and gave in to the demands, even though the "hate crime" never happened.

That brings me to the sordid tale of Bubba "Not Jussie" Wallace and the infamous garage door pull rope noose that a crew member "found" in the garage he was assigned at Talladega. When it became obvious that the whole thing was made up, after an FBI investigation of course, Bubba Smollett Wallace declared that "he had no regrets" about this divisive and obviously silly hoax. He has been scorched on social media and Trump even took a shot at him, but Bubba don't care because Bubba is getting paid: 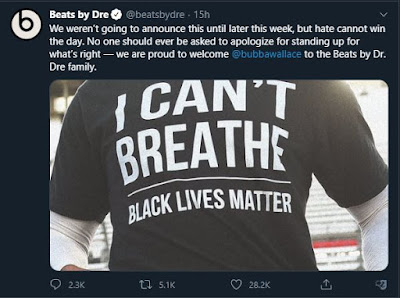 Nothing happened to Bubba Wallace and he didn't even have the decency to apologize for what he put NASCAR fans and America through. Then he lands a nice endorsement deal. Not bad for a mediocre driver no one had heard of outside of NASCAR circles before this whole farce.

So why would someone fake a "hate crime"? Simple, it provides notoriety and often some financial gains and the odds of anything negative happening to you are slim and getting slimmer by the day. Sure, when you fake a "hate crime" it casts doubt on anyone who happens to experience an actual hate crime, but who cares as long as people like Bubba get endorsements and others get a GoFundMe account that they never have to give back?

Bubba Wallace is a lot richer and more famous today than he was before the "noose" was found. Dishonesty apparently pays.
Posted by Arthur Sido at 11:39 AM