In 1988, near the end of the Reagan years, a movie came out titled Colors. It was a film set in south central L.A. during the height of the gang war between the rival Bloods and Crips. The story followed the lives of two partners, the old shtick in cop movies of the brash young cop paired with the street-wise veteran, in this case played very well by Sean Penn and Robert Duvall respectively. It was a good film and in the spirit of full disclosure, I owned the cassette tape of the soundtrack. We thought of ourselves as quite the gangsters in our all White high school with a cornfield next to the football field.

There was one scene I always remember pretty vividly from the movie. It takes place at the funeral of a young Blood who was gunned down at the beginning of the movie and as the funeral service is taking place, a car full of Crips drives by and shoots up the church. The Bloods inside run out with guns drawn....

The reason I was thinking about this scene was a news story out of Chicago (of course). On Wednesday a funeral was being held for a black man named Donnie Weathersby. Mr. Weathersby was shot to death in Chicago on July 21st. A car pulled up and someone inside shot him in the head and torso. Mr. Weathersby's Facebook page showed the all too familiar scene in his profile picture, a group of black men standing in a group flashing gang signs and a few looking pretty stoned... 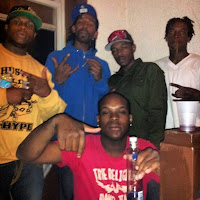 As the funeral let out, things took on a decidedly Colors theme.

That number seems to be going up, some outlets are reporting 16 people shot. This is in spite of a police presence at the funeral.....

Carter said a Chicago police squad car was assigned to guard the funeral home and was parked outside when the gunfire began.

It is pretty brazen to open fire when there is a cop parked in what I assume was a marked car at the funeral and it is also pretty sad that the police (rightly) assumed there was a significant chance of violence at a funeral but according to the story, this is quite common in Chicago. The news story also reported that several people attending the funeral returned fire and given how terrible our diverse urban Americans are at marksmanship, we are lucky that people in neighboring homes weren't hit.

That is just part and parcel of living in an American city as the barbarians living in our midst slip their leashes. You can't even bury a dead man without people trying to kill mourners.

Never fear, Chicago Mayor Beetlejuice aka Lori Lightfoot, knows what the problem is.

Well. Just as an experiment I stopped after uploading that screenshot and picked up a gun. I don't think anyone in Chicago or anywhere else suffered as a result. Since I picked up a handgun, I thought that just to be certain I should also pick up a rifle. So I did and still no one suffered in Chicago. I am beginning to suspect that people picking up guns isn't the real issue and that maybe the population in Chicago that tends to be the shooters and victims of shooting is where she should be concentrating.

Good thing Mayor Beetlejuice is worried about the right problems when her city has 15+ people shot at a funeral with a cop car parked out front, on a Tuesday when at least 23 people were shot across Chicago.

Apparently she has no qualms about the residents of Chicago terrorizing the other residents of Chicago but she simply won't allow "Donald Trump's troops", aka sworn Federal law enforcement officers, to arrest people breaking the law. You can feel the law and order returning to the Windy City!