Blacks In Chicago Shoot Each Other. Hoosiers To Blame!

Mayor Beetlejuice is at it again!

Chicago Mayor Lori Lightfoot was on "State of the Union" and as is typical tried to deflect blame for Chicago's out of control gun violence, in this case onto neighboring states.

In response to media hack Jake Tapper's question about President Trump's offer for Federal law enforcement assistance, Beetlejuice had this to say (emphasis in red mine):

Lightfoot said, “That’s classic Trump hyperbole. I sent him a letter on Monday outlining the very specific things that the federal government is unqualified to help with starting with common-sense gun control. The fact of the matter is our gun problem is related to the fact that we have too many illegal guns on the street. 60% of which, 60% of which come from states outside of Illinois. We are being inundated with guns from states that have virtually no gun control, no background checks, no ban on assault weapons. That is hurting cities like Chicago. That is the thing that if the president wanted to help and the other things I identified in my letter he could do today, tomorrow, but he is not really interested in helping in that way.”

Since Indiana is right across the border from Chicago, she is clearly talking about us. You have to assume that she knows that the vast majority of firearms sold in Indiana are transferred following a background check but she claims we have "no background checks". The people sitting around waiting for approval from the NICS system would beg to differ with her. 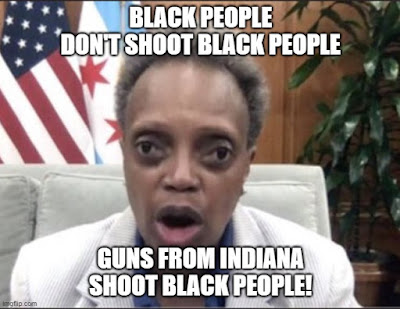 I have no doubt that many firearms from Indiana end up in Chicago and are then used in violent crime. My question is more specific.

What happens to these firearms when they cross the border? Do they suddenly become imbued with a malevolent sentience and start shooting people on their own, like the machines in Maximum Overdrive? 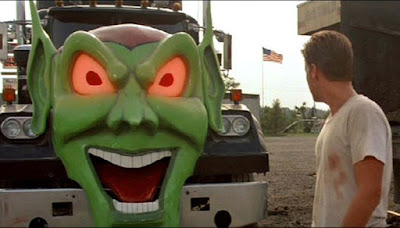 Why does Chicago have so much gun violence attributed to guns from Indiana while Indiana as a whole has relatively low rates of gun violence outside of a few segments of the state with demographic outliers?

Lori Lightfoot is simply trying to deflect blame. She knows the Chicago communities where all of the gun violence occurs and she knows why Indiana has drastically lower rates of gun violence compared to those communities, in spite of our "lack of gun control".

Guns are readily available everywhere in Indiana and we don't shoot each other.

Guns are not readily available in Chicago and yet some Chicagoan's still shoot each other.

When you admit the reason for this disparity, you are on your way to figuring out the real reason for gun violence in America.
Posted by Arthur Sido at 2:06 PM