Our old friend Mitt Romney, a "Republican" who is as reflexively opposed to anything Trump says or does as any liberal or Bill Kristol (but I repeat myself), is having a conniption because of an announced draw-down of U.S. troops from Germany.

According to our local news, the plan includes withdrawing 12,000 troops. Almost half will stay in Europe.

Defense officials say the U.S. will pull 12,000 troops from Germany, bringing 6,400 home and shifting 5,600 to other countries in Europe, including Italy and Belgium. The plan will cost billions of dollars and take years to complete. It’s been spurred on by President Donald Trump’s demand to withdraw troops from Germany, at least in part due to its failure to spend enough on defense. Defense Secretary Mark Esper says the moves promote larger strategic goals to deter Russia, reassure European allies and shift forces further east. The plan leaves 24,000 troops in Germany.

So to recap. Of the 12,000 troops, 5,600 will stay in Europe. This will leave only 24,000 American troops, paid for by the tax-payers of the United States, to defend Germany against those wiley Russians.

The replies to Romney are full of screeching liberals who are against this move because it was ordered by Orange Man Bad.

Apparently Germany is too poor to pay for her own defense. Let's take a look.... 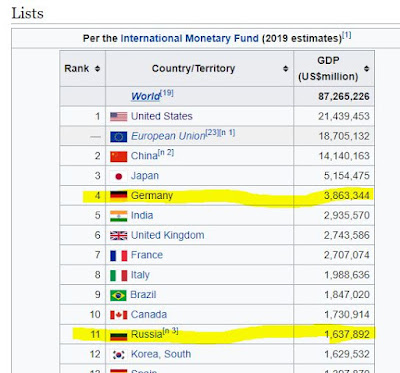 Oh, Germany has the fourth highest GDP in the world. What about per person?

Oh again. Maybe the Germans can afford to pay something for their own defense, seeing as how our troops have been there since 1945 and the Berlin Wall fell almost 30 years ago.

But come on, they might have money but what the heck do the Germans know about war?

Once again, thanks to the people of Utah for electing that turncoat imbecile Romney to the U.S. Senate.
Posted by Arthur Sido at 12:32 PM