This story from the New York Post made me laugh the dark laughter of a black-pilled nihilist accelerationist. It might be the most 2020 story so far in this young decade.

In controversial “implicit bias” training, New York City’s public-school educators have been told to focus on black children over white ones — and one Jewish superintendent who described her family’s Holocaust tragedies was scolded and humiliated, according to firsthand accounts.

A consultant hired by the city Department of Education told administrators at a workshop that “racial equity” means favoring black children regardless of their socio-economic status, sources said.

“If I had a poor white male student and I had a middle-class black boy, I would actually put my equitable strategies and interventions into that middle class black boy because over the course of his lifetime he will have less access and less opportunities than that poor white boy,” the consultant, Darnisa Amante, is quoted as saying by those in the room.

She is probably right, that is what is meant by "racial equity": discriminating against white kids, no matter how much they clearly lack "privilege" in order to focus time and especially financial resources on non-white (but not Asian or Jewish) students. 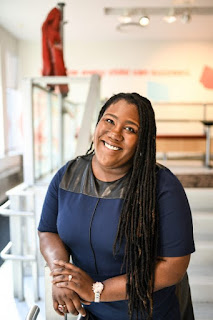 I will safely assume that Darnisa Amante probably makes an enormous salary as a "consultant". The "consulting" firm she runs, the nonsensically named "Disruptive Equity Education Project", a name clearly cooked up because it makes the acronym DEEP, received a $175,000 contract from the New York Public School system. Who knows how many other school systems are paying six figure fees to have a corpulent ignoramus tell them how to discriminate against white kids?

Darnisa Amante is a prime example of my working theory that the surest route to a comfortable and not very demanding upper middle class career for a moderately intelligent black in America is some sort of activist and/or consultant role. Her LinkedIn profile is a rich tapestry of "jobs" in "education" that includes almost no actual teaching other than half a school year as a "4th Grade Long-Term Substitute Teacher" at Hyde Leadership Charter School in the Bronx. The school's website features lots of pictures of black and mestizo kids, including a little black girl and a little mestizo girl wearing t-shirts emblazoned with the words "Flexin' In My Complexion" while both girls hold up a sign reading "No Place For Hate", capped off my the very prominent "Anti-Defamation League" printed below the slogan in bold letters, so no one is confused as to who paid for the signs. Anyway, my point being that Darnisa Amanate is being paid a huge stipend to teach educators about how to educate in spite of having less than full school year of experience as a 4th grade substitute teacher. It would be sort of like having a person with a semester of high school biology teaching professors at a medical school how to teach medicine. Hey, kudos to her for getting paid big bucks to work in "education" while avoiding stepping foot in a classroom.

That sort of nonsense is pretty typical but the part of the story that made me guffaw was the part about a Jewish school superintendent at a training who was asked about a "lived experience" that inspired her to "fight for equity" and she mentioned hearing the stories from her grandmother and grandfather about their struggles in Poland as Jews. Oops, that isn't the right kind of inequity!

“My grandparents taught me to understand the dangers of ‘targeted racism’ or the exclusion of any group, and the importance of equity for all people. This is my core value as an educator,” the superintendent told colleagues.

“At the break, I stood up and, to my surprise, I was verbally attacked by a black superintendent in front of my colleagues. She said ‘This is not about being Jewish! It’s about black and brown boys of color only. You better check yourself.’”

“I was traumatized,” the Jewish educator said. “ It was like 1939 all over again. I couldn’t believe this could happen to me in NYC!”

It is like 1939 all over again! Someone being rude at a conference of public school superintendents making high six figure salaries is just like Poland being invaded! First Hitler and now a rude co-worker! Will the oppression never end?! Being the Chosen People™ ain't all it's cracked up to be.

Meanwhile we get this sort of stuff from people like Eylon Levy making a lengthy list of monuments to Western Civilization he wouldn't mind getting rid of. Apparently he forgot or just doesn't care that his people are guests in the nations we built. 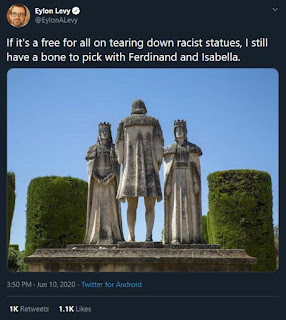 The ingratitude of people like Ilhan Omar, Rashida Tlaib and Therese Patricia Okoumou is bad enough but when the ingratitude and outright malevolence toward us from the people who have been given shelter in the nations we built and then become wealthy and influential is especially galling. Anyway, I am treading close to a naughty line....

What bears repeating now and over and over again, is that we are very early in the 2020s.

It is June of 2020. Trump is President. Whites are still technically a majority in our own country, pending the census results. In most of America outside of a few urban areas, things are as normal as they can be during an endless "pandemic".

Still this crap is already getting out of hand and is accelerating every day. We just went through two weeks of non-stop rioting and looting because a drugged up violent felon died in police custody. Communist agitators are using rampant black violence as cover to occupy sections of Seattle and Portland. Big cities are simultaneously seeing a surge in violent crime and talking about reduced funding or outright dismantling of police departments. As anticipated, not only are the statues of Confederate historic figures being removed but vandals are defacing pretty much any monuments they can find, including Lincoln who is credited with freeing the slaves and a monument to black soldiers who fought in the Civil War. Corporate America is tripping over themselves to out virtue signal each other.

Try to imagine what it is going to be like in June of 2029. I will be in the latter half of my 50s, assuming I am still around. We almost certainly will be into at least the second or third term of a permanent Democrat majority holding the White House and just as certainly both houses of Congress. What will the national debt be? $40 trillion? Will we even be keeping track and pretending we are going to pay it back? Probably half of the states will be in some sort of bankruptcy/fiscal implosion. With people like Stacey Abrams and AOC directing policy, the economy is going to be in the toilet and the number of people on the public dole will explode while tax revenue plummets. It is a given that we will deal with multiple new "pandemics" over the next decade, some mostly imaginary and some unfortunately quite real.

No matter how grim the prognosis, I think it probably understates the shit show we are headed for. By mid decade I am assuming I won't be able to blog anymore and that I will be banned from most or all social media. I will be lucky if I still have access to the banking system. By mid-decade I assume most big cities will be unlivable and unsafe to even enter at all. For several years I have been looking at a ten year timeline when I think things will come apart and I might have been too conservative. Should Trump lose as I expect he will, Joe Biden's running mate will take over shortly after he is sworn in and the Democrats have no appetite to upset their voting base by enforcing the law, at least against blacks and mestizos. We are approaching a two-tier "justice" system where whites and Asians will have to obey the law or face the full wrath of the law enforcement apparatus while blacks and mestizos can flaunt the law without consequences.

I am anticipating some sort of false flag operation to happen in the next few weeks. The riots are calming down and most people are ignoring the coronavirus restrictions. If the economy starts to bounce back and Trump can run on steering the ship more or less safely through the pandemic and paint Biden as sympathetic to looters, he still has a chance, so you can bet we are headed for a series of manufactured crises to make Trump look weak and ineffective. A mass shooting is possible, and I mean a mass shooting where the shooter is white as opposed to the very common mass shootings by blacks on a near daily basis. Trump will overreact and do something to piss off gun owners, and that will suppress his most loyal voting block. Nothing is off the table or out of reach when the entire apparatus of the government is united in their desire to rid themselves of Trump.

Six months in and the wheels are coming off in a way most of us couldn't have imagined 12 months ago. As people start to pay attention to the upcoming election, things are about to rise to a whole new level of spiciness.

Get clear of the blast zones. Review your preparations. For crying out loud, buy more guns and ammo and don't delude yourself into thinking ammo prices are coming back down. Start to prepare yourself mentally and unwind your expectations. However you thought the rest of your life would go, it won't. Being mentally tough is going to be as important as being physically tough.

We are entering the end-game.
Posted by Arthur Sido at 10:10 AM