The Politics Of Mass Shootings

Few phrases strike fear in the hearts of Americans like "mass shootings". It brings to mind the Columbine school shooting, Parkland, Sandy Hook and Las Vegas. Most Americans are convinced that mass shootings happen all the time (they do) and that they usually are carried out by white men (almost never). Like everything else in our society, the idea of mass shootings is thoroughly politicized.

I try to keep an eye on the actual incidents of mass shootings but also the news stories that talk about these events. As I pointed out last week, the prior weekend saw TEN mass shootings in a single weekend but that fact got no media attention, either as individual events or as an aggregate. So far we have seven mass shootings as of noon on Sunday. That isn't what the media is covering. When the media reports on mass media, based on an automated daily Google search for the phrase "mass shooting", what I see instead are occasional contemporary reports about recent incidents but lots of stories about the mass shooting in Nova Scotia, an even larger number of stories about the Pulse Nightclub shooting's fourth anniversary where a Muslim terrorist shot up a gay bar. The political response to the Pulse anniversary has a lot to do with "hate crime" legislation and gun control but little mention of Omar Mateen, the actual shooter, swearing allegiance to ISIS and being Muslim.

A good example of this came from a recent mass shooting in San Antonio, Texas. 8 people were wounded by a shooter who was turned away from a bar because he and his buddies were inebriated (which seems kind of weird) at which point he claimed to be a UFC fighter and then went to his truck, grabbed a rifle and started shooting. The initial story I saw on it was this one:

What caught my eye was this line:

There have been numerous mass shooting in the United States recently, including a shooting outside a Walmart at the border town El Paso in August 2019, that left 22 people dead.

Recently? That was almost a year ago. So I thought, sure it was also in Texas, to give him the benefit of the doubt but then I looked a little closer. Based on some generally lazy research, I came up with around 17 mass shootings in Texas this year alone. So why did the mass shooting in an El Paso Wal-Mart from last year get mentioned again? Yes there was a high body count but the bigger factor was that the shooter, Patrick Wood Crusius, was a young white man who expressed "anti-immigrant" sentiments. In other words the poster boy for mass shootings.

I run into people online all the time who swear that most mass shooters are white men. They will post a montage of white mass shooters going back several years to "prove" their point. When you show them that the actual incidents of mass shooting are overwhelmingly committed by black men, they simply refuse to believe it even when you show them photographic evidence like this of people charged or arrested in connection with a mass shooting in 2019. 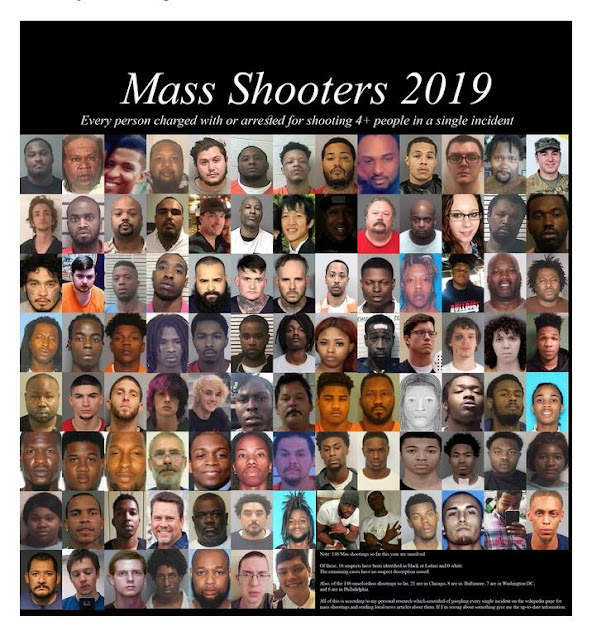 A handful of white guys, a few mestizos, one Asian I see and a whole bunch of black guys. Keep in mind there were over 400 mass shootings in 2019 and only a small fraction had people charged but a casual examination of the shooting patterns, where they happened and who was shot, strongly suggests that the overwhelming majority of mass shooters in 2019 were black men.

The media knows this is the case but still focuses almost exclusively on the rare white mass shooters? Why?

One reason is that white mass shooters tend to have much higher body counts, both in terms of people shot in total as well as in deaths. When a black guy shoots into a crowd, it is not unusual for 8-9 people to be wounded and no one died. The black mass shooter tends to use a handgun that they are apparently not familiar with shooting and is shooting wildly and at random. White mass shooters on the other hand often use rifles and they seem competent in their use. I have done a fair amount of shooting in my life and I can say with a great deal of certainty that at distances much over 25 yards I am going to score a lot more hits with an AR than I am with a 9mm handgun. That is probably true for most shooters. It is often said that the purpose of a handgun is to get you back to your rifle. Whites tend to target their shootings while blacks often commit mass shootings on the spur of the moment.

The other reason is the big one.

In spite of all evidence to the contrary, the media seeks to portray white men as deranged, angry and dangerous. If all you know is what you see from the news, you would think white men are (as LeBron James claims) spending all of their waking hours hunting down and murdering black men. There are people in this country by the millions who think that whites are lynching blacks and that cops are gunning down innocent, unarmed black men on a daily basis. Pointing out to them that this is untrue is usually a waste of time. Faced with inconvenient rhetoric, their circuit breakers pop and they shut down or get enraged like the Psychlos from Battlefield Earth. It doesn't matter to them that blacks are far more likely to shoot white people than the opposite, all that matters is the programming.

Why do they lie about it? Other than some tribal malice toward white people, there is little doubt that the cultural elites in the West are clearly sympathetic to Marxism. This was true for most of the 20th century and continues on today.

Marxism in it's various forms has proven pretty easy to propagate in places like Africa and South America. The people are less sophisticated politically and lack a culture of individual liberty. The obvious problem is that in the global south, Marxism leads to violence and starvation. While the Soviets had their problems, and they were huge problems, they also had a powerful military and a space program. China has managed to turn into a global manufacturing powerhouse in spite of their Communist rule, while still being repressive to their own people.

But in Venezuela, Marxism has led to starvation. In Africa it has helped contribute to the inability of Africans to form economically viable societies. The global Marxist movement has always had their eyes on the big prize, Western Europe and the United States. The problem? The European people and their posterity in America have a stubborn streak and doesn't find totalitarian Marxism appealing. Probably this has to do with culture but also because European people have always been innovative, people who invent and explore, and as such thrive in cultures where freedom and hard work are rewarded. Give most Europeans half a chance and they will build a business, conquer a continent or explore the globe.

Those pesky European people need to be crushed and pushed aside but there are just too many of us and thanks to the foresight of our Founders we have too many guns. The solution? Create the image of white guys as hyper-violent by using carefully crafted stories about mass shootings and keep talking about certain mass shootings while ignoring others.

It is working. Even fairly intelligent white people are convinced that mass shootings are a white guy thing and that the 2nd Amendment is about shooting deer instead of shooting tyrants. Who wants a school getting shot up? Maybe we could use a little more gun control....

Bit by bit, they eat away at our rights.

Mass shootings simply are one more rhetorical trick they use to plant the seeds of our destruction, often in the minds of our family and even our children.

By the way, as of Sunday evening we were at 11 mass shootings. How many did you hear about? Ask why you didn't.
Posted by Arthur Sido at 8:00 AM