Reminder That They Hate You

From former National Security Adviser and U.S. Ambassador to the UN Susan Rice: 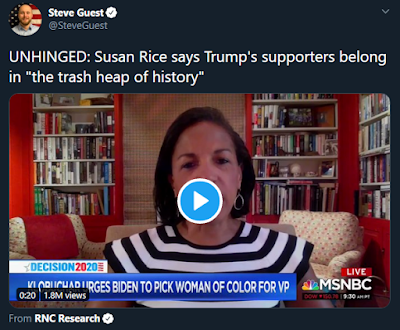 The trash heap you say?

It is impossible to overstate the hatred they have for you. 63 million Americans voted for Trump in 2016. According to Susan Rice these people are trash. Isn't that what you put in a trash heap?

What do you do with trash? Normally you burn it or bury it.

Who are "Trump's supporters"? Middle and working class white people for the most part.

Rice is amping up the hate whitey rhetoric to try to catch the eye of Biden's team as they look for a "woman of color" to choose as his running mate and almost certain replacement within a year of his taking office.

They hate your children.

They hate everything you stand for.

They want you dead.