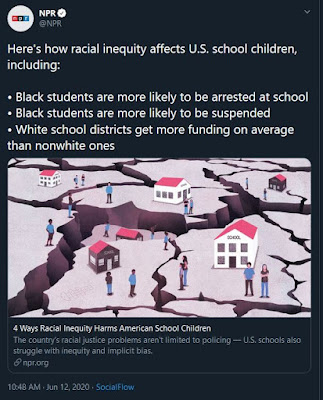 Granted, I already know that NPR is pseudo-intellectual emotional masturbation for liberals. 25 years ago it was still leftist but they had in-depth reporting of issues. Now everything is partisan. I don't listen anymore but my wife occasionally will and she invariably calls me outraged at some obvious leftist propaganda pretending to be news. I always tell her to stop listening but she likes to hear the other side. Sometimes I will turn it on and watch the clock to see how long I can make it before they mention Trump. It is almost never more than a couple of minutes and often is only seconds. Everything is Orange Man Bad, an homage to how wonderful homosexuals are or the now ubiquitous "why white people are mean to black people" pieces.

Still, an actual journalist would dig deeper into the question and ask about all of the potential factors at play. I don't doubt the first two assertions, they are what I would expect. Blacks, especially as teens and young adults, tend to exhibit significantly more anti-social behavior: violent crime, looting, general low level disregard of the law (ex. fare jumping on subways) so it stands to reason that this behavior is both inherent and learned at an early age.

The NPR piece brings up several possible reasons, mostly "implicit bias" and lack of funding. What is never mentioned in the article is the simplest explanation, which is often the right one:

Perhaps black students are suspended and arrested more than white or mestizo students because they commit more, and more serious, infractions?

It isn't even considered. There isn't a hint of responsibility for this problem in the black community. The only possible reasons are external to that community. This is something being done to them and they are helpless to do anything about it. Where I went to high school, in a school district that is around 95% white, kids are suspended for vaping at school. Did NPR look at a sampling of black kids who were suspended/arrested to see why they were suspended/arrested? I very much doubt it and it they did, they aren't mentioning it.

NPR presents these statistics and assumes, and expects their readers to assume, that it is self-evident that the only possible reason black students are suspended and arrested more often is some form of racism. There can't possibly be any other explanation. To believe that we are required to also believe that white and mestizo students are committing the same infractions at rates equivalent to their black peers but that teachers and staff just ignore it. The piece quotes a couple of alleged academics and a study where preschool teachers were shown four children, two black kids, a boy and girl, and two white, a boy and girl, and asked the teacher to watch for "challenging behavior". It was a trick because there supposedly wasn't any "challenging behavior" but allegedly the preschool teachers were looking at the black kids more and especially the little black boy. This is rock solid proof of "implicit bias". No mention of whether the black kids were wearing more colorful clothing or were more active in the videos. Just that preschool teachers looked at the black kids more than the white kids and that is in and of itself proof of "implicit bias".

Even if I concede that the study shows what it purports to show, what does that mean? I sound like a broken record here but real journalism, the sort of "in-depth reporting" NPR likes to brag about, would require more investigation. What were the respective races of the pre-school teachers and did that have an impact on how they viewed the children? Are pre-school teachers more likely to look at the black kids because they are "racist" or is it a learned behavior from experience with actual pre-schoolers that black children are more likely to be acting out? The same is true with cops, do they "harass" young black men because they are "racist" or because experience with actual crime on a daily basis predisposes them to look more closely at young black men? Be honest, are four young black men standing around a stoop, looking furtive, the same threat level as four young white men at the mall? Of course not.

My contention has long been that what is called "racism" is mostly a learned behavior coupled with an inherent survival instinct to prefer people related to you or similar to you. I grew up in a different era and mostly without any contact with non-whites. Along with jokes about wops and polaks, it was common for people to say nigger and make comments that would be considered "antisemitic" today. As I moved through the school system and eventually to college, I received a ton of teaching/indoctrination on not being "racist". Until relatively recently, we tried to live out the rhetorical ideal of the civil rights movement to judge by the content of character rather than the "color of skin". But slowly, over time, patterns kept emerging and the rhetoric toward me and my family for our race became more toxic. Now I say what I think and don't give a shit if someone finds it "racist".

My assumption is that black kids are suspended and arrested more often because they are committing serious infractions deserving of suspension or arrest more often. There is a reason that teacher turnover is so high in urban schools compared to suburban and rural schools. A few years back a news story was running about St. Louis public schools suing 32 teachers for quitting mid-year. The attorney for the teachers responded:

Attorney Emily Perez said the contracts are not enforceable and suing to collect the $3,000 is unfair to the teachers because they faced stressful, toxic and even unsafe work environments.

Other reports surrounding this situation cited one teacher who was punched in the face by a student, and the student didn't face any disciplinary action. These sort of incidents are pretty common and occasionally videos surface.

By the way, St. Louis Public Schools are around 80% black. It seems that many idealistic young white women choose to teach in urban schools only to find out that the reality of a school full of black kids doesn't match up with what they were told in their college education and liberal arts classes.

Meanwhile, as part of the hypocritically named "Black Lives Matter" protests, many activists are demanding that "SROs" or School Resource Officers be removed from schools. SROs are basically police for the school to try to keep a lid on the worst violent behavior. Removing them from schools that are already violent and unsafe will simply accelerate the exodus of teachers and make life a living hell for the students who are trying to learn. Like the "Defund the police" movement, the people who will be hurt the most by removing SROs are black kids.

There is a lot that could be investigated by NPR if they really were interested in learning more about what is going on in these schools but as usual all they do is present surface level fluff, a little dopamine hit for the liberal white readers who can cluck about racism and how awful it is from the safety of their suburban home in a lily white neighborhood. People who listen to NPR don't send their kids to diverse urban schools so they don't really care about fixing the issue.

The real work of journalism today is being carried out by dissidents on the left and mostly the right who face opposition and censorship but still dig deep and go after the truth. The mainstream media, like the education establishment and the entertainment industry, is little more than propaganda engines for the cultural Marxist left.