If White Silence Is Violence....

...then it seems reasonable to respond to people who refuse to parrot back the required talking points with violence.

See how easy that is?

Control the language, control the people. "White silence is violence" is one of those cutesy, nonsensical sayings that most White people dismiss as silly but it most assuredly is not. You see people like this.... 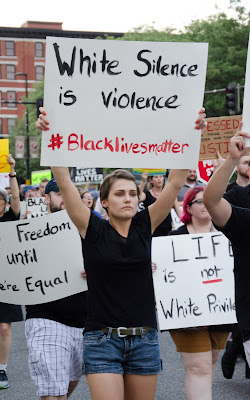 ...carrying around signs and you have to start to realize that our young people have been turned against themselves. All young people resent older generations but this generation of young White people hates their parents, hates their country and hates themselves. The girl in this picture should be happily married and starting a family but instead she probably is either in the middle of or a few years removed from college where she was taught to hate the very people, institutions and civilization that provided her with the cushy life she resents.

The mass media and education system simultaneously teach non-Whites to take pride in the accomplishments of others while marinating in a malevolent stew of racial grievances and at the same time teaches White kids to hate themselves. The girl in that picture probably thinks of herself on a surface level as a "good White", an "ally" but deep down she has to hate herself.

What the use of language like "White silence is violence" is creating is a framework where someone who says something black people don't like is an excuse for violence and even failing to say what the Powers That Be have decreed you must say is an excuse for violence. See, if silence is violence and it is OK to respond to violence with a violent response, then your silence is an attack on me that I am justified in attacking you for. Of course you will note that it is "White silence" that is violence. Not Latino silence or Asian silence or Jewish silence. Just "White silence".

There are already numerous cases of a black person attacking a White person on video and after the video is released we are assured that the White person called the black a nigger or some other racial slur, and that apparently excuses a violent and potentially lethal assault. A recent example involved an employee at Macy's in Genesee County, Michigan which is home to the city of Flint. The county is about 70% White and 20% black but the city of Flint itself is over 53% black. The Macy's is in Flint Township, right on the edge of Flint itself. A video surfaced of a black guy sucker punching a White Macy's employee and then continuing to strike the man while he was down. The White guy clearly has no idea what is going on and the brother of the man assaulting him is filming the whole thing, while giggling. The man filming, a black "rapper" who calls himself "FT Quay", claims that the employee called them niggers and that is what instigated the attack.

He said the encounter started when his brother “got the shirt, just picked it up. He didn’t have it on physically. He just put it over his body. He asked him, ‘Does this shirt look too little?’ And he politely said, ‘Yes,’ and continued back on the phone with the remark, ‘No one, just some n—r (nigger).'”

First off, even if that really happened and it sounds about as believable as two white guys attacking Jussie Smollett, it doesn't excuse a violent assault. The black guy was the aggressor as the White guy never even tried to defend himself and repeatedly hit him while the White guy was on the ground.

Second, there is zero chance of this happening. The White guy sounds very meek and timid in the video and he works in a mall next to Flint. No one who has spent any time in diverse urban settings would call two clearly hostile black men niggers in ear shot and I doubt the White guy has ever called someone a nigger in his life. Almost all White people understand that the word nigger has an almost mystical quality to blacks and that calling a two black guys niggers is going to result in an assault. The man filming defended his brother for the attack with this:

And just, what else were we supposed to do? In this age and time, he didn’t know what else to do. That was just his instinct.”

“I’m behind my brother fully, because with everything else going on, what else can we do at this point?” Quay said. “All the hate and everything is not needed because nothing works. It was spur of the moment. That was his instinct.”

He didn't know what else to do, it was just instinct.

He didn't know what else to do?

The statement is very telling. When confronted with an uncomfortable situation, his only possible response was to act on instinct and attack the guy. He was helpless to exercise any self-control, his basest instincts took over. This wasn't a life or death situation, it was a slightly built White guy with his back to him. Still, his brother claims that he could do nothing but react and react violently.

How is that anything other than repeating exactly what many people claim about blacks, that they lack any sort of impulse control?

Of course the entire story is bullshit. Given the age of the White guy working in a Macy's and his voice in the recording, I would guess there is a pretty significant probability that he is a homosexual (spend some time in a higher end department store and check out the men working there). This looks like some good natured black on White gay bashing and when there was a backlash we got this story about the guy calling him a nigger and the use of the word is supposed to be justification for a violent assault. A lot of homosexuals who have partnered up with other anti-White interest groups are going to find out the hard way that once they stop being useful, they are in for a bad time.

That brings me back to the notion of speech and ideas being "violent". Set aside bogus cases of Macy's employees calling people niggers or White guys attacking a black TV actor at 2 in the morning. At what point does simply discussing, in a calm and rational way, things like crime statistics and racial disparities in the commission of crimes become "violence" that can and should be met with defensive real violence? In truth we are already there.

Normal Americans have lost control over our own language. Violence can now mean speech that makes one uncomfortable. Racism no longer means holding racial animus towards people of another race, now simply being White makes you inherently and unalterably "racist". Controlling the language and redefining words, or even making up completely new words, is a favored tactic of Marxists. Someone insufficiently excited about a violent takeover of their nation by Communists was a "counter-revolutionary" and "enemy of the state". Calling each other comrade, a word implying a level of familiarity and affection, was used to refer to all people, even strangers and people you don't like, and failing to use the term could get one labelled dangerous reactionary.

White people need to understand. Staying silent isn't going to save you. David Deavel wrote an excellent piece for The Imaginative Conservative: No Safety in Silence and in part he wrote:

So do not stay silent. Do not shout. Calmly speak the truth about the issues of the day, whether they be about race or sex or—what I think is the most important one for our present moment—class. You can acknowledge the difficulties in race relations without resorting to strange theories about the evils of “whiteness.” You can accept that there are still problems in modern policing without speaking nonsensically about “defunding the police.” You can have sympathy for the difficulties of those with gender dysphoria without accepting the notion that being a man or a woman is simply a matter of what one feels. You may well lose people you thought were friends. You may find that your mobility is no longer upward as it once was. Your public voice may even be canceled.

The still, small voice of conscience will never be canceled. And the silence that follows acting upon it is truly golden.

Again, your silence in the face of Marxism won't save you because your silence is itself seen as an act of violence. You must choose to either capitulate fully to whatever the Left demands, changing but always assenting no matter how crazy the demands, or you choose the life of the dissident.

There isn't a third option and your choice, either way, will have consequences. Choose wisely.