D-Day 76 Years Later: What If They Knew? 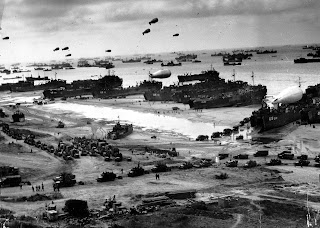 On the 76th anniversary of the D-Day Landings, I cannot imagine what was going through the minds of those young men as they climbed down the ladders into landing craft, rode to the beach and as the gate dropped found themselves deposited in hell on earth. Other young men got into airplanes with parachutes, planning on being dropped into hostile territory with only what they had on their back. Still others would be loaded into rickety gliders, towed across the English channel and cut loose to basically crash land in France. Many of those landing on the beach, jumping out of planes and gliding to the earth died before they even fired the rifle they had trained so long with. Tens of thousands of others would die over the next year until Germany was forced to surrender to the combined might of the Allies and the Soviets.

D-Day for people of my age and older is one of those historical milestones.While Germany and the U.S. had been at war since 1941, it wasn't until 1944 that D-Day finally took place. Sure there had been fighting in North Africa and the invasion of Italy, but that gets little attention. D-Day was the main event, the culmination of years of preparation and remembered in dozens of movies and hundreds of books. 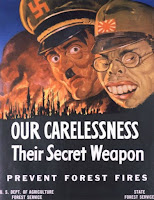 What would it take for so many American young men to volunteer to leave their homes, travel to England and then climb into landing craft facing withering fire from German machine guns? Nothing less than the absolute certainty that the fate of the world depended on them doing so. They believed that if they didn't fight, the world would fall into darkness. The Nazis and the Imperial Japanese were portrayed as monsters in wartime propaganda. Notice the claw-like hands reaching for an American woman and her child, and the exaggerated skull of Hitler and how the Japanese had less than subtle suggestions of huge teeth and simian features. Bugs Bunny cartoons of that era were incredibly "racist".

If we didn't win, the Japs and Krauts would come to America and despoil our women. The theme of Germans and Japanese being after our women was a common one in propaganda. While it was unlikely that either Germany or Japan would have invaded the U.S. mainland, the threat seemed very real to 18 year old men in the 1940s.

Every aspect of American life was consumed by the war effort. Don't change jobs or take a day off, doing so helps the enemy! Carpool with as many people in a vehicle as possible! Buy war bonds! Plant a Victory Garden! Keep your mouth shut, loose lips sink ships!

The hatred of Americans for the Germans and especially the Japanese still burned hot decades after the war. I have mentioned before my kindly old grandma, a staunch Democrat her entire life, still calling Japanese people "little yellow nips" in casual conversation when I was little. People in my home town of Toledo wouldn't buy "Jap" cars.

Add it all up and you can start to see why so many young men volunteered to fight in World War II. They thought the freedom of the world depended on them. The world they thought they fought for would have been great, if it had turned out that way. It didn't.

For a couple of decades, freedom seemed to have won but viewed from June 6 of 2020, it isn't seeming so clear.

Eastern Europe spent nearly half a century under the iron boot of the Soviet Union. No one was happy about that except the top people. People who think they are in a glorious workers paradise don't have to be trapped behind barbed wire and shot if they try to leave.

Tens of millions died in the Soviet Union and those who survived lived in a dystopian nightmare. That nation still hasn't recovered, nor has most of Eastern Europe.

China fell to the Communists resulting in as many as 100 million dead. They are still under the grip of Communism and who knows how many have been killed by the state or imprisoned for decades at a time for speaking out against the state.

Western Europe? The nations of Western Europe have lost even the will to live or reproduce. They all seem to have some lingering survivors guilt. Rampant degeneracy, deep self-loathing and welcoming an invading army with open arms, and in the case of many young European women open legs.

The United States is rotting from within, only a short distance behind Western Europe in degeneracy and in many places equaling or exceeding their self-loathing. Within 75 years of winning World War II, the descendants of the Americans who sacrificed and died in World War II became a minority in their own country.

If you could take those men loaded into the landing craft on a virtual tour of America, with her cities burning and history being vandalized or on a walk through modern Paris full of Africans and Middle Easterners who don't speak French and are violent and ungrateful, what do you suppose they would think.

Would they get out of those landing craft, into the teeth of machine gun fire and risk everything to liberate Europe?

Or would they point their rifles at the guys driving the landing craft and demand they turn those boats around and go back where they came from?

I think we all know the answer.