The somewhat goofy but often entertaining Styxhexenhammer666 put out a good video this morning on the way Black Lives Matter is really just a Democrat slush fund dressed up as a social activist organization....

This video comes on the heels of this news story.....

Minnesota Freedom Fund has only spent $200K to bail out protesters, despite raising more than $30M

Obviously this has upset some street-level "activists" who don't understand how this all works. There aren't that many people in jail and I am willing to concede they have probably bailed out everyone they could related to the riots and it only cost them $200k. It isn't their fault that idiots gave them $30 million dollars to bail out looters and rioters. So what happens to that money? Well I am sure it will be used for all sorts of leftist organizing and agitation, and mostly to pay salaries for people who are avoiding gainful employment.

None of this is new. I have been talking about this for years, specifically about the Southern "Poverty" Law Center, a far-partisan group that rakes in huge amounts of money by scaring white liberals into thinking there are millions of mouth-breathing white supremacists just waiting to lynch some colored folk and send the Jews to camps ( See: Paging George Orwell ). They spend their donations publishing a bogus "hate map" that includes groups with a couple of members and counts the same groups in multiple states, while amassing a hoard of over half a billion dollars. Who knew fighting poverty was so lucrative?

Jesse Jackson and to a lesser extent Al Sharpton have been masters of this hustle for decades. Jackson, born to a 16 year old woman impregnated by her 33 year old adult married neighbor, has never had a real job in his life from what I can tell. He has been an "activist" since his time in college. The "Reverend" Jackson claims Martin Luther King Jr. died in his arms and used his relationship with the famous adulterer as a springboard to becoming wealthy without working. Jackson's hustle is pretty simple, and Styx talks about it a bit in the video. Jackson basically goes to corporations and threatens to cause a ruckus, accusing them of not being sufficiently obsequious about race, and they usually give him a bunch of money to make him go away. Rinse, repeat. He has been doing this for decades, really for as long as I can remember, and it has made him immensely wealthy and influential. It is just cheaper and easier to pay him to go away than to deal with bad press and boycotts. It is the same reason companies just pay off ambulance chasing lawyers, it is cheaper and easier than dealing with endless lawsuits. Paying off race hustlers like Jackson is just a cost of doing business, a cost passed on to the consumers like everything else. A great book on this topic is Ken Timmerman's Shakedown: Exposing The Real Jesse Jackson.

Jackson's con has been adopted by a whole new generation of hustlers all across the country. Every decent sized city has a core group of black "activists" and "ministers" who pop up whenever the news is favorable to demand "action", which translates into "money" in the form of funding they use for "programs" that don't do anything but line their pockets. As I have said over and over, the surest and easiest path to a lucrative future for a moderately intelligent black person is to become some kind of "activist". It doesn't require a long, academically rigorous education, just the ability to figure out how to monetize white guilt. Figure that out and you are looking at a life of not working and driving nice cars. Fake black man Shaun King and homo black activist DeRay Mckesson didn't even have to do the Civil Rights era marches like Jesse Jackson, which carried an element of actual danger. They just adopted the rhetoric and refined it using the new mediums of social media. I was unaware of this but apparently fagtivist Mckesson has been vocal in criticizing Shaun King. Any number of mafia movies should make clear, people won't pay protection money to two different crime syndicates.

That brings me to "Black Lives Matter", perhaps the most shamelessly deceptive name in the history of a movement full of deception. BLM has taken this to a whole new level. Where Jesse Jackson would threaten a company with bad publicity and boycotts, BLM threatens to burn entire cities to the ground. It is extortion, pure and simple, and you better pay them the protection money they demand or else. It is the old mafia trick of demanding protection money from business owners, but on a much larger scale. 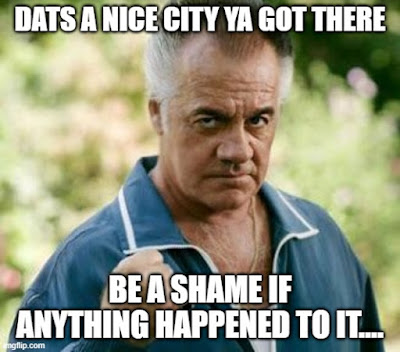 Where do white liberals think the money they give to BLM or other "social justice" groups goes? I suppose they think it goes to help poor blacks pay the rent or buy groceries, but we already do that via housing assistance and food stamps. While you can't actually see what is going on due to a lack of transparency, it is clear most of the money left over after lining the pockets of "activists" is funneled into leftist political action, which means Democrat politicians.

A significant chunk of charitable giving doesn't do a thing for charity. This is true no matter where you look and is more true the bigger a group gets. Most people are shocked to find how much money charitable groups spend on a) staff salaries and perks and b) to raise more funds. A lot of the money you donate goes to pay people to raise more money from people so the organization can pay people to raise more money. That is not to say that these groups don't do any good at all, many of them do all sorts of charitable work but the issue is how much charity do they spend money on versus overhead. Again, that is why I will give money to a local food bank before I give money to a national group "fighting hunger". A local food bank probably spends almost all of their funds on actual food and uses volunteers as staff while a big national organization spends millions on office space, salaries and benefits and of course more fund raising. Most people would be shocked to look at the budgets of big churches, even ones that talk about caring for the poor and mission work. I have been writing about this for many years, most Christian giving goes toward making it comfortable and entertaining for Christians to go to church for an hour once a week.

That is true for tangible things like "fighting hunger" by providing free food but when the goal is more amorphous, like "combating racism"? It makes it far harder to quantify what is going on. How do you combat an attitude with an endlessly changing definition? Obviously you can't. That is by design. Giving money to BLM and other "civil rights" groups is like giving money to third world orphanages. You get that little dopamine hit for being a good person and maybe you can mention it in passing on social media for upvotes and likes but you don't really care if it does anything because the purpose is to make you feel better, not solve any problems.

The people pulling the strings behind BLM understand this. The unspoken contract is that white people give them money and ask no questions. Corporations make a big deal about giving them money with the understanding that the purpose of the donation is to make their mostly white customer base feel better about buying their products/services. No one cares if things get better and in the case of BLM, the last thing they want is better race relations because no one contributes to groups like them when things are going good. Do you think the NRA gets more donations with Trump in office or Obama? Big advocacy groups quietly love it when their cause is under threat. I guarantee the SPLC is raking in cash left and right thanks to Trump being President.

The Black Lives Matter movement is just the latest iteration of the Jesse Jackson hustle, with the added feature of the threat of citywide violence and mayhem. The funds they are raking in won't do anything to protect black lives but they will make a handful of black "activists" quite wealthy and will fund the neo-Marxist movements here and abroad.
Posted by Arthur Sido at 9:48 AM