In my prior post, The Politics Of Mass Shootings, I closed by saying:

By the way, as of Sunday evening we were at 11 mass shootings. How many did you hear about? Ask why you didn't.

I scheduled my post for this morning but after checking in this morning it turns out that from Friday to Sunday there were a total of 14 mass shootings in America, three from Louisiana alone. I decided to check out the Louisiana shootings to see what was going on there.

Not much information on this one, just that one is dead and one is in critical condition in New Orleans. The next comes from Lake Charles, described as one of the most violent cities in the U.S..

A total of four people were shot and police later arrested Nathaniel J. Lede. Someone must have snitched because they grabbed him right away. Here is Nathaniel... 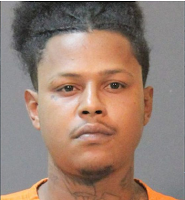 The third shooting was in Lafayette, Louisiana.

Not many details on this one either as of this morning.

In a weekend full of mass shootings, Louisiana managed to tally three.

14 mass shootings. No media attention.
Posted by Arthur Sido at 9:00 AM