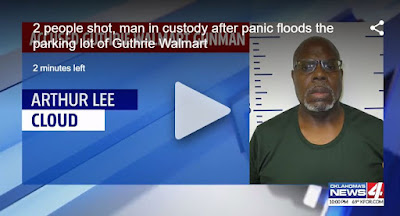 What happened? That is where it gets all kinds of Wal-Mart. Two men got into some kind of verbal altercation in the parking lot of the Wal-Mart in Guthrie, Oklahoma. That is when things went sideways....

Investigators say a male victim was shot just feet from the front door. Police believe Arthur Lee Cloud was the one who pulled the trigger.

Cloud yelled at a woman in his passenger seat to hand him his gun, but the gun went off.

The bullet struck the woman, who is believed to be Cloud’s wife, in the stomach.

“He got mad about that, so then he was like, ‘Okay, I am going to kill you because you made me shoot my wife,'” a witness named Herbet said. “He shot him once, then he got over him and shot him a couple more times.”

The obvious response to accidentally shooting your wife in the stomach is to get pissed and shoot someone else. Someone should tell Arthur Lee Cloud to not put your finger on the trigger when someone is handing you a gun. From the initial story, it sounds like his wife was in far worse shape than the guy he intended to shoot. You are quite the marksman Mr. Cloud! Mr. Cloud is 61 years old and also a felon who somehow still has a gun in his possession. While I am a 2nd Amendment absolutist, in Mr. Cloud's case it seems prudent that he should probably not have a firearm.

A 61 year old man acting like a young punk, shooting his own wife accidentally and then, instead of rushing her to the hospital after he shot her in the stomach, still takes the time to shoot the guy he was arguing with and then walked over and shot at him again.

At least he has his priorities straight.
Posted by Arthur Sido at 7:30 AM