The Libertarian Party recently held some sort of virtual national convention and nominated Jo Jorgensen to be their candidate in 2020. Jo styles herself on her webpage as "Dr. Jo Jorgensen" (she has a Ph.D. in Industrial/Organizational Psychology), an affectation I always find pretentious in academics outside of the university setting and one that seems especially common among women.

On many of the issues, she has decent positions. Unlike someone like Bill Weld, the first mannequin to run for Vice-President, Jorgensen has been a libertarian since before I could vote and her position on most issues reflects current libertarian thought. Unfortunately that means that she holds the one position that will make sure that a libertarian form of government never actually happens...

Repealing "arbitrary quotas" on the number of people crossing our borders is suicide for libertarianism. I have covered this at length in other posts, most specifically Open Border Libertarianism Is Self-Defeating but here is the gist of it. The people who would come here if the borders were open would almost universally be opposed to every position Jo claims to champion, from gun rights to a smaller Federal government, other than freeing "persons convicted of non-violent victimless crimes". Our migrants today are not Irish or German. They are mestizo, Asian and African and those groups consistently and overwhelmingly vote for bigger government, against gun rights, for higher taxes on the productive class and less liberty for all of us.

The typical response from libertarians is to argue that just because people live here, it doesn't mean they get to vote but unless we eliminate birthright citizenship the net result is a massive influx of people who are reliably going to vote for far left positions and against liberty.

In fairness to Jo, I do understand the libertarian argument, in theory, for open borders and the free and unrestricted movement of people. The problem is that, as with virtually all standard libertarian positions, when you deal in reality instead of theory, the whole thing falls apart and is exposed as a farce. In a perfect world full of people who share common values and culture and who can always be counted on to act rationally, libertarianism might work. In a very small, ethnically homogeneous nation it might work. In a country with 350,000,000 people who are divided into several large, competing tribes? No way. In other words, her position on de facto open borders is ideologically consistent with her world view, just practically impossible. So I can sort of respect that while at the same time utterly rejecting it.

She seems nice enough, kind of has a matronly, "Tammy From HR" look about her. She speaks passably well but isn't terribly charismatic. She probably would have done well enough to get a Gary Johnson level of support, somewhere around a couple million votes. Not enough to win of course, that isn't on anyone's radar, but maybe enough to make a little splash and siphon enough votes from Trump to give Biden the win via states like Pennsylvania and Wisconsin. I reject the idea that the libertarian would pull from Biden, people familiar enough with most libertarian thought are far more aligned with the GOP than the Democrats. But then I saw who was going to be her running mate.....

The Libertarian Party nominates their Vice-Presidential candidates separately and directly, unlike the two major parties where it is mostly a selection by the Presidential candidate. Apparently Jo Jorgensen favored John Monds as her running mate. Monds is from Georgia and is one of the very rare black libertarians. He seems pretty solid on his credentials. His wife is a professor and he has been homeschooling their four children, so he looks like a decent, hard working fellow and a ticket of a woman and a black man would maybe attract some attention. Unfortunately the delegates had other ideas and nominated this guy..... 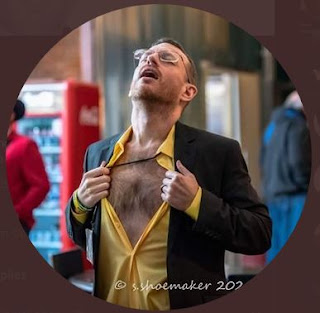 His name is Jeremy Cohen but he calls himself Spike Cohen and his social media presence is a pages long cringe-fest, the ramblings of a dumb ass who desperately wants to be seen as edgy and hilarious but comes across as just flat out stupid. He was partnered up with crackpot Vermin Supreme, a man known for wearing a rubber boot on his head and a platform including the promise of a free pony, and this is what he has on his VP section.

Spike Cohen was born Jeremy Cohen at an extremely young age in 1982.  At the age of 3, Jeremy went to the theater with his family to watch the My Little Pony movie.  After witnessing the heroism and bravery of Spike the purple dragon, he informed his family that Jeremy was in fact dead, and he was now Spike.  This bit of information proved to be a strong indicator of how Spike would conduct himself for the rest of his life.

That is comedic gold right there. When you have to try that hard to be funny, it is a sure sign that you are terribly unfunny. His entry on Wikipedia makes a big deal out of him being Jewish and a former(?) frequent drug user.

In a Presidential race featuring a billionaire former reality TV star alongside Mike Pence, a demented old creepy dude and whichever wahman of colour he chooses to be his running mater, Jeremy/Spike Cohen is the least serious one of the bunch. Facing a collapsing economy, a fiscal disaster on the horizon and rising tribalism, Jo Jorgensen could have made the case as the serious candidate in the race but not with this cringe clown as her running mate. It is not her fault, this is the hand she was dealt. I am sure behind closed doors she is beating her head on a desk, now that she finally becomes the nominee and had the chance to have a serious ticket, she is instead condemned to be a laughing stock thanks to this dipshit as her running mate.

Whatever chance the Libertarian Party had of being taken seriously was dashed when the delegates decided to, for whatever reason, nominate Spike Cohen as their VP candidate. There are plenty of serious people, like John Monds and Austin Petersen but they choose a guy like that? How could any semi-serious adult, recognizing the state of the world and our country in particular, cast a vote in good conscience for that tool?

The libertarian moment in America came and went, first with the platform of pothead Gary Johnson and weirdo Bill Weld and finally with the nomination of a man who lacks sufficient seriousness to be a cashier at a pot shop.

The future will be in the hands of economic populists and nationalists. Sadly it is probably already too late.