In a sports league that depends on revenue from a mostly white audience, already reeling from declining attendance thanks to a mediocre QB leading a campaign to kneel during the national anthem and facing the possibility of a shortened or even cancelled season as a result of the Chinese coronavirus, one would think they would try to avoid doing anything stupid that would endanger their $15+ billion in revenue. You would be wrong.

The National Football League is mulling the implementation of a new policy to encourage teams to hire a black head coach or general manager, by offering  to boost the draft position of a team that makes such a hire.

The league took criticism this year when a black candidate was hired for only one of five head coaching jobs that had recently come open. Several months ago, NFL Commissioner Roger Goodell acknowledged that the league wanted to encourage teams to hire black coaches, and now it looks like moves are being made to facilitate that plan.

If you aren't familiar with sportsball, in the major American sports leagues the draft to choose new players is ranked by your performance in the prior season. For example, in the NFL it is a pretty straightforward process. The team with the worst record picks first, the team with the best record picks last. The NBA is slightly different, the ranking includes a "lottery" where teams who miss the playoffs get placed in a lottery to determine the top four draft picks, and the worse your record the more chances you have to get the top pick. This has resulted in occasional circumstances where the team with the best record that didn't make the playoffs got the first pick, adding some spice to the process. It also helps to discourage teams that aren't going to make the playoffs from tanking the season to guarantee they get the number one pick.

The reasoning behind this is supposed to be parity. The worse your team is in the prior season, the better your position to draft new players. In theory you get better players with higher draft choices so the goal is to help bad teams to get better to make the sports leagues more competitive. It is a complex system, you can trade away higher draft picks for experienced players, exchanging a potential young star for a proven commodity. The major sports league drafts are the source of endless analysis and planning.

The rule change being proposed isn't all that drastic, at least not right now.

If a team hires a minority head coach, that team, in the Draft preceding the coach’s second season, would move up six spots from where it is slotted to pick in the third round. A team would jump ten spots under the same scenario for hiring a person of color as its primary football executive, a position more commonly known as general manager.

In the NFL, the third round still has some quality players but not like the first two rounds, although in fairness most of the draft is a crap shoot because the NFL is not the same as NCAA football. The history of the league is littered with players who were great in college, even winning the Heisman, who couldn't hack it in the NFL, often undersized players with a lot of heart or the running QB who could outrun defenders in college but not in the NFL.

Still, think about what this says and keep in mind that before the pandemic, the NFL was charging toward $25,000,000,000 in annual revenue. Being a winning team means a lot more revenue. The NFL is also already one of the most politically correct, cucked sports leagues around. So if you can be a successful coach and are also black, every team in the NFL is going to trip over themselves to hire you.

The fact that the league is talking about bribing NFL teams with a better draft pick in order to encourage them to hire a "person of color" as their head coach or general manager says a lot about what the league really thinks of black coaches. It thinks that they can't make it on their own merit and need to come along with an incentive to get hired.

If this is implemented it will mean that every black head coach and general manager will always be accompanied by the taint of people wondering if they were hired on merit or just to put a black face under the headset on the sidelines. Especially if he doesn't win, fans are going to wonder if their team sucks because the owners picked a token black guy to be the head coach. It certainly has the potential to backfire with black coaches being resented because they were hired just because they are black.

On the other hand, I don't think many teams will do this.

Second, the NFL is a coaches league. Bill Belichick is one of the winningest coaches in the NFL, with a record at the Patriots of 237-83, winning around 3/4 of his games, and far more importantly has six Super Bowl wins. Sure he had Tom Brady but the rest of the team is typically lacking in any big name players. Brady was picked in the 6th round by the Patriots and was barely starting for Michigan but under Belichick he flourished and is widely considered the best QB in NFL history. When you narrow the player field down to 32 teams, the talent level is far more uniform and with the game as complex as it is, your coach makes or breaks the team. Barry Sanders was the greatest running back to ever play in the NFL but his coach was terrible and so was his supporting cast.

Hiring a head coach just because he is black is foolhardy and teams won't do it, not for a slightly better 3rd round draft pick. A coach has to be able to hack it or not in the extremely high pressure world of the NFL. 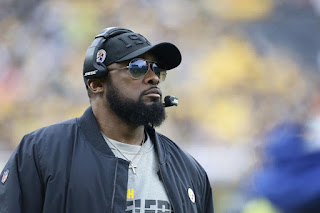 Ultimately teams will hire head coaches who win. Period. Someone like Mike Tomlin, the black head coach of the Pittsburgh Steelers with a record of 133 wins and 74 losses, is going to get hired to coach because he wins. Winning means millions of additional revenue for a team.

Unless the NFL takes even more drastic steps, like assigning draft order based on how "diverse" a coaching staff is, teams will keep picking coaches who win rather than coaches who check the right boxes on a "diversity" checklist.

As is so often the case, the implication here is quite clear: black coaches cannot succeed in the NFL on their own merit and so teams must be bribed to hire them. It won't be long until bribery is replaced with extortion and teams will be punished by losing draft picks if they lack sufficient "diversity" in their coaching ranks.

Higher draft picks are awarded to teams who lose a lot. What does it say when the "reward" for hiring a black head coach is the same as the reward for losing a lot of games?
Posted by Arthur Sido at 11:09 AM