The Danger Of Crying Wolf

Most of us know the story of the boy who cried wolf and the lesson it carries, a lesson that is as valid today as it ever was. "Crying wolf" is sounding the alarm over something that didn't happen and doing this over and over leads to people ignoring you when you have a legitimate concern.

When you constantly cry wolf, people soon stop paying attention. This has happened with the endless complaints of "unjust" police shootings of black men. While there certainly are unjustified shootings of black men by police, the vast majority are legitimate shootings. If you shoot at a cop, or come at a cop with a knife or point a gun at a cop, you are going to get shot. Period. (The same is true of attacking an armed citizen.) Treating those legitimate shootings as if they are cops "gunning down" black men means that most normal people stop listening. It just become background noise. Yet we still have black community activists and clergy acting as if every shooting of a black man is tantamount to shooting an unarmed black guy just strolling down the street. When an actual unjust shooting happens, it doesn't get the attention it deserves because most people are just overloaded on the outrage.

This case is a perfect example. The Louisville Metro Police Department executed a "no-knock" raid on the home of Kenneth Walker, who was home sleeping with his girlfriend Breonna Taylor. The police went into his house well after midnight on March 13th, a Friday morning. Like most normal people, they were asleep at that hour. While police say they announced themselves, several neighbors dispute this. In this case the cops were not wearing body cameras:

The Criminal Interdiction Division, which investigates "violent street gangs, armed career criminals as well as criminal enterprises involving gang members," is not issued body-worn cameras, and so LMPD does not have video footage of the incident.

Imagine this scenario. You are sound asleep in your home. You are a registered gun owner so you obviously aren't a criminal. Someone tries breaking into your home, so you call 911 and get your firearm to defend yourself. You see armed men in the dark with no way to identify that they are cops, and fearing for your life you shoot at them, hitting one in the leg. They return fire and strike your girlfriend 8 times, even though she wasn't shooting at the cops. Nice fire control fellas. Then you get arrested.

Just because someone is a cop, it doesn't mean they can kick down your door under dubious pretenses without clearly announcing themselves. There are a number of incidents where criminals claimed to be cops and kicked down a door, and then proceeded to rob the inhabitants. Someone yelling "Police!", and that didn't even happen in this case, is not sufficient reason to not protect yourself.

The practice of middle of the night no-knock raids has exploded along with the use of SWAT and other special tactics teams like the "Criminal Interdiction Unit". These sorts of raids significantly increase the chance of someone getting shot. If you kick in my door in the middle of the night when it is pitch black and I can't see you, you better believe I will be prepared to defend myself.

This should be an opportunity for a serious discussion of the use of no-knock raids when alternatives exist. Unfortunately the same people who constantly cry wolf are now trying to conflate this shooting with another high profile case. Brian Crump is an attoney apparently representing the family of Breonna Taylor and/or Kenneth Walker. I am not sure which but he is involved as a more or less official spokesperson quoted extensively in the Reason article I linked above. This is what he has on his Twitter page: 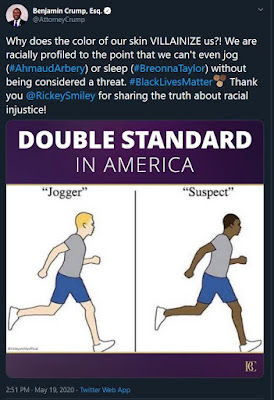 That is incredibly unhelpful and counter-productive. By conflating one shooting by police that seems completely without justification with the shooting of a career criminal, fleeing from a construction site where he was trespassing before he attacked an armed man, it makes the death of Breonna Taylor into just another race hustle by a lawyer looking for an easy payday from a civil rights suit. Breonna Taylor deserves better than to be a pawn for Benjamin Crump to get paid. No one with half a brain is buying the "he wuz jus' joggin'" narrative but Crump dishonestly keeps repeating it, which in turn cast doubts on the sincerity of the story of Breonna Taylor.

U.S. Senator from Kentucky Rand Paul came out and declared that no-knock raids should be forbidden. Senator Paul is widely respected among people across the political spectrum, except for warmongering neocons and the far left who are eager for political violence. The killing of Breonna Taylor should be an opportunity for a bi-partisan conversation about a flawed and dangerous practice. Instead it is just another incident in the clamor of "Black Lives Matter" activists chasing a payday. I doubt Benjamin Crump cares about Breonna Taylor getting murdered but he does care about a hefty settlement check of which he will get the lion's share.

The greatest impediment to seeing justice and real change in the black community are not "white supremacists" or "systemic racism" or "police brutality". Their greatest impediment are the hustlers and grifters monetizing the misery in their own community.
Posted by Arthur Sido at 9:06 AM