The Contrast Couldn't Be More Stark

We just watched the launch of the SpaceX rocket, a collaboration between a private firm and NASA to launch a manned mission from U.S. soil for the first time since the end of the space shuttle program almost a decade ago in 2011.

It was a significant milestone for America and for Elon Musk's company to launch humans into space is a pretty big deal. Never before has a private company launched a rocket carrying humans and perhaps this is the beginning of a new era in space travel.

Shortly before the launch, as I was driving in my car the emergency broadcast system went off. I have heard those warning tones my entire life as every radio station does a test on a regular basis. As a kid it was every week and included some version of "This is a test. This is only a test.". I don't think I have ever heard the tones followed by anything other than "this is only a test". Until today.

Although we aren't that close to Columbus, today the emergency broadcast system was warning civilians to stay out of downtown Columbus, Ohio thanks to the rioters who are looting and burning for "justice", even though the cops have been fired and the one kneeling on George Floyd's neck has been charged and arrested. It clearly is no longer about "justice" and really never was.

I lived through the Cold War and the looming threat of nuclear war and never heard an emergency broadcast followed by an actual emergency but here we are with citizens of the United States being warned to stay out of the capital of Ohio.

Contrast the image of SpaceX launching men into orbit, a scientific achievement that builds on more than half a century of our finest minds working together with this image.... 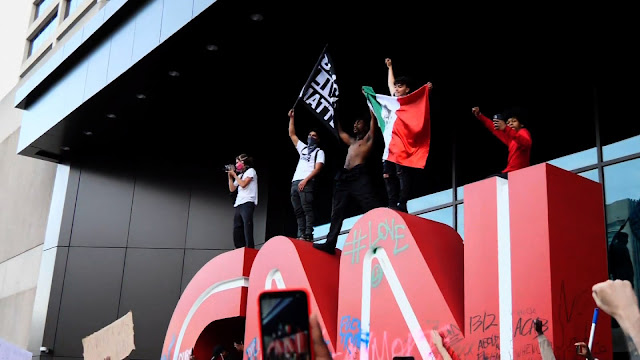 People who have built nothing, invented nothing, created nothing burning and looting. People allegedly "protesting" the death of a black man in Minneapolis by waving a Mexican flag from the CNN building?

This stark dichotomy brings to mind a prior post The Dumbing Down Of America. As a kid I expected the future to be more advanced, more peaceful as mankind marched inexorably toward a brighter future. What we got instead is a nation slowly descending into chaos. This isn't the same nation that sent men into space and to the moon because we don't have the same people. A choice was made without our knowledge or consent to enact a wholesale change in the American people and it has left us with a nation careening toward the cliff. As I wrote in part:

You can have a technologically advanced nation.

You can have a pluralistic nation made up of competing ethnic and racial groups that subsidizes and rewards irresponsibility.

But you can't have both.

What we are seeing on the news today is the reaping of the harvest planted in the 1960s when the decision was made to abandon being the shining beacon of hope for the world in favor of pushing for a multicultural nation that would be easier for a small cabal of technocrats to rule.

Our future is not SpaceX. Our future is burning cities, looting of liquor stores and the gradual collapse of the rule of law.

It didn't have to be this way but we need to recognize who made this happen, who diverted America from her once glorious future in favor of Autozone stores on fire.

There needs to be a reckoning.
Posted by Arthur Sido at 4:59 PM