Last week I wrote about The Danger Of Crying Wolf. Today we are seeing another example of this playing out.

A black man in Minnesota, George Floyd, was placed under arrest by Minneapolis police. On video it appears that a white police officer is kneeling on the man's neck (I haven't watched the video and don't plan to) for several minutes. The man pleads with the officers, saying he can't breathe. At some point he stops moving but the cop keeps his knee on the man's neck until paramedics arrive. The man ended up dying. Like I said, I didn't watch the video and I have no interest in watching someone slowly being killed on camera. People who I respect have watched it and I have enough testimony to know that there isn't a lot of gray area here. The guy was basically throttled to death.

Was Floyd a criminal? Sounds like it, both from this incident and before. Was he resisting arrest? Probably. Was he drunk and/or high at the time? Maybe. That doesn't change the fact that he was handcuffed and on the pavement with a man's knee on his neck. This has all the appearance of an actual case of police brutality.

The response has been reasonably swift. The incident happened on Monday and by Tuesday four Minneapolis cops were fired. The FBI is being called in to investigate. I would be surprised if at least one of the officers, the guy kneeling on George Floyd's neck, was not indicted on criminal charges.

This is the way it is supposed to work. Something awful happened, the cops were summarily fired (not easy for government union employees), the Feds are investigating and charges are likely forthcoming. Isn't the mantra "No justice, no peace"? We seem to be getting justice, the cops were fired and the justice system will now almost certainly indict them. Are we getting "peace"?

There were violent clashes last night in Minneapolis, including the rather predictable throwing of rocks and bricks, and looting, with the police forced to respond with tear gas. There was damage to police vehicles which is going to bring a forceful response. 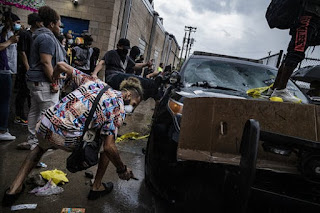 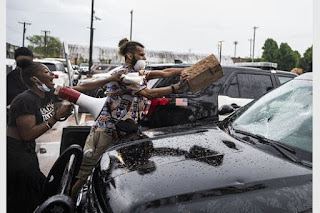 Whoever that guy is, he should be easy to identify and arrest.

Meanwhile, the reason the cops got involved in the first place was in response to a call from an employee at a store called Cup Foods where George Floyd was allegedly trying to pass a counterfeit $20. According to the story from the Star Tribune, this has led to the store owner getting death threats.

Cup Foods’ owner, Mike Abumayyaleh, later confirmed that one of his employees had followed store policy by calling police after someone, thought to be Floyd, tried to pay with a counterfeit $20 bill. Abumayyaleh said he’s been receiving death threats since then.

That is the proper policy for someone who is trying to use counterfeit bills. Paying with a counterfeit bill is theft, just as if you stuffed merchandise into a bag and ran from the store. I am guessing a man with the last name of Abumayyaleh is not a white guy and is probably just a business owner trying to make a living and often dealing with crooked people. Because his employee called the cops, something any reasonable person would do, he is getting death threats. Where is the justice and peace for him? Does "justice" mean you let people rip you off, because if it does he will close up his store and then people in that neighborhood will have one less place to buy groceries.

Again, this seems like a pretty blatant case of police brutality but it is already getting lost under the deluge of people rioting and looting, race hustling lawyers like Benjamin Crump sniffing around for a payday and the simple fact that we get the same reaction from the "Black Lives Matter" whenever a black man is killed in a conflict with police, which happens far more than it should thanks in large measure to black men regularly committing crimes far out of proportion to their population.

There are cases of police brutality, lots of them. Many of those cases happen in the black community, partly for the reason that blacks tend to have criminal interactions with the police far more often and they also seem to be less inclined than whites to cooperate peacefully with law enforcement. There is very likely a racial component in some cases, just as there are racial components in many of the violent crimes committed by blacks toward white people.

Cops are people. People come in all kinds, most are average, some are great and others are awful. Not everyone who goes into law enforcement does so with the same motivation, just like in every other profession.

Most people go into youth ministry and teaching because they love children and see it as a way to help them become better people but of course some people go into those fields because it gives them intimate access to young kids.

Most people take jobs at places like the DMV because it pays relatively well and has good benefits, but some people go into those jobs because they are miserable and being a petty functionary affords them the opportunity to make other people miserable.

Did the officer kneeling on George Floyd's neck become a cop to hurt people? Is he someone who went into law enforcement for the noblest of reasons but slowly lose any compassion after years of seeing the worst of humanity day in and day out? I don't know. I do know he should at the minimum be considered for criminal prosecution and he shouldn't ever be a cop again but apparently for the "No justice, no peace" crowd, he should be summarily executed without trial because the video made them angry.

Incidents like this one should cause outrage, but not outrage that leads to rioting and looting, but the real outrage should be reserved for real outrageous situations. If you chant "no justice, no peace" when cops shoot a man who is shooting at them, it cheapens the slogan and numbs all of us when real outrages happen.
Posted by Arthur Sido at 8:52 AM