Another Ahmaud Arbery related news item I saw yesterday and it is adding more credence to my theory that the powers that be are determined to make an example of Travis and Gregory McMichael, no matter what.

In 1954, the United State Supreme Court handed down the decision known as Brown v Board Of Education of Topeka. It is considered one of the most significant decisions ever to come from the SCOTUS and a landmark decision in the civil rights movement. It overturned the prior decision of Plessy v. Ferguson in 1896 that declared that it was Constitutional for schools and other public facilities to be segregated as long as they were "separate but equal". The Brown decision declared that "separate but equal" was inherently unequal and therefore unconstitutional. One can argue the merits of the case and the practical ramifications of the decision but it is the law of the land. It is now considered an inviolable legal principles that everyone, regardless of race, should have the the same accomodations from the public sector.

Of course that isn't true. Some people are given preferential treatment in receiving government contracts or admission to colleges and universities that receive public funding. That sort of injustice is just one of the fun insults we deal with on a daily basis in America.

One of the key foundations of the criminal justice system is that an accused is guaranteed a jury trial decided by a jury of his peers. That usually means in a criminal case that the jury pool is drawn from people in your own county. I am not going to sit on a jury for a crime committed in Arizona or even for a crime committed a mile south of me across the county line. When Gregory and Travis McMichael go to trial, assuming they do, they will face a jury selected from their peers in Glynn County, Georgia. Glynn County is around 65% white and 26% black so you would assume a jury with around 3-4 blacks, 7-9 whites and a possible Hispanic or Asian in the mix. In other words a jury that reflects the community. Of course there are ways to manipulate the jury by challenging people who are chosen to sit on the jury and usually juries are supposed to be made up of people without preconceptions of the case, which will be hard to do.

However we don't live in a just and reasonable world. We live in a world where prosecution can be decided based on the volume of social media outrage. As the video evidence mounts, supporting the contention that Ahmaud Arbery was illegally trespassing on more than one occasion in a house under construction and that he was fleeing when someone noticed him, at the same time undermining the idea that he was just innocently jogging along when a couple of rednecks gunned him down, the case against the McMichael's seems pretty shaky. So the powers that be decided to put their thumb on the scales of justice. 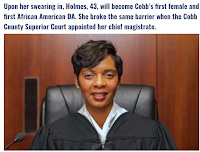 Georgia’s attorney general appointed a black district attorney Monday to take over the case of a white father and son charged with killing a black man, making her the third outside prosecutor in a slaying that’s prompted a national outcry over suspicions that race played a role in delaying arrests.

Ahmaud Arbery, 25, was fatally shot Feb. 23 by the men who told police they chased him because they believed he matched the appearance of a burglary suspect caught on surveillance video. Gregory McMichael and his son, Travis McMichael, were arrested last week, more than two months later, after video of the shooting appeared online and provoked outrage. Federal prosecutors are also considering hate crimes charges, the Justice Department said; that would allow for a separate case in federal court.

Cobb County District Attorney Joyette M. Holmes takes over the case from prosecutor Tom Durden, who the state’s attorney general said asked to be replaced by a prosecutor with a large staff as “this case has grown in size and magnitude.” Holmes is based in metro Atlanta, more than 300 miles (480 kilometers) from the coastal Georgia community in Glynn County where the shooting happened.

There is a lot going on here. We have a politically ambitious district attorney from Atlanta. She is over 300 miles away in an urban district but is being called upon to prosecute a racially charged case in a district world's apart from her own. Glynn County has a population of around 80,000 people. Cobb County has a population of over 730,000 people or nearly ten times larger. The expense involved in bringing her on board will be enormous.

The implication here is obvious. Because this is a racially charged shooting thanks to intense media attention, involving a rare instance of a white man shooting a black man, the Republican attorney general of Georgia, painfully aware of the shifting demographics of his state, decides that this case needs a black D.A. so he selects someone from 300 miles away. Here is a map of the counties in Georgia with Glynn and Cobb circled. 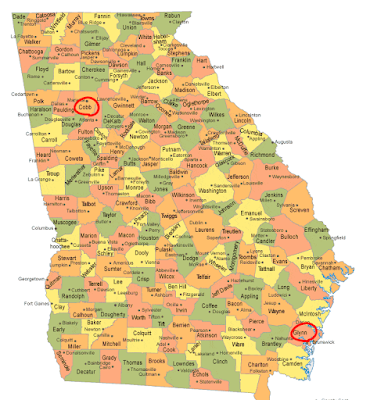 In a straight line from Glynn to Cobb, there are at least a dozen counties along the way. In total there are 159 counties in Georgia. If one wanted a D.A. without a connection to Glynn County and Gregory McMichael, there are plenty to choose from in the surrounding counties. But instead they chose a black woman from 300 miles away. Why?

The answer is pretty clear. By choosing a black D.A. the implication is that only a black D.A. can be trusted to aggressively prosecute this case. A black female D.A. in Atlanta who is politically ambitious can also be counted on to prosecute the case regardless of the merit. Georgia has over 100 white district attorneys that apparently can't be trusted to prosecute this case. It is interesting to note that D.A. Holmes replaced Vic Reynolds as Cobb County D.A. and Mr. Reynolds left that post to become the new director of the Georgia Bureau Of Investigation, the same organization that stepped in and rushed to charge Gregory and Travis McMichael after the social media explosion. Curious indeed.

Can you imagine if a Republican Attorney General insisted on appointing a white D.A. from 300 miles away to prosecute a case in Atlanta involving a black man killing a white person? The streets would erupt in protest.

Also note that the Republican Attorney General has already requested the Federal Department of Justice look into the possibility of pursuing "hate crime" charges against the McMichaels. Even if they are acquitted in the killing of Ahmaud Arbery, the Feds are preparing to go after them on Federal "hate crime" charges, a clear case of double jeopardy but that apparently no longer matters. The powers have decided that in order to prevent rioting, the McMichaels are to be served up as sacrifices just like James Fields, a man who got life plus over 400 years for running into a crowd in a panic while his car was being attacked, leading to a morbidly obese woman having a heart attack and dying. The powers that be have decreed that the McMichaels did something wrong and must be punished one way or the other.

We are rapidly approaching a place where separate but equal is re-enshrined in the legal system, where crimes by blacks against whites have one standard for justice but the rare crime of white on black has a different standard. A nation with a separate legal system for blacks and mestizos versus the system for whites is a recipe for unrest and injustice.
Posted by Arthur Sido at 10:21 AM