In the space of about a week, two events hit the news cycle and received very different responses.

The first was the sudden explosion of attention on the case of Ahmaud Arbery. The initial reports were full of talk of an innocent jogger, just minding his own business, when a couple of redneck white supremacists gunned him down for absolutely no reason whatsoever. The narrative is unraveling like a cheap sweater but that is what we were told and are still stubbornly being told by the media.

The case has attracted intense coverage and commentary from both major party candidates for President, Trump and Biden. The Republican Attorney General of Georgia appointed a black DA to prosecute the case, a DA based over 300 miles away from the county where the incident took place. Every national news outlet has devoted multiple stories covering the incident, all with smiling pictures of Arbery and mugshots of his white accused killers. To say the media coverage and endless analysis has been intense and over the top would be an understatement. The tsunami really started late Wednesday evening, took on a life of its own on Thursday and by Friday the Georgia Bureau of Investigation arrested Gregory and Travis McMichael, all stemming from a shooting that happened months earlier. Now social media and news sites are plastered with warm, cheerful pictures of Ahmaud Arbery (never his glowering mugshot).

The second case didn't get nearly as much attention. Last Friday, an elderly couple was visiting the grave of their son in Bear, Delaware at the Delaware Veterans Memorial Cemetery. A black man, identified as Sheldon Francis, apparently waiting around in his car, shot both of them before running into the woods where he later died in a shoot-out with the cops, although we are not sure if the cops shot him or if he shot himself. The couple he shot were 85 and 86 years old, about to celebrate their 62nd anniversary. The wife died on the scene and the husband succumbed to his injuries the next day.

We had the identity of the shooter relatively quickly but the Delaware State police held the identification of the elderly couple until Monday. They were identified only as an elderly couple of Elkton, Maryland for days until their names were finally released four days later: Paul and Lidia Marino. Marino is an Italian surname and their hometown of Elkton is a small city in the northeast corner of Maryland, in-between Baltimore and Philadelphia. As of 2000, it was over 85% white. So it is pretty obvious that the couple that was killed were white. As for Sheldon, his picture from what appears to be a prior mugshot was also released. 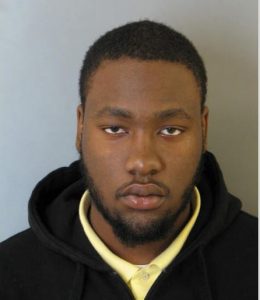 He has the same vacant expression and dead eyes we see in so many violent criminals. His social media presence has been completely scrubbed but some outlets are suggesting that he was upset about the Arbery shooting and that his assassination of the Marino's was racially motivated. We will likely never know because he is dead and so are they. I doubt we will get much of an investigation either, this old couple will get buried and forgotten by everyone but their family.

If you are a reasonable and thoughtful person, it might seem to you that a questionable shooting involving a black man who was fleeing after trespassing on private property before being pursued by armed white neighbors, a black man who went straight at an armed white man and attacked him immediately prior to getting shot would be less newsworthy than a black man lying in wait at a veteran's cemetery before coldly assassinating two 80+ year old white people while they were at their son's graveside, an act of cold blooded murder with absolutely no room for context or nuance.

You would be wrong.

I have searched in vain for a picture of Paul or Lidia Marino. That doesn't mean they aren't out there but I can't find a picture of them as of this morning, not on Google or DuckDuckGo. Pictures of Ahmaud Arbery? Lots of them. Pictures of Travis and Gregory McMichael? Lots of those, mostly their mugshots. Even the same picture of Sheldon Francis. But his victims, two old white people? Can't find a single one.

The news media is completely disinterested in the murder of the Marino's. Look at the search results for "Arbery" on CNN and "conservative" Fox News:

There are stories a-plenty on Ahmaud Arbery. For Lidia Marino (I used her full name to weed out results for former Miami Dolphin Dan Marino)? Not so much.

Not even a single mention. Not one damn mention of a white woman assassinated in cold blood by a black man at her son's grave.

Even her killer barely warrants mention.

One result on Fox News, and of the six hits for "Sheldon Francis" on CNN, he was not the lead in any of them.

It is pretty obvious:

No one powerful cares about a black man assassinating two elderly white people in cold blood for no reason other than apparent racial animus.

But a black career criminal shot during the course of a struggle with a white guy?

Headline news for days and days. Endless analysis. Tons of questions about what is wrong with white people. Complete and utter disregard for the fact that blacks commit far more crimes against whites, especially violent crimes, than the opposite.

Whites shoot black people so rarely that any occurrence is newsworthy.

Ahamaud Arbery will be enshrined in the rollcall of black "martyrs" alongside Trayvon Martin and Michael Brown. Travis and Gregory McMichael will become part of the rogues gallery of evil white people next to Dylann Roof and James Fields, regardless of how their trial turns out.

Two elderly white people who minded their own business and probably were solid citizens for over 8 decades?

No one gives a shit about them and their names don't even warrant a mention from the media.

There is an important lesson to be learned here for those with the courage to notice it.
Posted by Arthur Sido at 11:11 AM