The critical phrasing in our legal system is guilty beyond a reasonable doubt.

This is important because it places the burden overwhelmingly on the prosecution. You don't convict someone because he might be guilty or even that he probably is guilty. You must be certain, beyond a reasonable doubt, that he is guilty in order to declare him so in a trial. That is why defense strategy so often focuses on little mistakes, missteps by the police, gaps or contradictions in the story, to create that reasonable doubt in the minds of jurors. This system is intentionally skewed toward the defense, and when it was adopted it was likely understood that it would mean that the burden was on the prosecution.

That will be the defense strategy in the shooting death of Ahmaud Arbery. Create a reasonable doubt in the minds of jurors and it will be based not on 20 seconds of video but a whole series of events leading up to the shooting. It will center around the idea of being reasonable.

Is it reasonable that some random guy, miles from home, just happens to wander into a construction site to "look around"? There is an enormous difference between "looking around" versus "looking for".

Is it reasonable that someone just looking around would bolt when a neighbor notices him?

Is it reasonable for someone to charge an armed man, grab their shotgun and start punching them? If he was truly in fear for his life, that seems the least reasonable thing to do especially since he could have veered off into a yard. If you are being pursued by a vehicle, the best way to avoid them is to get off the road and there were plenty of yards to take off into that would have ended the pursuit. Maybe they would have shot at him but you are likely to survive a shotgun blast 40 yards away, not so much at point blank range. 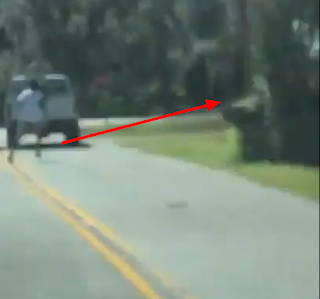 I have done enough shooting to understand that in a confrontation between an unarmed me and an armed anyone else, I am in a bad spot that would be made worse by charging at the armed man. So why would a reasonable person do that unless they were concerned about maybe getting arrested and going back to jail (for the third time)?

Is it reasonable to assume that Gregory and Travis McMichael were, as they said, in pursuit of someone to make a citizens arrest and not out intent on killing anyone?

Is it reasonable that Gregory and Travis McMichael were aware that the neighboring house under construction had been broken into multiple times and that someone sneaking around in that house was suspicious, as well as illegal?

Is it reasonable that someone being wildly attacked would fear for their life and use deadly force in defense?.

Would a reasonable and prudent person take the irreversible step of pulling the trigger and killing a man if they though that Mr. Arbery intended to take the weapon from Travis McMichael and turn the gun on him?

Reasonable doubt will include a lot of grey areas, like were the McMichaels justified in pursuing Arbery to make a "citizens arrest"? They never actually made the citizens arrest but the question of them pursuing Arbery will come up. Motivation is going to be key as you are absolutely allowed to defend yourself when under attack and in fear for your life/serious bodily harm (like getting struck in the head repeatedly or having your gun turned on you). The additional video evidence is going to be very helpful as we see Arbery walking down the street, not "jogging", looking around before entering the house under construction and then pretty guilty looking bolting down the street when a neighbor saw him. Then we saw video of him that day in the property snooping around, but only the first few seconds and not what happened the rest of the time he was in there. Curious that is being withheld. Then we saw video of him on other occasions, including at night when he has no reasonable reason to be there. He wasn't a damn "jogger" gunned down by Bubba white supremacists, he was a career criminal and a thief (convicted for shoplifting) who was dumb enough to keep going to the same place looking for something to steal.

The narrative is spinning around like a weather-vane in a tornado. The McMichaels have already been convicted by the Left on social media and now that the evidence is coming out that undermines one narrative after another, they are desperately trying to ensure that their desired outcome happens anyway.

For the race hustlers like fake black guy Talcum X (aka Shaun King) the story now is all about narrative control. A lot of "community activists" and black clergy depend on the narrative to avoid gainful employment.

If you are a reasonably smart/clever young black man, the clearest and easiest path to a comfortable upper middle class living and possibly political office is not to go into a professional, demanding field like accounting or engineering, it is to become some sort of activist. Whether that means becoming a clergyman or a community activist, running a "non-profit" urban organization or getting a job in the "diversity" office of some big corporation, it is the pathway to being highly respected, at least in your own community, while making big money and being influential.

Cases like the Arbery case, as with Trayvon Martin and Michael Brown, start to undermine their grift as the evidence comes out. Just as we see in so many "unjust" police shootings, the now ubiquitous video evidence overwhelmingly shows that cops acted appropriately. Ironically it was the black activist community clamoring for body cams that now say they are racist because the video keeps showing the police were justified. Not in every case of course, there are so many encounters between police and the black community thanks to their proclivity for criminal behavior that bad cops are going to do bad stuff, but in the vast majority of cases the video evidence justifies the police action which chips away at the narrative. So the community activist types fight tooth and nail for every case even when it is obviously bogus because they need to keep the narrative going of white people hunting down black people, even when the opposite is true.

Regardless of what online "conservative" personalities and race hustlers alike say, this is far from a "clear cut" case of murder. Reasonable doubt ought to win the day for the McMichaels when the whole story is unfolded. Ominously it looks like the forces invested in the racial grift have already started stacking the deck. More on that in the next post.
Posted by Arthur Sido at 8:45 AM