More On The State Of American Conservatism

It isn't really news that America's "conservative" political wing is mostly impotent and only concerned with conserving a handful of cushy gigs for men who write the same columns over and over again. American conservatism (assume the scare quotes for the remainder of the essay) has rightly been likened to a mirror of American liberalism. Wherever the Left goes, the "Right" will shift to stay in technical opposition but not too far away to be considered dangerously radical. It doesn't function to provide an actual principled political movement but rather serves only as controlled and tame opposition to the worst excesses of the Left. This is a topic I have discussed before, for example Open Borders, Sodomy and Israel: American Conservatism In 2019 where I wonder how conservative a movement can be when it embraces degenerates like Chad Felix Greene and Rob Smith. They can call themselves conservative and no one is allowed to question it.

That was last year and if anything is true about America's political scene right now, it is that things are moving at breakneck speed. What is conservative is changing as rapidly as it has in my lifetime and in certain circles conservatism is hard to distinguish from liberalism other than being in favor of tax cuts and more obsequiousness toward Israel.

There have always been dissenting voices in American conservatism. The paleo-conservative movement, epitomized by Pat Buchanan, was once a significant force before being vanquished by the neo-conservatives and banished into outer darkness. The flagship publication of the paleo-cons, Chronicles, is still around but has a fraction of the readership of outfits like National Review. Today most of the dissent is in the Dissident Right, a very broad umbrella term that covers a lot of different people, many who dislike one another. But back in 2002 a new magazine launched that promised to be a different voice in conservatism, most notably for being opposed to the endless wars championed by the neocons. The magazine carried the somewhat pretentious name The American Conservative (TAC) and was founded by Pat Buchanan, Taki Theodoracopulos and Scott McConnell. It was later published by rogue Ron Unz for a few years. TAC was often smart and contrary, and still to this day publishes columns from Pat Buchanan who was run out of polite and respectable conservatism years ago.

But a few years ago, TAC began to change. Rod Dreher became the most prolific writer on the website, often with all five of the "trending" articles under his name. The other writers received far less attention. For most of 2016, TAC seemed to be little other than a vehicle for Dreher to push his upcoming book, the wildly overrated and generally ridiculous The Benedict Option (see my review here). No matter the topic Dreher was writing on, he always managed to circle back to The Benedict Option. I used to read TAC daily and often read multiple articles per day but I haven't really read much from TAC for years. Dreher comes across more and more as being both mincing and timid as well as pretentious. He sometimes will walk awfully close to the line of Wrong Think but always backs off at the last moment, knowing the limits of where he can walk without getting cast out. Even his current avatar at TAC's website is effeminate and off-putting. I know he is married and a devout Orthodox Christian but that little drawing makes him look like a fairy. 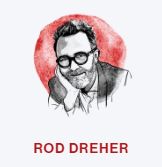 The trajectory of the magazine seems to be less and less conservative by the day, although I still had TAC in my blogroll until today and try to always click on Pat Buchanan's essays. Then this came along: 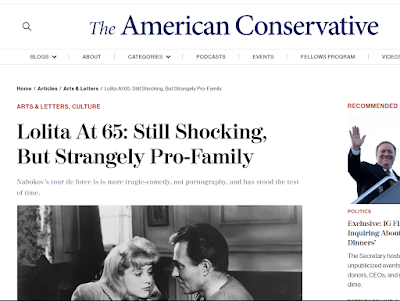 If you are unfamiliar with Vladimir Nabokov’s Lolita, and I haven't read the book, the story details the "affair" between an adult man, "Humbert Humbert", and a 12 year old girl named Dolores that he nicknamed Lolita. She is the daughter of a woman named Charlotte who has a room to rent. When checking out the room, Humbert sees Lolita and is smitten, moving in and eventually marrying Lolita's mother to be close to her. When Charlotte dies in a accident, Humbert takes Lolita on a road trip and engages in a sexual relationship with her. Remember again that in the book Lolita is 12 and stands 4'10". It was later adapted into a couple of films, including a more recent version with veteran actors Jeremy Irons and Melanie Griffith.

Lolita might be a great work of fiction, like I said I haven't read it, but at the best it is a dark exploration of a man tortured by an obsession with young girls. That might be an interesting topic but just because the object of his obsession and his sexual abuse ends up pregnant later in the book (dying in childbirth) that doesn't make it "pro-family". I read the whole piece by Leonora Cravotta and for the life of me I can't find anything "pro-family" in her entire fawning essay, and fawning is the right word. She ends her homage to Lolita with this paragraph:

Not surprisingly, Nabokov has commented that he had repeatedly thought of “burning Humbert Humbert’s little black diary.” The canon of 20th century American literature is embarrassingly richer for his having changed his mind. As Nabokov once said of his infamous nymphet, “I find Lolita to be a delightful presence now that it quietly hangs about the house like a summer day which one knows to be bright behind the haze.” And six decades later, we, his gentle readers, are still basking in its sunlight.

Basking in the sunlight of a story about grooming a young girl, sexually abusing her, and committing murder? That is some interesting sunlight she is basking in.

Surprisingly such a controversial essay only generated a handful of comments. While Rod Dreher's recent essays generated hundreds of comments, only 9 appear on this review of Lolita even though it still is at the top of TACs website more than a day later. Perhaps some of that has to do with the sudden censorship by the TAC moderators. I was going to comment on Cravotta's essay only to find that the dissenters at TAC don't like dissent all that much.

Oops, I guess my past comments strayed too far from what is considered "conservative" these days. Glowing reviews of books about child abuse? Conservative. Questioning the rejection of human biodiversity? Not conservative. I half wonder if my ban was because of being racially insensitive or for complaining about Dreher's incessant shilling for his book. Regardless, I have seen this sort of ban-hammer at places like TAC and back in the day at The Gospel Coalition (lots of people were banned by TGC). What they all have in common is that they are run by people who are very careful to color inside of the lines, and when the Left moves those lines, they obediently keep coloring in the newly formed lines. Take a website like former TAC publisher Ron Unz's unz.com which has been completely banned by Facebook. There is some crazy, wacky stuff over there. 9/11 trutherism, questioning the Holocaust, all sorts of stuff and the comment section is the Wild West. But it is honest debate and discussion. Topics for publication and for comments are not censored and as a result it is a far more interesting and thought-provoking forum. The American Conservative? The worst thing I can say about it is that it is safe and boring. They publish safe and boring people taking safe and boring positions all the while pretending to be some bold dissenters.

On the issues that really matter the most, TAC is hardly distinguishable from National Review or even little Billie Kristol's new endeavor, The Bulwark.

I say this all the time but I am saying it again. The greatest impediment to a real Right-wing resurgence in American politics is not AOC and Ilhan Omar, nor George Soros, or even the leftist media. The greatest impediment we face are the gate-keeping cucks who pretend to be conservatives and right-wing but are just holding the line of respectability dictated to them by the Left. Little wonder TAC darling Rod Dreher preached withdrawing from the culture in The Benedict Option. He and his fellow TAC writers are cowards afraid to jeopardize their hustle.

A pox on The American Conservative and all the gatekeepers who censor real right-wing conversation.
Posted by Arthur Sido at 12:49 PM