Is It Really About Justice?

In 2017, a cop in Minneapolis shot and killed an unarmed woman. She was approaching the police vehicle to ask for assistance. She was barefoot and in her pajamas. The police in the vehicle were responding to a call and testified that they heard a "loud noise" and were startled. There is no evidence this happened and they didn't mention it in their initial report. The officer driving had his window down and his partner in the passenger seat shot the unarmed woman, who was not touching the vehicle or acting in a threatening manner. The shot went through the driver's side window and struck the woman, meaning the officer shot across the body of his partner. She bled out quickly on the scene.

The officer who shot the woman was arrested, tried and convicted of third-degree murder and second-degree manslaughter. He was sentenced to 12.5 years in prison for killing an unarmed woman and the city paid an enormous settlement for the wrongful shooting.

Justice was done and community activists were pleased.

The woman who was killed was Justine Damond (aka Justine Ruszczyk), a white Australian woman, and the cop who murdered her was Mohamed Noor, a Somalian living in Minnesota.

When the officer convicted of killing her was found guilty, you didn't see an outpouring of gratitude from the people who complain about police brutality. As I detailed in a prior post last May, Justice For Justine Damond?, what we saw instead were blacks complaining that he had been found guilty of murder. From the prior post:

I would think that a cop who murdered an unarmed woman being convicted of murder would be cause for celebration and an example of justice being done but it apparently was just more racism.

According to the "Somali-American Police Association", and imagine explaining that to the men who founded Minnesota, this finding of guilt would make it harder to recruit minorities to become cops.

What a shitty message that denigrates all of the black cops who sign up for a a thankless, dangerous job.

Meanwhile, as predictably as the sun rising in the east, the "protests" for "justice" have devolved into wanton rioting, mayhem and looting. It is hard to make the case that you are protesting for justice when it looks mostly like you are just taking advantage of an opportunity to loot and steal and commit acts of violence. I am not going to link to any videos, they are pretty easy to find (there are a bunch here at Zero Hedge), but I can't see how someone can say with a straight face that this looting is about "justice" when you see people loading flat bed carts with big TVs or women casually pushing a cart through a wrecked store grabbing whatever strikes her fancy.

As I have been saying for a while, blacks will circle the wagons around each other even in a case like Mohamed Noor gunning down a woman in her pajamas because they see politics as I have come to see it: a tribal and racial conflict with no place for the runner-up. Stacy Abrams, a possible contender to be Joe Biden's running mate, was right when she said:

While the killer of Justine Damond saw his community speak out against his guilty verdict while white Minnesotans sat mostly mute and stayed entirely peaceful, Minneapolis is burning because a white cop killed a black man. Stores looted and burned, property destroyed, police vehicles trashed. Burning down the Autozone to strike a blow for "justice"! 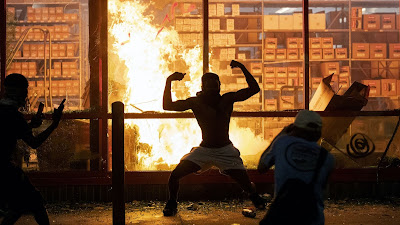 The ongoing protests/rioting/looting/general mayhem in Minneapolis over the death of George Floyd aren't really about "justice". Four cops were fired. At least one will face criminal investigation, likely at both the local and Federal level, and the other three probably will face criminal charges as well. The U.S. Department of Justice has declared their investigation to be a "top priority"....

In other words, the DOJ is trying to fend off additional looting and rioting.

What would justice in this case look like? Summarily executing the cops involved in the street?

At least one looter was shot by a pawn shop owner and armed citizens are showing up to help protect businesses. If this continues into the weekend, we could see a lot of people getting hurt. "Protesters" have already been spotted outside of the homes of the cop who was kneeling on George Floyd and the  home of the county prosecutor.

Things are getting out of hand and the cops are reportedly standing down and letting the looting happen.

The thing is, they are getting justice. We just aren't getting peace. In other words, this isn't about justice at all. When a cop oversteps and kills someone and then gets convicted, the gauge of whether it was just or not is entirely based on the race of the cop and the person killed. It doesn't even matter if the cops were justified or not, there are still people invoking Michael Brown as a martyr when it was obvious he was attacking the cop who shot him in justifiable self-defense.

In a few months George Floyd will be mostly forgotten but the stores burned won't be re-opened and things in the black community won't be any better. Likely they will be worse. When career criminal Freddy Grey died in police custody in 2015, the city exploded in riots and the police backed down on enforcement. Freed from the oppressive police brutality, Baltimoreans responded with an unprecedented era of peace and prosperity: 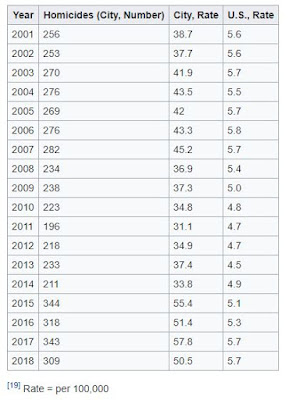 Why would a cop even get out of his car unless someone was shooting at him in a majority black neighborhood? Nothing good is going to come of it and there is a decent chance that you can end up on camera, fired from your job, having your family threatened and perhaps even ending up in jail.

Summertime just got a lot hotter and the next incident of a black guy dying at the hands of a cop, regardless of the circumstances, could tip the whole thing over.