I am pretty sure this is not just a really late April 1st troll. 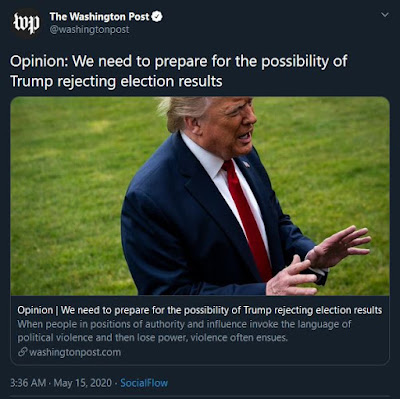 Allow me to take you on a trip down memory lane.

The time was November of 2016 and the election was at hand. All of the smartest and bestest people just knew Hillary Clinton was going to win, defeating Donald Trump for the presidency and symbolically smashing the white male patriarchy. She even planned to give her triumphant and screechy victory speech in a venue with an oh-so-subtle glass ceiling. Get it, glass ceiling? Classic.

The media was entirely on board, they were #WithHer, other than evil Fox News. The gloating started early in the day on that fateful morning and the celebrations were prepared, the champagne was on ice, the soyboy beta orbiters were panting in anticipation of scoring with some hairy legged chubby feminist caught up in the euphoria of the first female President.

Then the results started to come in and faces started to fall. Ohio. Florida. Then the big three of Wisconsin, Michigan and Pennsylvania. The looks of horror were delicious as the media talking heads, on live TV, had to react to their candidate losing. Some pretty much lost their minds right on live TV, even the normally sober PBS hosts we were watching started to go berserk. It made me wish I had voted for Trump but even still it was deeply satisfying, like I needed a cigarette afterward.

The Washington Post, Pravda for the Deep State, has spent every moment since Trump won in 2016 trying to cast doubt on the validity of his election and de-legitimize the results of an American election. While the leftist media has worked at odds against Republican Presidents in the past, never have they gone to such lengths to contest the results of an election.

Meanwhile, the former candidate Hillary Clinton has likewise fanned the flames of her rabid fan base who often call her the "real President" and like petulant children refuse to even refer to President Trump as President or even use his name.

This editorial at the WaPo is another example of the projection from the Left. If Trump loses in November, as is reasonably likely even though he is running against a credibly accused rapist suffering from dementia, his supporters will be upset but they will go on with their lives because that is what people who support Trump do: raise families, go to work, pay taxes. If he wins re-election? I expect some significant violent civil unrest. Past behavior from the Left supports that contention.

The only question I have is whether or not the Left has so deeply bought into their own religious faith-affirming story about "Russian hacking" that they believe this sort of stuff or if they are just repeating what they think their readers want to hear. Either way, we no longer have anything resembling a free press in America and haven't for a long time.
Posted by Arthur Sido at 1:27 PM