As expected, the warmer weather combined with a long weekend led to the usual results. From Chicago...

Ten people died and 38 others were wounded in weekend shootings in Chicago — the deadliest Memorial Day weekend since 2015, when 12 people were killed.

Despite the state’s stay-at-home order, the weekend’s death toll has already surpassed last year’s holiday weekend, when seven people were killed and 34 were injured during the period from 5 p.m. Friday through 5 a.m. Tuesday.

48 shot during a long weekend but the prior weekend saw 38 shot (six fatally). It is looking like a hot summer for Chicago again in 2020.

‘These are not random’: 9 dead, 5 injured amid Memorial Day weekend violence in Baltimore

Baltimore Police Commissioner Michael Harrison sought to reassure residents at the end of a holiday weekend that left nine dead and five others injured, even as city residents remain ordered to stay at home because of the coronavirus.

In a news conference Monday afternoon, Harrison called the level of violence “incomprehensible and unconscionable,” but noted two of the shootings had occurred inside residences, suggesting that the victims knew the perpetrators.

“These are not random. We know for a fact that these are not random,” Harrison said of the incidents while speaking at the department’s Northern District. In several instances, victims had been carrying handguns; a few of the dead had been previously convicted of crimes like attempted murder. “Some of this was retaliatory violence," he said.

Better marksmanship in Baltimore. This morning another man was fatally shot in Baltimore, it was at 1:30 AM so I am not sure if that counts as a Memorial Day weekend shooting or not. St. Louis made a solid showing.....

St. Louis police are investigating a string of shootings that left 19 people shot and four dead.

There have been at least 63 homicides in St. Louis City this year. That’s close to the same total as this time last year, despite the coronavirus outbreak.

The shootings happened just hours apart across the city.

St. Louis is quietly one of the most violent cities per capita in America but doesn't get the same attention as places like Chicago thanks to Chicago's sheer numerical superiority. Cleveland, the Mistake On The Lake, had their share of shootings plus a rash of stabbings.....

Memphis is also an underrated city for killings per capita.

A rash of shootings over Memorial Day weekend left at least five people dead and multiple others injured, according to the Memphis Police Department.

Not even sure how many were shot, they only counted the dead.

There was a mass shooting in Daytona, but that will get it's own post. Even Myrtle Beach had some "out of town gang related" shootings.

Recent shootings along Ocean Boulevard in Myrtle Beach are causing some tourists to rethink whether they’ll visit the city in the future.

The three shootings, all of which authorities have confirmed were gang related, have caused concerns to rise for tourists.

The "acting like animals" quote comes from these three ladies from Virginia.... 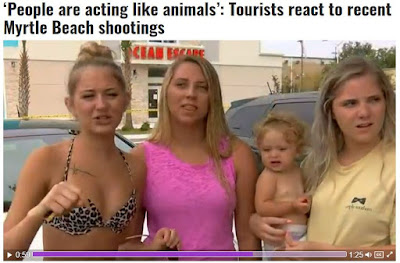 Uh oh, that sounds vaguely racist. One of the three shootings led to four people wounded, so that is another mass shooting and will be included in the Daytona post. My hometown of Toledo, Ohio had a bunch of shootings including six people shot in a 24 hour span.

With the weather warming up and society beginning to open up again, Toledo police anticipated certain violent crimes might start to increase. But six people shot in four separate shootings in one night is still more than usual.

From late Sunday night into early Monday morning, police responded to four separate shootings across Toledo. Six people were shot and treated at local hospitals, and police believe that none of the wounds reported are life-threatening, Toledo Police Sgt. Brian Smith said Monday. 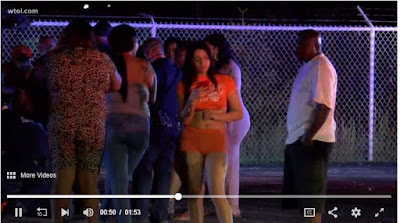 Toledo is having all sorts of problems with large gatherings, which often result in shootings if the demographic mix is right. A bunch of people were arrested on Monday at a large gathering in Toledo.

Approximately 700 people, along with 300 to 500 vehicles were loitering, trespassing, and causing a disorder, police said. Police received several 911 calls of people fighting, individuals with guns and some of them shooting guns, court records show. Several vehicles also blocked the street. 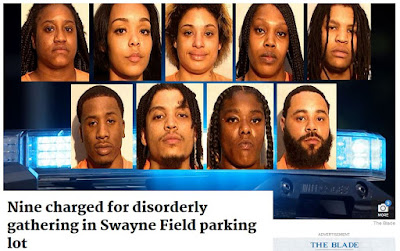 The gal on the bottom, second from the right, has an awfully friendly face. 700 people at the gathering. Clearly the high rates of coronavirus among blacks are the result of racism.

It is a little harder to get good numbers on other cities. The Detroit papers have lots of individual stories but I didn't see a comprehensive listing of the shootings in Motown over the weekend. But generally speaking, urban/gang/teen gun violence isn't really taking a holiday.