Why Don't Americans Trust The Media

Allow me to introduce James Hohmann. James is "National Political Correspondent" for the Washington Post (Democracy dies in darkness!) 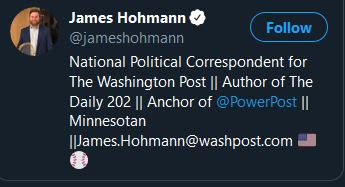 The Washington Post is the paper of record for the national elites and oligarchs who live in the Washington D.C. region. If you aren't staring into the WaPo while waiting for the Metro, do you even matter in America? Don't bother answering, everyone that matters already knows the answer. Apparently being "National Political Correspondent" basically means tweeting all day about every single thing Trump says and why He Was Wrong and Orange Man Bad. Nice work if you can get it.

So Mr. Hohmann tweeted this: 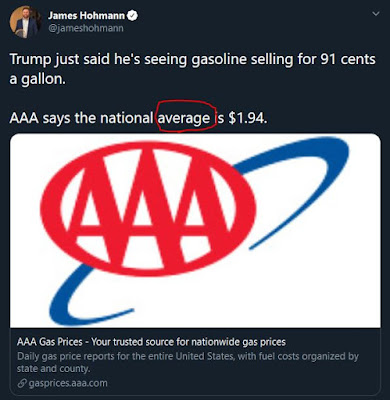 As everyone knows, the national average gas price absolutely does not include a wide range of prices spread out of a country of 330 million people, including some states with really low fuel taxes and other states with very high fuel taxes, and that "average" gas price really means "the lowest price anyone can buy gas anywhere in America". If AAA says the national average is $1.94, you obviously can't buy gas anywhere in the country for less than $1.94. That is what average means. Good thing we have smart people like Jimmie to explain complicated mathematical concepts like "average".

Needless to say, the replies to his tweet were blistering. Apparently one can graduate from Stanford, *with honors* no less, and still not understand how averages work. Plenty of people helpfully pointed out to him what "average" means and provided examples of gas under $1/gallon, something that has been widely reported for a week now. His ratio is something pretty incredible to behold. He tried a little bit of damage control but no one is buying it:

"I didn't say Trump was lying even though everything I tweet says Trump is lying". I am not sure what would be worse, if he was just flat out lying to people when he posted the original tweet, or that he is so arrogant that he assumes only DC prices matter or that he really doesn't understand how averages work.

Whatever the case, there is a reason that we say that the media is the enemy of the America people and this is a prime example.
Posted by Arthur Sido at 8:08 AM