The Myth Of The Non-Violent Offender

The Left in America loves letting criminals out of prison. Not because it is smart or "just" but because doing so ensure that minority voters will continue to vote for leftist candidates. Even though minority communities, specifically black and mestizo communities, suffer the most at the hands of the significant criminal element in their own people, they still seem loathe to lock up their fellow minorities. It is weird, pathological and suicidal.

The Chinese coronavirus scare/pandemic has given leftist groups like the ACLU, a new reason to push to furlough prisoners. We can't have criminals being exposed to a sickness! Sure, lots of law-abiding regular Americans in essential jobs like health care and law enforcement are required to keep working at great risk to their own safety but people who are generally speaking worthless and more often than not an enormous detriment to society must be protected. 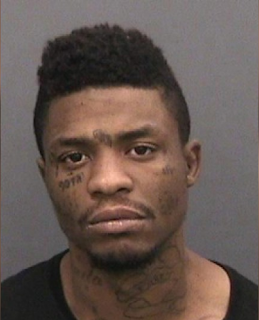 An inmate who was released from a Florida jail in an effort to slow the spread of coronavirus is back behind bars and accused of committing second-degree murder the day after he got out, deputies say.

Joseph Williams was released because he was a "low-level, non-violent" criminal who was arrested earlier on March 13th for possession of heroin.

Here is the timeline:

In less than 48 hours, he was released from jail, managed to get his hands on a gun and murder someone.

We are supposed to believe our prisons are full of people who are just swell, but they got caught with an ounce of weed and now are incarcerated unjustly for decades. It is a safe bet that "low-level, non-violent" criminal Joseph Edwards Williams wasn't a first time offender and an even safer bet that he has been breaking various laws without being caught for most of his 26 years (** Update**: Guns America reports that Mr. Williams has an extensive rap sheet with 35 previous arrests and several major convictions). You don't go from model citizen to heroin user to murderer in a week.

Almost without exception, people are in jail for a reason. Maybe you think laws against marijuana possession are unjust but everyone knows that it is illegal in most places to possess and especially to sell marijuana. It isn't the fault of the system if you decide to sell pot in spite of it being against the law and are dumb enough to get caught. Again, I doubt there are many people in prison who bought some weed for the first time, got busted and went to jail. For "low-level, non-violent" drug offenses, you either have to have a significant amount of drugs or be busted multiple times to actually do any time.

People who are criminals are almost universally low-lifes who would rather break the law than simply be a decent human being. A lot of them, even the "low-level, non-violent" criminals, are guilty of doing a significant amount of crime before getting caught and are useless for much other than committing crime, being a burden on society and going in and out of jail.

If we want to reduce crime we need to start stringing up people who commit violent crimes in public. Let a few murderers, rapists and child molesters swing from a gibbet for all the world to see and watch the crime rate go down. People like Mr. Williams might decide that instead of shooting someone as soon as he got out of jail, he could maybe look for a job instead. Probably not but at least hanging him would save the taxpayers a ton of money.
Posted by Arthur Sido at 8:58 AM