Something that was common for all of human history until recently, and is still common in much of the world, is scarcity. Most humans for most of human history lived hand to mouth, a subsistence existence that could be wiped out in the blink of an eye by a famine, natural disaster, war or injury. The idea of having giant stores full of food for the taking wasn't something they could even dream about. Even as recently as my early childhood, it was common for stores to not have fruits and vegetables out of season. Today you can get "fresh" fruits and vegetables year round. Strawberries, mangoes, sweet corn. The seasonal nature of food is mostly lost on us.

Pretty much anything you want you could, up until recently, get almost immediately. Need some ammunition for your .22? Delivered to your door, cheap and fast. Dog treats? Two day free shipping. Almost any food you can imagine could be purchased inexpensively from one of half a dozen grocery stores within a short drive. Socks, diapers, toilet paper. All you could want from the comfort of your chair or perhaps even while sitting on the can.

Therein lies the problem. People who want for nothing find little value in anything. We buy crap, use it once or twice, and then pitch it. We just buy stuff for the sake of buying stuff. For example, my mom did a ton of laundry when I was growing up and as far as I can remember she always had the same laundry baskets. Today when you get a laundry basket, you are lucky if it lasts for a few months without breaking. So we go to the store over and over to buy the same cheap crap and congratulate ourselves on getting it so cheap, never realizing the true cost of buying disposable crap.

Suddenly in early spring of 2020, people are starting to learn about scarcity.

They have a lot more to learn.

There have been a slew of articles talking about the shocks to the American consumer supply chain. Toilet paper is the obvious one and for people like me the ammo scarcity is becoming of greater concern by the day. The recent precipitous drop in oil price is another as plummeting demand coupled with increased production and a lack of storage space had oil futures trading for a negative price recently. For most consumers, gas at the pump just appears by magic but the path of getting oil from the ground, then to a refinery and then finally to their gas station is a long and complicated one. Most of the products we consume are similar. Christmas toys for the next holiday season are ordered and produced well ahead of the shopping season so they can be in place for holiday sets in retailers on time. But there is one segment of the economy that will impact every American: the food supply.

What many people don't understand is how complicated the process is to get food to the grocery store and how much that process relies on consistency and predictability. Just about everyone has experienced the run on stores when bad weather is predicted. Those shortages are usually just bread and milk and only last a few days but the repercussions of the Chinese virus are going to last for much longer. For the "just in time" food supply to function, everything up and down the supply chain has to be working in tandem. When one part of the chain falters, it screws up the whole thing.

Let's look at the meat segment of the grocery market. In normal times, you go to the store at pretty much any time of the day and there is ample beef, pork and chicken. Last night we went to Sam's Club and one of the Meijer stores in Fort Wayne and in both the fresh meat bunkers were pretty bare and especially chicken. You could get chicken drumsticks but no chicken breasts. This has been the case for a long time now. Beef was purchase restricted at Sam's, I didn't see a sign at Meijer. So what is going on?

The disruption is occurring at the slaughter stage. There are stories all over the media about processing plants shutting down:

Farms in Maryland, Delaware to Destroy 2 Million Chickens Due to Staffing Shortages

This isn't tinfoil hat panic talk, this is mainstream media outlets and industry publications reporting on processing plants being closed. I know a number of Amish guys who raise cattle and they are very worried as the prices they are being offered for cattle is dropping like a stone and even cattle contracts for sale are being canceled.

Those unfamiliar with the meat industry might be a little confused. So what if some processing plants closed?

When you can't move your fat cattle that are ready to butcher, a lot of things happen. You obviously have to keep feeding these massive cattle and they eat a lot seeing as they are over 1000 pounds of beef on the hoof. They are also crammed together for longer periods of time and that breeds disease so they need more medications to keep them from dying off. Further down the food chain, producers are also experiencing a backlog. How this works is typically something like this:

- A farmer gets day old baby calves that are penned up in barns and bottle fed a milk replacer. He keeps doing this for a number of weeks until they are ready to be weaned off of milk replacer and begin a diet of grain. Imagine a barn with 300 baby calves all upset at not getting their bottles bellowing non-stop for a day. We can always tell when our neighbor weans calves.

- These baby calves are now moved to a different barn where they get fed a straight grain diet to maximize weight gain. Sometimes they get moved again but eventually when they are 500-700 lbs or so, they get shipped out to a different farm where they are finished to slaughter weight. Many of the finishing feedlots are out west in places like Greeley, Colorado, a dumpy town with a bunch of cattle feedlots like this one on the outskirts of town..... 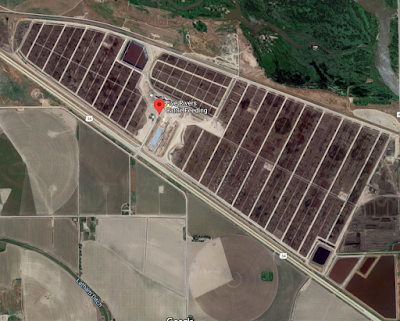 You can't see it well but all of the brown rectangles are giant pens full of cattle. The whole area has a lovely odor of cow manure omnipresent. Even as big as these feedlots are, they are finite in size and you can only truck in so much feed and truck out so much manure.

Cattle are full of meat but it isn't all the same. From the same animal you get the high end cuts of steak and roasts and you also get stew meat and ribs and hamburger. 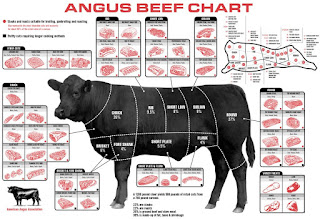 Normally the different parts of cattle have their own destinations. Hamburger tends to go to fast food places as well as retail sales. Fast food places are still open, at least through the drive-through. On the other hand, a lot of the choice cuts of beef go to sit down restaurants and they are obviously not buying much as places like Outback Steakhouse and Texas Roadhouse are essentially closed. That means the demand side of the equation at the processed beef end is screwed up and at the same time the plants that process these fat cattle are closed or running with short staff.

What this means is that big cattle are piling up in feedlots. In turn that means these feedlots don't have capacity to bring smaller cattle in to feed out so now these mid-sized cattle farms can't get rid of their cattle. That leads to people raising bottle babies with nowhere to send their weaned calves, so they are stuck feeding them grain until they get trucked out but that then means that they don't have room to start new bottle babies. Cows are still having calves all the time but now there is a vastly reduced market for these baby calves so I am assuming a lot of them are simply being euthanized. A euthanized calf obviously never grows into a full size beef steer. That is going to lead to shortages in the mid-term as the supply of young cattle shrinks. Cattle take a relatively long time to reach mature weight, compared to hogs and chickens. You can't just flip a switch and make more cattle ready to butcher.

On the other end, there is starting to be some talk of euthanizing fully grown cattle. At $1 per pound, just to use a round number, you are talking close to $1000 animal getting a bullet in the head because the feedlot can't afford to feed them indefinitely and no one is in the market to purchase them. That means enormous losses for the feedlots who put out a bunch of money are few months ago to buy these cattle at 650 pounds and then dumped a ton of food and medicine into them.

Feedlots will go out of business, causing a logjam on the back end. Producers won't have fresh waves of baby calves to replace the cattle moving up the supply chain, leaving a gap on the front end. Our food system has moved away from small local farms raising animals that are slaughtered and processed locally to supply local stores into a globalized system where animals are raised in an industrial fashion to supply stores with just enough meat to supply their needs each day. What this means for the average consumer is that meat is going to become scarce and it is going to get expensive.

This also will impact grain prices as most of the grain you see in fields around America goes into livestock. A disruption to that industry will ripple throughout the agriculture industry as a whole.

What happens when people can't get enough of the food they want? If you think they will just calmly accept the new normal, you haven't been paying attention to what is going on in America with our new "Americans". People are going to get frustrated and angry, and people like that tend to do things like riot and steal.

We have removed the food supply chain from our daily lives. The meat in my freezers is mostly beef and pork that we raised on our own little farm. I have two steers that I could butcher right now if meat were scarce. If things get really bad we could shoot a deer or turkey. The vast majority of Americans don't have that option. They live in concrete urban prisons and sterile suburbs where you can't even have a couple of chickens without raising the ire of the homeowners association. These people are at the mercy of the fragile American food supply and there are warning signs that the system is in trouble.

We might look back at the less than 50,000 people currently listed as dying from coronavirus, a pretty dubious number in the first place, and think things weren't so bad compared to widespread food shortages, Depression-era level of poverty and violent civil unrest.
Posted by Arthur Sido at 11:26 AM