Someone Isn't Having A Very Good Friday

I don't do posts like this very often, although I used to, but this set me off and I have some spare time today thanks to a combination of it being pretty cold outside and also Good Friday.

Last night I was sitting in the van with an Amish guy. He is a bit older than me and the father of 12 children, so between us we have 20 kids. We were at the home of a young Amish woman who was scheduled to have her wedding on Thursday. Weddings are the culmination of the Amish period of "running around" or "rumspringa" a term that no one Amish I know actually uses. For most of their lives they are working dawn to dusk but they mostly love it. Then they turn 16 and they get to start "running around". For some this means partying and drinking and evening activities that sometimes lead to a "Sunday wedding" which is code for "Got knocked up and had to have a quickie wedding". For most of them it just means staying out kind of late (but still getting up before 6 AM) and getting together with friends to play volleyball and sing. When an Amish boy asks out an Amish girl, he isn't asking for a casual date. Dating for Amish almost always ends in marriage and the wedding is a huge deal. For Amish girls who are told how to dress and how to behave and above all to not draw attention to themselves, this is a one-time event where they are allowed to go all out. I have posted pictures before of their "corner" where the bride and groom and their "side-sitter" attendants sit (see here and here). It is a very big deal, probably the most important moment in the lives of most Amish.

Because of the lockdown, religious services which includes weddings are prohibited in Indiana. So this carefully planned out wedding suddenly got cancelled. This was an early wedding, the season really kicks off in May and runs through the fall now because there are so many weddings. The huge number of weddings means that the master wedding schedule, a tightly guarded secret, is already full so the traditional wedding dates on Thursday are booked for the year. This couple decided to have a wedding anyway, but instead of an hours long church service attended by hundreds of their family and friends, it was just their immediate family and their bishop. No wedding service, no decorated buggies, no all day wedding lunch and dinner where well-wishers shake hands with the newlyweds. Just a brief ceremony to formalize the marriage and when things shake loose later they will have the wedding church, minus the point where the bishop joins their hands signifying they are married, and the wedding lunch and dinner. Very disappointing but they are making the best of it.

Back to the conversation I was having. We were talking about the Amish youth and how upset they are that weddings are cancelled and they can't get together weekly to play games and sing. He told me about a book he had just read about a Polish Mennonite girl who saw her country overrun twice, once by the Germans who were actually pretty decent to them, and then again by the Soviets who were notorious for their cruelty and depravity, murdering and raping at will as they inexorably drove toward Berlin. The Amish father was reminded that his Anabaptist forefathers had suffered a great deal of real persecution since the very first Anabaptists decided to baptize only adult believers. So yes, a wedding was partially postponed, and it won't be the last (we know a Canadian girl marrying a local Amish man who is in the country but her parents can't cross the border, so their wedding next week is indefinitely postponed). Yes, many Amish who are in their 70s and 80s will miss Easter church for the first time in their lives. And yes Amish youth won't be able to gather for a few more weeks. Compared to the persecution suffered by Anabaptists for centuries? Not really a big deal although that isn't all that compelling to 16 year old Amish girls who want to giggle and play volleyball with their friends.

That brings me to this morning. Our local Congressman Jim Banks posted a pretty harmless and generic Easter message on Facebook. 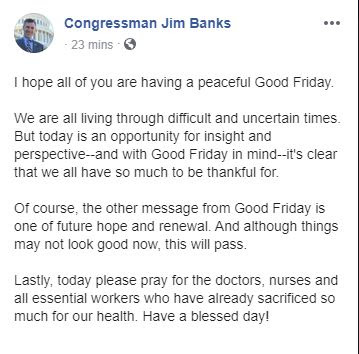 Like I said, pretty vanilla stuff. Banks is being especially active on social media as he has a credible primary challenger so we are getting a lot more posting from his office. But some people use the inoffensive posting from Congressman Banks are their personal soapbox to virtue signal, smite the patriarchy, Orange Man Bad™ post or show how persecuted they are. Entering this chat was one (Reverend) Jason Reed, a Lutheran pastor at Messiah Lutheran Church in Wolcottville, Indiana. Mr. Reed is terribly vexed that there won't be church services this Easter.

"For doing my job". At least he recognizes that being a vocational cleric is a job. Maybe he doesn't realize that thousands of Hoosiers with real jobs are not able to work right now either. Here is the good reverend wearing a dress at church (I erased his kid out of the picture). Like me, the reverend is in far more danger from being portly and out of shape than he is from the Chinese virus.

Here is the thing Reverend Reed. Easter is observed in the Christian church as a celebration of the resurrection of Jesus Christ. That is what is known as "The Good News" and that news is still good if you are a Christian regardless of whether or not you attend an hour long church service. The Christian church has suffered real persecution for two thousand years, often at the hands of other Christians, so I am pretty sure it can survive a handful of people not being present to hear a mediocre, predictable and forgettable sermon from a plump guy in a dress for one Easter Sunday.

Not to say I agree with the lockdown, because I mostly don't. The smarter path would be to encourage people who are vulnerable to stay home and people who think they are showing symptoms to self-quarantine rather than shutting down the whole country. If we lived in a nation with common sense, that would be the best approach. Obviously we don't in such a country, even before the Kung Flu hit.

Reverend Reed should be more concerned about his flock experiencing illness and job loss, rather than not being able to deliver the same basic sermon every other pastor in America has been giving on every Easter Sunday for decades. Maybe he is concerned that people will start to realize that not only is institutional organized religion not a necessity, it is mostly a hindrance to spiritual development. Then he might have to get an actual job.

The Christian church has a whole bunch of serious problems to worry about. Missing a few Sundays isn't even in the top ten.
Posted by Arthur Sido at 11:26 AM