As is often the case on Twitter, the point was made inelegantly given the limited characters on Twitter and many people replied with "Well duh, no one is allowed to gather in mass groups dummy!", which completely ignores the fact that in most of the country people still gather in large numbers at work and grocery stores. If someone were inclined to shoot a bunch of people, it wouldn't be hard to find a place.

It shouldn't have to be said but it obviously does. People buying legal firearms does not lead to more gun violence.

The people who bought those 2.4 million guns are people who are buying guns legally and going through the background check. They are buying guns to protect themselves and their families. They are also most likely staying at home as ordered. They aren't buying firearms to cause mischief but for protection and you can't protect your family and toilet paper stash if you aren't home.

The people who are doing the shooting all have a common feature: they don't obey laws. It is against the law to murder someone in all 50 states and probably even in Puerto Rico. Murder carries the stiffest penalties in all 50 states, although California will likely re-institute the death penalty for misgendering trannies in the next year or so. So, simple logic would dictate that....

Someone willing to shoot others is not a prime candidate to obey a largely toothless stay at home law.

Urban mayors in places like Baltimore and Houston are begging criminals to stop shooting each other so hospital beds can be used for Chinese virus victims but some segments of the population are simply refusing to do so. Heck, they won't even stay home. I was looking at the news from my hometown of Toledo and three people have been arrested recently for refusing to stay at home and then refusing to disperse when ordered to by the police: Christopher Kinnebrew, Malachi Wyse and Shakela Barber. Ms. Barber seems to think it is funny although her friends don't agree. 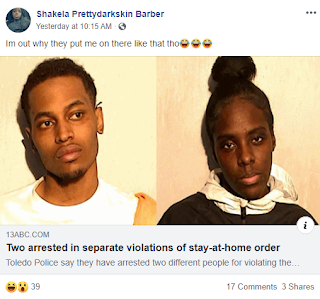 Here she is in a different shot with Malachi Wyse.

You can buy a gun outside of the regular process, and do so legally in many cases depending on where you live. I can buy a firearm from a private individual in my state at will. You can even find a significant number of "new in box" firearms for sale privately that never show up on background checks and have no 4473 attached to the transaction. So people who are buying from FFL licensed dealers are taking an extra step. I doubt those people are buying guns for nefarious purposes. I would doubt any significant number of those 2.4 million firearms purchased in March will ever be used in a crime, and even fewer by the original owner.

The Covid-19 pandemic has seen a run on firearms and ammo that is an historic anomaly. Millions of firearms and I would guess hundreds of millions of rounds of ammo have flowed into private hands in the last six weeks or so. There is little to no chance that this massive inflow of firearms will lead to more gun violence. People willing to jump through the hoops of buying a firearm from an FFL are poor candidates for becoming mass shooters. People who are legally prohibited from owning a firearm buying a handgun out of the trunk of a car? Yeah, those people are the problem and that is where we should focus our efforts at stopping gun violence. Just like it makes no sense to grope old ladies trying to board an airplane because young Muslim men like to blow themselves and others up, it makes no sense to panic about law-abiding gun owners following the legal process to obtain a firearm.