From the sketchy reports, it seems that a group of gunmen started shooting up a backyard gathering (during a pandemic). The gunmen fled and some of the people at the party jumped in a car to give chase, caught up to the original gunmen and they exchanged gunfire.

In the aftermath of the gun battle, some of the "victims" were dropped off at a local hospital and cops stopped the vehicle that they were dropped from and according to Western Mass News, made a little discovery:

Outside Mercy Medical Center on Friday, officers stopped the car dropping off the victims and found a firearm and a large quantity of cocaine, the post said, and a man and woman were arrested. The two arrested were not shot. None of the four gunshot victims are cooperating, he said.

I will concede that I am not a hardened criminal but it would seem sensible that if I was taking people who had been shot to the hospital, where cops are often present, I would try to remember to leave my gun and "large quantity" of cocaine at home. The same story contained a photo of the crime scene. 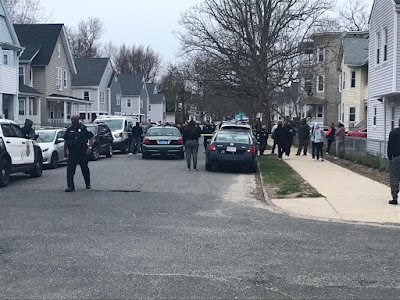 Based on the photo and the circumstances, this looks like yet another mass shooting matching the typical profile that will get no attention in the media.
Posted by Arthur Sido at 7:08 AM