Just A Congresswoman Praising Allah Because Actual Americans Are Dying 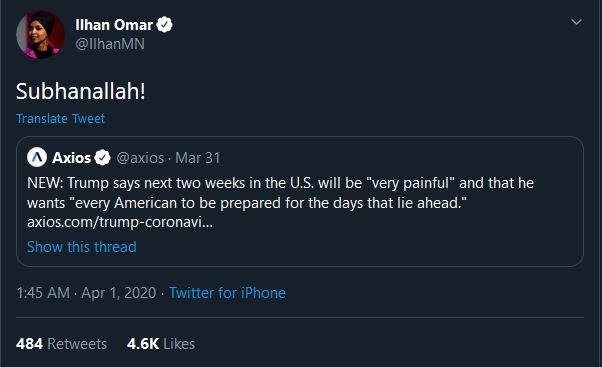 Subhanallah apparently roughly translates to "Glory to Allah", and although it can be used as a simple exclamation it seems the primary meaning is praising "Allah". Ms. Omar of course is accusing people of being outraged at this of "Islamophobia".

A lot of people who understand Islam better than I do are calling her out for both saying this in the first place and then lying about what it means. Imagine if a Christian political leader like Mike Pence retweeted a story about an ebola outbreak killing thousands of Africans and wrote "Praise Jesus!". Do you think a tweet like that would go unremarked by the media or by Ms. Omar herself? I would imagine the response would cause most of social media to meltdown completely.

If nothing else, her intention could be characterized as murky and she maybe should have used a different expression that was less open to "misinterpretation". I suspect she said what she said specifically as a signal to her co-religionists that she sees the Chinese coronavirus as some sort of biological smiting of the infidel Americans by Allah. It is no secret that in spite of Americans giving Ms. Omar and her family shelter in America after they fled from their own savage people, Ms. Omar hates America and she really hates Americans. She is the kind of person who cheered in Black Hawk Down when the Americans got killed, even though the Americans were trying to protect her own people from the violent warlord Mohamed Farrah Aidid. She famously described 9/11 as "some people did something", when the "some people" were her fellow Muslims and the "something" was murder 3,000 Americans. She constantly bitches about America being "racist" and miscellaneous other crap. In general she is the epitome of the ungrateful refugee who has a standard of living unimaginable in her own country but still seems unsatisfied.

Which brings me to my main point and I don't wish to beat around the bush here.

What possible benefit to America is there in allowing people like Ilhan Omar to live here?

Besides marrying her brother in an immigration scam, there doesn't appear to by much she has done since moving here, apart from getting a bunch of free stuff and complaining about the people who took her in. She has held a couple of bullshit government "nutrition" jobs and some political jobs but hasn't contributed a single, solitary benefit to America since she arrived here. She is dumb as a stump although smart enough to modify her headcovering to seem less alien now that she is in Congress. In all she is a net drain on America, costing us a great deal to "educate" and generally doing whatever she can to turn this country into the sort of shithole that her family fled from. Accounts of her early life and who she really is are very sketchy and we really have no idea who she is or what her story is.

No one ever seems to ask why someone who comes from a failed society that generates a ton of refugees and apparently is trying to replicate the sort of values that caused her own country to collapse in the first place in the U.S., should be trusted as a legislator in a country full of people who have already proven they can create and sustain functional societies.

A sane immigration policy would ask "What benefit does this person bring to the United States and her people" before someone was allowed to move here. Unless you consider it an inherent benefit to have more people who are useless and low IQ, there isn't a compelling reason to have someone like Ilhan Omar in America at all. There is no benefit to allowing random people to come to the U.S., become naturalized citizens and then start voting and eventually running for office.

If Ilhan Omar wants to praise her savage desert deity for smiting American with coronavirus, that is her business but she should be doing so from Somalia, not America.
Posted by Arthur Sido at 8:37 AM