With supply chain issues causing intermittent outages in stores and the general uncertainty surrounding life in America, many people are looking at "prepping" with a new found appreciation. One way this is manifesting is in people who have never gardened before talking about putting in a garden this year. I kind of dismissed it at first, gardening is outdoors and can be hard work.

Then over the last few weeks I got some requests to order seeds online for some Amish ladies. No problem.

Oh wait. We have a problem.

I got some from a place called Jung with no issues early on. Then I tried a few more places. I ordered from Seed Savers Exchange, the order went in fine but a bunch of stuff was out of stock, so I was given a second order and some of that was out of stock. I placed orders on March 24 and 26. Crickets but I assume they are coming soon. I went back today to look for some seeds for me. Oops.

Ok. I also got a request for an order from Johnny's Seeds. The website last week said they were swamped and would not be accepting non-commercial orders until March 6th. So I went back on March 6th and saw this. 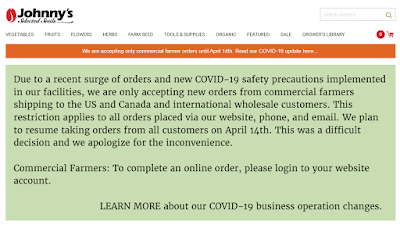 So I guess I will try again on the 14th, assuming anything is left.

That all seemed a little strange and more than a little concerning. Then this morning I was at an Amish greenhouse (yes they are probably supposed to be closed) and I was talking to one of the owners I know and she said they have never, ever sold this many seeds this early. She was beside herself at how much they were selling and it sounded like they were having a very hard time getting resupplied. The bins of seeds were pretty sparse already and the Amish ladies are just getting warmed up with buying their seeds so I assume they are getting a lot of English shoppers.

What all this is telling me is that anyone wanting to get a garden going this year better get busy buying their supplies because they are going to be gone very soon. People who are every-year gardeners might miss out on what they want if they don't act. It is clear that a lot of Americans are feeling very insecure about their food supply and with good reason.

Prepping is moving out of the shadows and into the mainstream so don't dawdle if you want to get your garden going, seeds are flying off the shelves like toilet paper was three weeks ago.
Posted by Arthur Sido at 5:00 PM