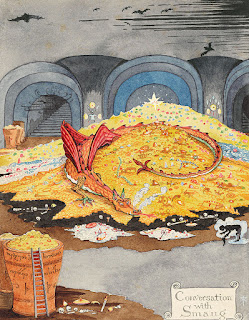 There he lay, a vast red-golden dragon, fast asleep; a thrumming came from his jaws and nostrils, and wisps of smoke, but his fires were low in slumber. Beneath him, under all his limbs and his huge coiled tail, and about him on all sides stretching away across the unseen floors, lay countless piles of precious things, gold wrought and unwrought, gems and jewels, and silver red-stained in the ruddy light.

Smaug lay, with wings folded like an immeasurable bat, turned partly on one side, so that the hobbit could see his underparts and his long pale belly crusted with gems and fragments of gold from his long lying on his costly bed. Behind him where the walls were nearest could dimly be seen coats of mail, helms and axes, swords and spears hanging; and there in rows stood great jars and vessels filled with a wealth that could not be guessed.

We can sort of understand a dragon's horde, even though they only exist in fantasy. A dragon laying on a mound of golden coins, jewels and other treasures is something we can wrap out minds around. Some of a dragon's treasure is worth a little less, like silver, and some more, like gold, and most precious of them all is the Arkenstone.

Gold doesn't have much inherent value. Unlike iron which can be made into tools or granite which can be formed into building blocks, gold is relatively soft and malleable. Still, gold has been considered a "precious metal" for much of human history. The Bible mentions gold in the second chapter of Genesis:

A river flowed out of Eden to water the garden, and there it divided and became four rivers. The name of the first is the Pishon. It is the one that flowed around the whole land of Havilah, where there is gold. And the gold of that land is good; bdellium and onyx stone are there. (Genesis 2:10-12)

The Egyptian pharaoh Tutankhamun (aka King Tut) who reigned in the 1300s B.C. was buried with a famous mask made of gold. The mask weighs 22.6 pounds. At the current price of gold of $1,702.18 per ounce, that mask in gold alone is worth $615,000 although the historical significance makes it priceless. 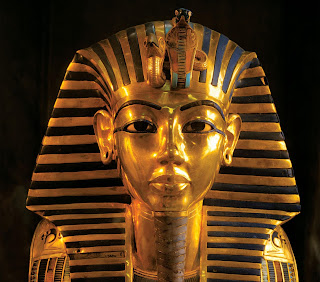 The average person can understand a 22 pound gold mask. We know what 22 pounds feels like and we know what gold looks like, as most of us have some sort of gold jewelry.

But $615,000 in cash? That is hard for most people to even comprehend. The average person has only ever held a few thousand in cash. Thanks to working in a bank, I often handled tens of thousands of dollars and once saw one million dollars in cash shrink-wrapped so I have a better grasp than most people.

In the grand scheme of things in America, $615,000 isn't a drop in the bucket, it is a molecule of a drop of water in a bucket. It isn't even a rounding error. However for the average American it is an unimaginable sum when thought of as currency.

This is a reminder, yet again, that our society is so enormous that the average person has absolutely no control or connection to most of our governance and economy. We are dealing in sums so vast that it is incomprehensible, not just to Bubba at the gas station but even to the most respected economists. It is an imaginary world and it operates by rules that are both arcane and completely made up.

This brings me back to a frequent topic, money and our relationship to it.

The recent stimulus bill included various spending items that in total came out to around $2 trillion. That is a sum that no one can really wrap their mind around, not least because it is all make believe. That doesn't matter to 99.9999% of people, all they care about is getting their TrumpBux and using that money to buy another gun wisely spending that money on essentials.

Most of us still think of "money" as "currency", in other words bills and coins. Most people would be stunned and a little concerned to realize that their local bank branch has only a fraction of the "money" they show on deposit actually physically present in the building. To put it another way, that vast majority of "money" in America exists only in a computer and will never exist as a dollar bill.

According to the Federal Reserve:

That is about $160 billion shy of the $2 trillion we just magically spent in the stimulus bill, much less the several trillion more spent as part of the annual budget.

On the other hand, the M2 money supply which is basically all of the "money" we pretend to us (see here for an explanation) is around $16.6 trillion. Here is a chart of M2 since 1980:

Over the last 40 years, the amount of "money" went from just shy of $2 trillion to over $16 trillion. Where did all of that money come from? That's a trick question, it came from nowhere. At the same time, in 1980 the national debt was around $900 billion. That is a lot of money but today the national debt is north of $24 trillion. I like to write that out for effect:

That is a really big number. Also of note, in 1980 the national debt was 32% of the Gross Domestic Product, so the GDP was around $2.7 trillion. In other words, the total value of the output of all economic activity in America in 1980 was triple what we had in debt. In 2020? The debt is about 108% of GDP, a level we haven't seen since the final year of World War II. In simple terms, what that means is that if we took every shred of economic activity in the United States in 2020 and applied 100% of it toward the debt, we still wouldn't pay it off. Plus we would all starve to death. So we are kind of in trouble.

Back to the money supply. Here is a chart from the beginning of 2020 to now.

Over a trillion dollars in "money" magically appeared since the beginning of the year. Where did that come from? I suspect something like this:


The amount of "money" we have is completely arbitrary. It has no basis in reality. If we need more, we magically make more. No one questions it other than cranks like Ron Paul, and no one questions it because the whole house of cards we call the U.S. and more broadly the world economy relies on no one asking too many questions.

Again the reminder that a dollar bill is "worth" a dollar because we all agree that it does. Why does a gallon of milk cost 3 of those dollars? Because that is what we say it is worth. Why does your job as a welder pay you 18 dollars for every hour we work? Because that is what we say it is worth. Is an hour of work as a welder really equivalent to six gallons of milk? Who knows? With all of the artificial tinkering that goes on with costs and wages, there isn't a real equivalence between one thing and another. The price of a gallon of milk is the result of both demand and production costs for raising cows, feeding and milking them and then selling the milk to a dairy distributor who then processes the milk and puts it into gallon jugs as well as turns it into yogurt and cheese before shipping it to a retailer who then transports the milk and stocks individual stores. Sounds simple but there are a ton of places along the way where the government is intervening, from the actual cost of milk to subsidies and regulations regarding the feed that goes into cows to inspections and fuel taxes on the gas used to transport the milk. I could probably figure up a reasonable cost per gallon of a single cow I owned and milked for my family but trying to expand that out to the national retail average price of a gallon of 2% milk? No way.

The whole thing is insane. Billions of people trading goods and services based on an unspoken agreement that we will pretend that "money" that doesn't exist is actually worth something. We add trillions to the misnamed "debt", which really should be called something else since we are never going to pay it back, and almost no one seems to care.

A debt driven, fiat currency based economy is inherently unstable and we are facing a serious crisis and soon. Tax revenue is likely to be drastically reduced this year as the economy tumbles but spending is way up. Interest payments of make-believe money on make-believe money are eating up more and more of the budget. At some point one of two things will have to happen:

One, we will have to enter an inflationary stage where the "value" of money is inflated in order to keep making payments on the debt, and still be able to engage in entitlement and discretionary spending.

Two, we will have to default on interest payments and that will make the once gold standard of safety, U.S. Treasury backed securities, a lot less attractive so either they will stop selling or the U.S. will have to jack up interest rates to attract investment (this eventually is what leads to "junk bonds").

Should Trump lose and whoever Biden is told to pick as VP takes over, it is likely spending will accelerate and this whole process will quickly spiral out of control. Even if Trump manages to win re-election, he has shown no appetite for fiscal restraint and at this point what does it even matter? There isn't a realistic way to pay it back even if a politician had the courage to try.

Like our government, our economy is simply too large to comprehend and control. It is long past due we start talking about dissolving the union and forming smaller, easier to manage new nations.
Posted by Arthur Sido at 3:21 PM