... Already long ago, from when we sold our vote to no man, the People have abdicated our duties; for the People who once upon a time handed out military command, high civil office, legions — everything, now restrains itself and anxiously hopes for just two things: bread and circuses.

Someone posted this very solid quote from Robert Heinlein at John Wilder's site, I checked it out to make sure it was accurate and it was so here it is:

“The America of my time line is a laboratory example of what can happen to democracies, what has eventually happened to all perfect democracies throughout all histories. A perfect democracy, a ‘warm body’ democracy in which every adult may vote and all votes count equally, has no internal feedback for self-correction. It depends solely on the wisdom and self-restraint of citizens… which is opposed by the folly and lack of self-restraint of other citizens. What is supposed to happen in a democracy is that each sovereign citizen will always vote in the public interest for the safety and welfare of all. But what does happen is that he votes his own self-interest as he sees it… which for the majority translates as ‘Bread and Circuses.’

‘Bread and Circuses’ is the cancer of democracy, the fatal disease for which there is no cure. Democracy often works beautifully at first. But once a state extends the franchise to every warm body, be he producer or parasite, that day marks the beginning of the end of the state. For when the plebs discover that they can vote themselves bread and circuses without limit and that the productive members of the body politic cannot stop them, they will do so, until the state bleeds to death, or in its weakened condition the state succumbs to an invader—the barbarians enter Rome.”

I am on record opposing the "every warm body" model of democracy for these very reasons. America in Heinlein's time was a near paradise compared to today, but in 2020 the ratio of producer to parasite is skewing heavily and unsustainably toward the parasite class.

Over twenty million Americans are recently unemployed. Tens of millions are working from home. Hundreds of millions are getting "stimulus checks", a combination payment to help pay the bills and a bribe to keep people from rioting. An America that was already sedentary has turned into a nation of hermits. The powers-that-be are counting on bread ("stimulus money" and food stamps) and circuses (endless streaming entertainment) to keep us pacified. That might work for the average American who is already law-abiding and tends toward obeying authority reflexively but there are already limits appearing when it comes to how long we will put up with this and of course in the areas already prone to lawlessness, adding in cops stepping back plus convicts being released early, and with warmer weather on the way, civil unrest seems likely if we stay shut down for much longer. 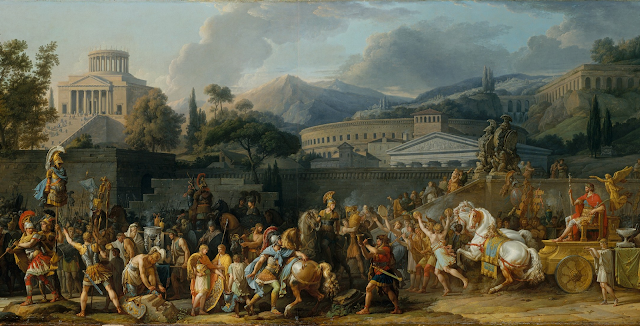 The bread and circuses model has a bunch of flaws but the fatal flaw is that it requires endless escalation of both to keep the crowds happy. Back in the day, the spectacle in the arena had to be more and more grotesque to keep people sated. As people today burn through TV shows and movies, they are going to start getting bored and restless. In the same manner, the first stimulus hadn't even hit our accounts and Congress was already talking about a second (and third, fourth, etc.) round. There is a bill being proposed to give Americans a backdoor Universal Basic Income of $2,000 per month for the duration of the pandemic, which could easily turn into permanent state of crisis. In our case, my wife and I would get $4,000 per month plus an additional $500 per child at home (up to three), or $5500 per month which is equivalent to $66,000 per year. The median household income in the U.S. is less than $64,000 per year so for most families with would be a raise, and a very significant one for a young couple with three kids. Even for us, that sort of "stimulus payment" coupled with what we already earn would be more money than we have ever made. Looks like daddy is getting that Barrett .50 BMG after all!

How long is it sustainable to pay a family of five $66,000 per year for not doing anything other than refraining from rioting? For millions of Americans, people in low wage jobs in the service industry for example, they would get a huge raise in pay. They won't save the bulk of the extra money, they will adjust their spending habits to use it up and then when the "stimulus" payments stop, they will be in serious trouble. Believe me, as a former banker I saw this happen all the time. I was a manager for a couple of banks in an area with a sizable Indian reservation and when the Indian kids turned a certain age they got a bunch of money from some government trust fund and like the sun rising in the east, they blew through that money in no time and were right back where they were in poverty.

Things like a culture-wide death spiral take on a life of their own and that is what we are seeing right now. I get the sense that things are slipping out of control at the highest levels and everyone is trying to keep a lid on the pot. Trump seems very nervous and unsure of himself when he isn't belittling the media (and that never stops being funny). I have to assume he understands how delicate the balance is right now and that it won't take much for it to get out of hand.

You can only bribe the people with their own money and with debt piled on the heads of their grandchildren for so long. I am getting the sense that we don't have enough people bailing out water to keep the Titanic afloat for much longer.