Within the ruling apparatus are a number of people, perhaps even a significant majority of the residents of the D.C. metro area, who have been eagerly waiting for something awful to happen so they could use it as an excuse to rein in the American people. We clearly have slipped the leash a little bit, what with the whole electing Trump thing and continuing to buy guns by the millions and not blindly accepting the "climate change" hysteria. You can't blame them for wanting to bring us to heel. Plus a lot of them are just assholes who went into "public service" because they like bossing other people around.

With that in mind, the coronavirus, COVID-19, Kung Fu Flu pandemic is perfect. No one really understands how dangerous it is or is not and people started to freak out immediately. By putting on a concerned face and making soothing noises, the establishment is starting to squeeze the American people.

In my state, the police department in LaPorte declared they were no longer issuing new handgun permits or doing fingerprinting. 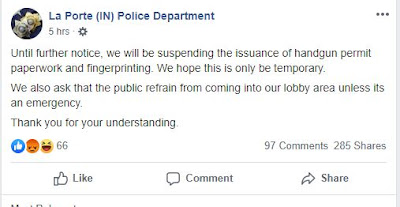 The comments shortly after they posted this were...a little angry. Then Wayne county declared a sort-of travel emergency. 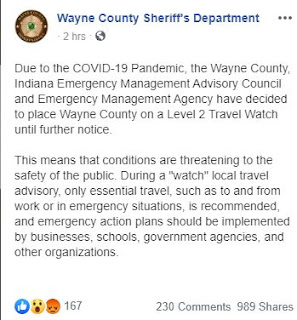 Wayne County is a sparsely populated (68,000 people) Indiana county on the border with Ohio, about equidistant between Indianapolis and Dayton, Ohio but it also contains a long stretch of Interstate 70 so it has an enormous amount of traffic. So what the hell does this mean and why? They aren't going to block traffic on I-70 so what purpose does this serve other than inducing more fear? You couldn't even fill a decent football stadium with every person in the county.

I mentioned earlier that San Francisco is trying to get 7 million people to "shelter in place", basically trapping them in their homes. Portland, Oregon is not sending cops out in person to what they consider less serious calls. If the police are going to start pulling back, I guess that leaves it to the citizens of the state to deal with criminal elements.

Pennsylvania governor orders all non-essential businesses statewide to shut down

Pennsylvania is closed for business.

Governor Tom Wolf announced Monday that a shutdown order in place for nonessential business activity and nonessential government offices in four counties was being extended statewide.

"This isn't a decision that I take lightly at all," he said. "It's one I'm making because medical experts believe it's the only way we can prevent our hospitals from being overwhelmed."

The list of exceptions includes "big box stores" so Wal-Mart will still be open plus places like vet clinic and laundromats. So only small, specialty mom-and-pop stores will be required to close. Very nice!

Down in New Orleans, the lady Mayor declared herself authorized to ban the sale of a specific type of legal merchandise, one protected by the Constitution.

She signed a follow-up proclamation on March 16, 2020, further emphasizing her emergency powers to “suspend or limit the sale, dispensing, or transportation, of alcoholic beverages.”

The declaration declaring the mayor’s power to restrict gun sales and transportation says she is “empowered, if necessary, to suspend or limit the sale of alcoholic beverages, firearms, explosives, and combustibles.”

This is why I don't live in cities and especially not in cities with mayors named LaToya. Sure, New Orleans (60% black) has a serious gun violence problem but those guns aren't being lawfully purchased by regular people. The guns being used are overwhelmingly black market, illegally owned gun and the thing about criminals is that by definition they don't obey the law. That is why they are criminals. The only people being harmed by this law are law abiding citizens who want to protect their families. Many gun stores are reporting record sales and are running out of firearms and ammo, and they also are saying a lot of their buyers are first time gun owners. How many people will be victimized in New Orleans because LaToya says they can't buy a gun?

Meanwhile Cam Edwards reports that other localities are not processing concealed carry applications.

Concealed Carry Applications On Hold In Many Places

Again, in a period of instability, making it harder for people trying to do the right thing to protect themselves is insane.

By next weekend, as cases continue to grow exponentially, look for even more draconian measures to be put in place.

Spicy time might be here before you know it.
Posted by Arthur Sido at 6:59 PM