Things Are Right On The Edge

Out here in the Midwest, things are getting a little sketchy. Our neighbors to the East in Ohio have closed all schools for three weeks and "banned" gathering of 100 or more people. Our local officials in Allen County are meeting on Monday and I anticipate all of our schools will be closed locally as well. The NCAA tournament, the NBA season, the NHL season, MLB spring training, the NRA Annual Meeting. Cancelled.

Against my better judgement I took some Amish friends to our local Sam's Club tonight. It was great fun. Here are some scenes.

Bread? Gone. The entire rack wiped out except for Hawaiian rolls. Flour? Gone. Beans and rice? Gone. Canned chicken? Gone. Toilet paper? Don't make me laugh. Bottled water? Gone except for the Members Mark water and they were limiting you to two cases. Pretty much everybody had two cases under their cart.

Obviously there is a lot of food still at the Sam's Club but the "staple" items people think they need are cleaned out. With the weekend coming and more bad news inbound, I expect to see this accelerate. A lady in line next to me was talking to someone else and she mentioned she had just come from Kroger and it was largely wiped out as well.

Everyone was mostly calm and polite, with a frustrated resignation akin to shopping right before Christmas. It seemed there was a sense of camaraderie in our shared suffering. I didn't really need anything but I still grabbed a few things like honey, sugar and protein bars plus a case of Corona just for the lols.

Still it seemed very tense and not far from something getting out of hand. The staff was unusually attentive and they were busting their humps for the most part. No one was fighting over anything, not yet anyway.

I don't think it is partisan of me to notice that most Republican leaders seem to be calling for working together to defeat the coronavirus while Democrats seem to be spending all of their time sniping at Trump and trying to sneak abortion funding into emergency spending bills. I maintain that Pelosi, Schumer and the rest of the DNC would be giddy to see the economy tank and millions sickened and dead because it might mean that Joe Biden has a better chance of winning against Trump even though Biden clearly has lost his marbles.

It seems like tomorrow and this weekend are going to be pivotal. The stock market has been hammered this week and the futures for tomorrow's opening look pretty grim. Sure I got gas for $1.84 tonight but those prices will kill oil companies. Inexplicably to me, gold and silver prices are plummeting, which seems counter-intuitive. Look at the gold spot price for the last three months. 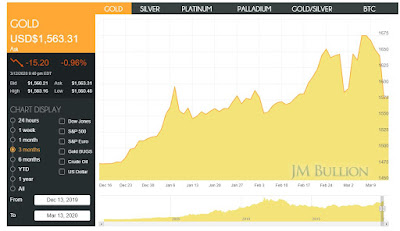 Over $100 drop in the last week. No idea, I am not a big precious metals market guy but it seems like a nice buying opportunity ( <--- not an investment recommendation).

This isn't really a serious crisis, at least not yet in the U.S. but based on what I am seeing, we are going to be in bad shape when a real crisis does happen. When things level back out, it would be a good time to reevaluate all of your supplies and think what might happen when a bigger crisis hits.
Posted by Arthur Sido at 9:51 PM