As recently as a few weeks ago, the 2020 election was shaping up to be Trump versus Biden in a pretty straightforward incumbent seeking re-election scenario. Trump was going to run on the economy and keeping promises (minus that pesky signature wall) and Biden was going to run on not being Trump and Orange Man Bad™. The race would come down to whether Biden could draw enough core Democrats and get them excited enough to show up. Oh, and if his handlers could get him to not paw little girls on camera or take a dump on stage during a debate. Really just not let him out in public at all. The media is even reduced to publishing stories just begging Joe Biden to not die. That is a pretty low bar: be alive. 2020 was going to be weird.

Then it all changed. 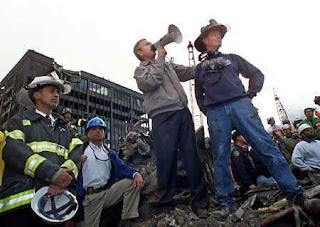 The Chinese virus, aka coronavirus, aka Covid-19, has the potential to change the election in a manner similar to how 9/11 changed the 2004 election. George W. Bush was stumbling around in his first term, having barely defeated Gore in a contested election. If you were looking at Bush on 9/10, you could have been forgiven for assuming he was going to be a one-term President. Then everything changed the next day. Just days after the attacks on 9/11, President Bush visited the rubble of the Trade Centers and in an unscripted moment said via bullhorn: "I can hear you. The rest of the world hears you. And the people who knocked these buildings down will hear all of us soon.". He won re-election right then and there. Watching that moment still chokes me up, even years later as I have come to suspect that we are not getting the whole truth or any truth from the government. We were wounded but Bush promised vengeance and that blood-lust carried him to re-election and embroiled this country in catastrophic wars that led to thousands of dead and maimed Americans and trillions in new debt. But Bush still got his second term.

What does Trump do now? The economy is in shambles and likely won't recover this year in spite of trillions of dollars in magical money. Unemployment is at over 3 million, a new record, after years of great employment numbers so he can't run on that. Whether it is as serious as we are being told or not is irrelevant to the political theater. Everything will come down to coronavirus in November, barring some subsequent major calamity.

If I were advising Trump, the message would be simple: Blame China for the coronavius and vow to punish them.

A more complex way of putting it would be to double down on his 2016 message of economic populism, making globalism the enemy both for spreading the coronavirus and also for exposing the danger of having so much of our manufacturing based in China. A message of nationalism, returning critical manufacturing to the U.S. and protecting American workers with China as the villain of the narrative, would work to bring working and middle class whites out to vote for Trump. Moms who are scared of their kids getting sick, and worse having to stay home with them for extended periods of time, will appreciate this message. Working class white men will as well. A small but potentially significant chunk of the black and mestizo voting population might find this compelling enough to set aside tribal politics. People of Chinese ancestry won't like it but don't vote Republican anyway and Asians of Korean and Japanese origin hate the Chinese already.  I think a lot of people are starting to realize that we are in some serious trouble and that having China controlling too much of our manufacturing, especially medical stuff, is a problem.

Sticking it to the ChiComs is a message that will resonate with a lot of voters, even people who might be inclined to not vote for Trump. They might not vote for Trump but maybe they will stay home instead of voting for a dementia patient. This will be an important electoral strategy and consideration for the Trump campaign:

Abstaining from voting against Trump might be more palatable than actually voting for him but the next result is the same.

Trump needs to be talking more and more about bringing home critical infrastructure and using the threat of a new, future pandemic as the catalyst. Instead of a "New Green Deal", he could have his own plan with government-backed investments for companies wanting to build manufacturing plants in America for medical supplies and pharmaceuticals, with stringent oversight of course. Add to that tariff protection for those industries so that it is no longer cheaper to make stuff in China. We might pay more for vital products but at least we won't be at the mercy of the Chinese. Using the Chinese as the bad guy will help deflect attention from the fact that he talked about a lot of this stuff in 2016 but didn't do anything about it.

Will Trump do this? If he is still listening to people like Steve Bannon and Tucker Carlson, and I think he is, he might. Bragging about how awesome his response to the Wuhan flu was isn't going to win him many votes. Taking the critical issue of his presidency, the China virus, and spinning it in a way to blame the Chinese, rightly so, and using that to reinforce an already popular message of economic, nationalist populism, might be enough to overcome a monolithic media determined to keep him from winning a second term.

Politics is mostly fake and gay but it is also a fascinating look at the human psyche. An entire election year of the media painting Trump as racist, another couple of years of ridiculous "Russia collusion" nonsense, and a bogus "impeachment" is all going to be irrelevant in November. It is going to all be about the China virus and Trump's response and his proposed path forward. He can win re-election and bring a lot of Republican down the ticket with him, maybe even winning the House back, if he plays this right. That will disappoint some of the controlled opposition China shills in the "dissident right" but a few more years of Trump means a few more years of prepping for the collapse and that seems like a worthwhile goal.
Posted by Arthur Sido at 9:34 AM