One of my favorite Youtubers, Donut Operator, posted a new video about an unarmed Black teen shot in the back by the po-leese for the crime of holding a pizza while black. The community went crazy. Not really a spoiler, but that isn't what happened.

The shooting led to protests with the tired, obligatory "No justice, no peace" chanting. Then the bodycam footage was released. Oops, turns out the "teen" had a gun, bolted as soon as police showed up with the gun clearly visible in his waistband and had the gun in his hand when the cop shot him. A lot of this was kicked off by a tweet from a relative nobody named Racquel Bethea. The tweet is gone but I took a screenshot from Donut's video.... 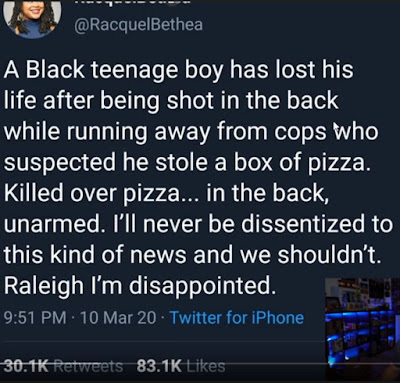 - The man shot was 26 which I don't think qualifies as a "teen"
- He wasn't shot in the back
- He wasn't suspected of stealing the pizza
- He wasn't unarmed.

83,000 likes and 30,000 retweets from an account with 170 followers. Clearly someone with some social media pull noticed this and spread it around. She has protected her tweets since the bodycam footage was released as I imagine she got some colorful responses and got caught lying.

It won't matter because the damage is done.

Police responded to calls about an armed man. Police arrive and Javier Torres bolts with a gun clearly visible in his waistband. By the way, he had filed or had someone file off the serial numbers on the firearms. He refuses to drop the gun or stop when ordered by the police. When another cop cuts him off behind a home, the gun has migrated from his waist to his hand. The cop can't wait to issue another command, in the time that would take Torres could have easily shot the cop and Torres had the gun in his hand, so the cop shoots him. This was an obviously justified shooting of an armed man. The split second encounter, driven by the decision of Javier Torres to arm himself with an illegal handgun, run from the police and take the handgun out of his waistband, left the cop with no other option but to shoot him.

That isn't what will be remembered. To the black community this is another Black Body being gunned down by the police. The damage here is done. No one remembers that Michael Brown was an enormous criminal trying to take a gun from a cop, nope he is just another Black Body gunned down for no reason. Trayvon Martin was trying to bash a Hispanic guy's head in when he was shot but we still get the martyr narrative complete with pictures of Trayvon as a little boy instead of the glowering, pot-smoking thug he was when killed.

The black community is inundated daily with stories like this. The cops are racist, they are hunting down and shooting black men for no reason at all, white people are super dangerous, even when blacks shoot other blacks it isn't really their fault because of "systemic racism" and "Jim Crow laws". This in turn leads to people not helping the "racist police" which means crimes don't get solved in their community and then those criminals go on to commit more crimes, again in the same community. Ja'danquelle isn't coming out to my neighborhood to cause trouble, he is causing trouble in his own black community. What is worse, this creates a barrier in the black community to asking the hard questions, like why young black men think that every dispute needs to be resolved with gunfire.

The shooting of Javier Torres, an "unarmed black teen" who was 26 years old and had a gun in his hand, is just the latest example of how casually people lie in America. It is no wonder we are on the precipice of calamity.
Posted by Arthur Sido at 10:27 AM