The Coffee Has Landed!

The trial and travails of my coffee order finally came to a conclusion yesterday with the delivery of my Black Rifle Coffee Company order. From February 24th to March 4th, my box of coffee traveled the nation and a rather small and light box took ten days to arrive. Ain't government efficiency grand? At least I have my coffee. 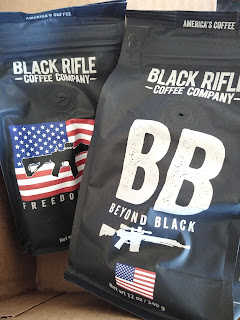 The USPS doesn't care that it took a small box of coffee ten days to get to me or that their "tracking" system had no idea where my package was for days at a time. It is just a giant monopolistic government agency that is lumbering, inefficient and uncaring. It is not coincidentally the same sort of massive bureaucratic boondoggle that people on the Left want to put in charge of all of our health care. That will be great!

Meanwhile, I reached out on March 3rd to Black Rifle Coffee to see if they could help me track down my coffee order. I sent my email requesting help at 8:34 AM. By 9:11 AM I got a reply from Alejandro at BRCC. He had already ordered me a free replacement for my three bags of coffee and was sending them expedited shipping. I had also ordered a t-shirt and he sent me a new shirt as well, and told me that if the original package showed up, I should just keep it for the delay. Now THAT is customer service, way above and beyond what I was asking for or expecting.

BRCC charges a premium for their coffee because it is premium coffee. They are veteran owned and largely veteran operated. Here is their story:

They are pro-America, pro-veteran and pro-2nd Amendment. I first had their coffee at the NRA Annual Meeting and have been a customer ever since because I believe in supporting people who support the same causes I do.

On one hand, we have a giant, uncaring, inefficient organization subsidized by the government that can't be bothered to deliver a simple package in a reasonable amount of time.

On the other hand, we have a nimble, responsive company offering a premium product and exceptional service.

Seems like there might be a lesson here. Enormous organizations with no real pressure to be efficient or responsive give the sort of crappy service I get from USPS on a regular basis. Smaller organizations fighting for market share tend to be responsive and customer-friendly because they have to be in order to survive in a highly competitive marketplace.

To be clear: there is an enormous difference between small, privately owned firms providing quality products and exceptional customer service versus globohomo corporate behemoths that operate functional monopolies with the tacit approval of the government. The "free market" means the free and fair open exchange of goods and services but what we have, and have had for a long time, is nothing like that. Our "leaders" sign trade deals that benefit the bottom line of monstrous companies while screwing over American workers. Those same "leaders" import workers by the millions, not because we don't have enough workers, but because those workers will do substandard work for a markedly lower wage. In return these giant globalist companies buy and sell Congress like beanie babies on eBay. When he is not threatening Supreme Court Justices, Chuck Schumer is getting paid by Wall Street lobbyists to the tune of $3.3 million from 2013-2018. I am sure he is going to pass legislation that will hurt Wall Street if Bernie or Biden becomes President. Oh, and "conservative" Mitch McConnell got over $2 million from Wall Street in that same time period.

Thanks to Black Rifle Coffee Company for taking care of my problem, quickly and exceeding expectations. That won you a customer for life.

As for the USPS, I would tell them off but they just simply don't care.
Posted by Arthur Sido at 1:00 PM